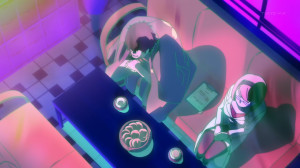 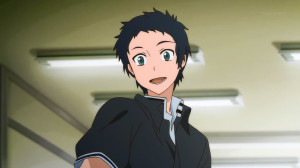 That town is certainly never lacking in excitement. The episode was not so much about the action as continuing to flesh out the main cast a little and really to give more perspective on the town they are all living in. While it all sounds nice to have various kinds of beings living in a town it goes to show the relationship is hardly perfect. There’s bound to be discrimination and strain between different forces working in that town. Probably makes it all the easier for someone with negative intentions to cause havoc since there is some distrust out there already.

Honestly that Senate organization just seems like a shady bunch. At best they just have their bias towards humans at worse they are a discriminating group who want absolutely nothing to do with the youkai in the town. While Kyosuke’s question might have been a bit unfair, the fact that they had little trouble answering it is unsettling. Wanting copies of records of the youkai citizens and practically treating them like offenders to be monitored. While when youkai snap they can do plenty of damage in all likelihood, the fact remains that people can do the same. A person just needs to find a gun or some other weapon to cause havoc. I’m sure the tenseness with those in that kind of group will remain pretty prevalent throughout the series. 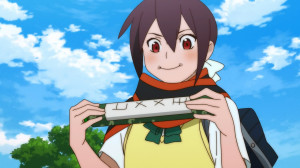 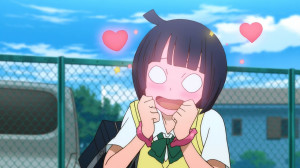 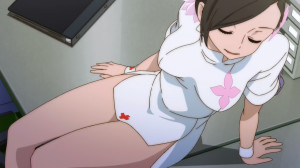 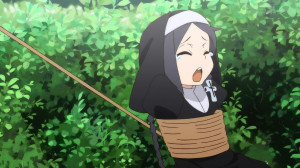 At least we are getting a good picture of what the cast are up to on a regular basis. Seems Akina and Ao work pretty well full time for the Hiizumi Life Counseling Office. While Kyosuke does spend some time there, his focus seems to be keeping an eye on Hime and keeping her out of trouble XD. That certainly seems to be a full-time job outside of when she’s at school. You have to wonder the effectiveness of having a Mayor who is also a full-time student. Not a lot of free time to take care of everything in a day. Both Kotoha and Touka are students as well though clearly have some working connection to the Counseling Office.

Certainly the series isn’t hiding Touka’s interest in Akina while it seems the other member of this potential triangle is Hime. Though doesn’t seem to be anything pressing going on there from Akina’s perspective so may just be a light point that runs through the series. Another point of note is Ao’s brother from that photo. Someone that clearly isn’t hanging around the office, but shares some similarities to the guy causing trouble in the first episode. And certainly can’t ignore those letters that Lilly has been sending around. They can’t just be for kicks, not from someone that sinister looking. Maybe they have some influence on those who possess them or have some other use. Certainly keeps the girl on their minds and she’s bound to turn up as a threat sooner or later.

I guess with humans and youkai living in a city the existence of land gods shouldn’t be such a surprise. Though between a quick striking swordsman in Yae we have her brother who just seems to be a short and semi-perverted guy. Though does seem to be more focused on the rules and not interfering more than absolutely necessary. That does tie in with the decent amount of fanservice going on in this episode. From Kotoha and Yae getting felt up, to Ao’s little panty shot in the early going. And who can ignore the way Ao stopped Kotoha’s rampage there XD? Actually Juri’s scene was pretty full of that too, so many it’s more of a semi-constant thing with the series outside of the action scenes. 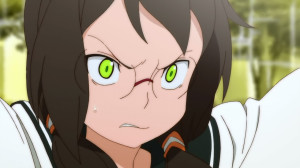 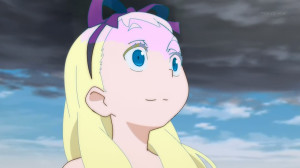 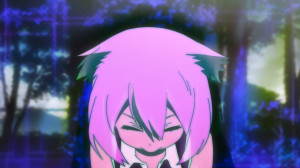 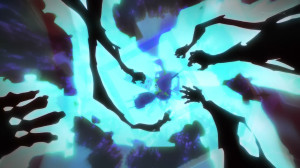 It also went to show how utterly haxed Kotoha’s ability is. The ability to quickly conjure up objects is pretty damn crazy. Of course what we saw from the poi conjuring is that she probably has to mentally construct the objects the first time around and certainly her physical abilities aren’t above the average person. Hime on the other hand despite being called human has some crazy physical abilities so looking forward to getting an explanation on that front.

What was a bit unsettling was the scene near hte end of the fight. Somehow that Lilly was able to mess with Kotoha’s head and show the dangerous side of that ability. She likely had an influence on what happened at the Counseling Office as well. The flashback certainly gives the strong hint that something horrible happened when Kotoha was younger. Certainly possible with that kind of power. Seems like something happened with Touka in the past as well. Can imagine the trouble since apparently she and her brother are Oni and need those bracelets to regulate their power. Goes to show how tough it is for youkai or half-youkai individuals since they do have powers that can cause havoc and have to be on even better behavior than the average person.

OP [Sakura no Ato] by UNISON SQUARE GARDEN: (B) 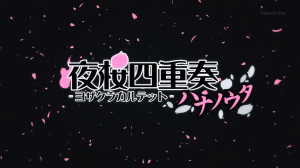 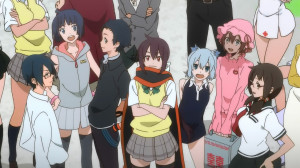 I think the OP is alright. The song itself didn’t really pull me in that much. It wasn’t a bad song, just not a style that I cared too much for. Visually the OP was pretty busy trying to introduce as many characters as possible along with their abilities. Not a bad way to keep track of who can do what, but it’s a pretty faced pased visual to follow.

ED [Tsukiyomi] by phatmans after school: (B+) 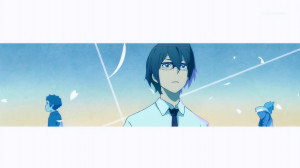 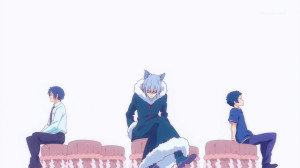 The ED I thought was pretty solid. The song itself is pretty relaxing and a good way to wind down after an episode. It’s focus is much more focused on the main guys in the series. Reflecting some relationship there between Kyosuke, Akina, and that third guy from the first episode. Not the busiest visuals that’s for sure, but it was alright. 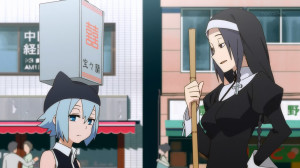 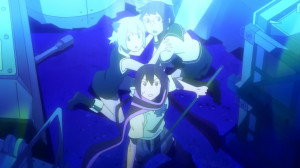 Overall a decent second episode. Things are building and we’re getting additional background on the cast which is good. Looking forward to finding out more about this town and seeing where the story goes.
Score: B+