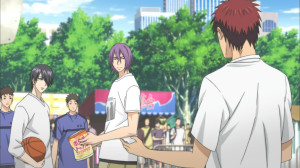 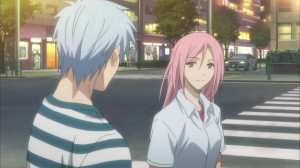 Another solid episode of Kuroko no Basuke that was light on sports action but continued to develop the stakes and story for the series.

It was a bit disappointing that the match between Seirin and Yosen was cut short due to rain, but there were still some interesting moments as a result of the meeting.

Murasakibara got the focus of the first part of the episode, as the series introduced yet another interesting character from its Generation of Miracles. Murasakibara is actually the sort of athlete that’s pretty commonly found in the High school level, who has the talent and likes to win, but really isn’t passionate about the sport itself. For Murasakibara its more about winning and talent than anything. 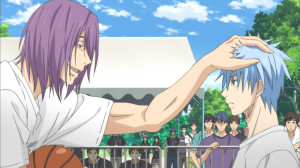 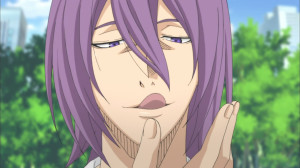 He’s a character that’s pretty common in sports manga as well, as he’s got the whole “Talent over hard work” angle to him. What makes it rather interesting is how dumb and childish the guy is. The overall impression then, is a high school student that’s exceedingly tall and talented, a brute almost, that doesn’t seem to be too bright otherwise. Its interesting twist, and a welcome difference from a group of athletes that not only have played good, but looked good and cool as well. 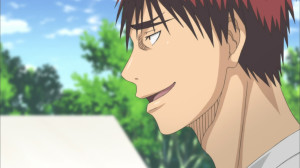 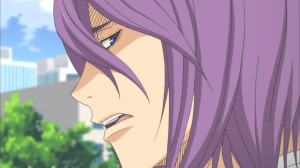 It was pretty funny to see Kagami pretty childishly provoke Murasakibara into the match. Of course, while a genuine display of skill from Yosen would’ve benefitted Seiren greatly, the match stopped before anyone could really do anything. Of course, not content to have their reunion end on such an anti-climactic note, Tatsuya showed Kagami a special technique of his. 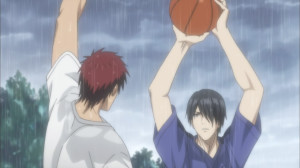 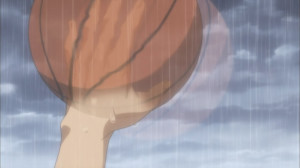 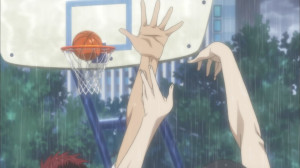 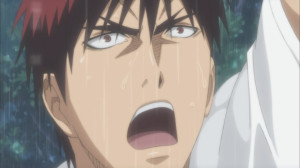 It seems that this throw of his has some turning or slight of hand at the last moment, changing the direction just a bit, rendering a standard block meaningless. If anything, this shows that Tatsuya is well up there in terms of threats that Seirin will probably face in the Winter Cup.

A good chunk of the rest of the episode focused on The Generation of Miracles, and we got some answers for why the three big players didn’t participate in the inter-high. It was really interesting to note that the Generation of Miracles actually have some kind of weakness, despite how friggin powerful they are. Much like how Kagami’s impressive growth injured him, Aomine ended up injuring his elbows in the match that he and Kise had near the end of season 1. 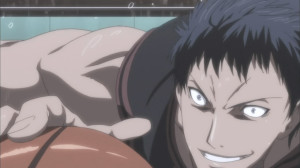 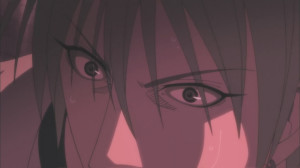 The double edged sword of the Generation of Miracles’ talent, is an interesting one. Yes, they have insane talent, but since they are still high school students, their bodies can’t take the toll. Its a welcome dose of reality injected into what has been a series that has begged for a strong amount of suspension of disbelief. 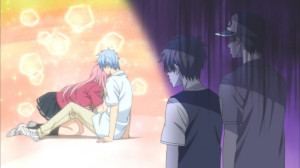 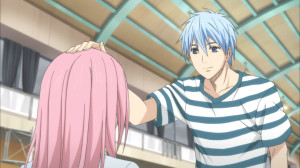 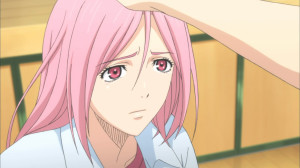 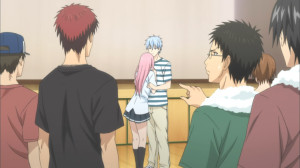 It was also interesting to see Kuroko, as shadow-like and unnoticeable as he is, really take care of Momoi and get her through the fallout she had with Aomine. I’m not exactly sure I buy the fact that she’s actually attracted to Kuroko, I’d say her affections for Aomine seem more genuine. There is literally no chemistry between Momoi and Kuroko. Then again, Kuroko is perhaps one of the most intentionally bland characters in this series XD 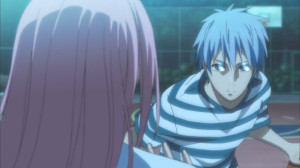 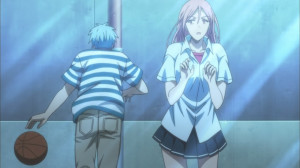 It was good to see Kuroko get some of the spot light near the end though. I remember at the end of Season 1, Kuroko promised he’d get better and stronger. If the last few moments of the episode are any indication, its that Kuroko is going to change in a big way. Kuroko’s new technique, focuses on agressively rushing in forward with the ball, something that is the polar opposite of his misdirection passes. It’ll be interesting to see how Kuroko’s new weapon will work in actual matches, and whether he actually has the stamina and the play style to actually accommodate it.

All in all, a pretty good episode. We’ve met pretty much all the key players, except for Akushi (The captain of the Generation  of Miracles). I’m assuming the story is keeping that reveal for later in the actual Winter Cup, and I can’t wait for things and the matches to actually get under way. Two episodes are setup are good, but any more is really going to start pushing it. 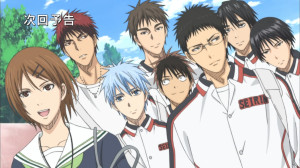 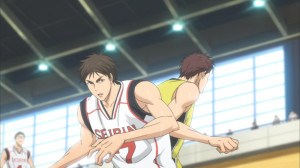 Speaking of which, seems like we’ll get an actual Basketball match next week. See you then!