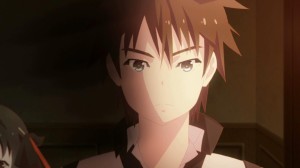 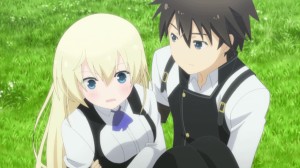 I will certainly always welcome a new fantasy series since they are some of my favorite. Unbreakable Machine-Doll or Kikou Shoujo wa Kizutsukanai, seems like it could be another good one. The main character Raishin is probably one of the stronger leads in terms of personality that we’ve seen so far. We don’t know a whole lot about what is driving him except that it is revenge. Something happened that was big enough to push him to come all the way to this school and struggle just to enter the festival. And by festival it appears to be a bloody series of battles between the elite puppet masters of the school. Not exactly something you would enter out of casual interest. Sure the winner gets the title of Wise Man and all the benefits that come with it, but that’s a crazy title to aim for. It’s worth sticking with the series if only long enough to find out why Raishin is there and what he’s really trying to accomplish.

His partner in this adventure is Yaya. A top of the line automaton who clearly is a bit crazy. Well that or just completely obsessed with Raishin and trying to get him to fall in love with her XD. A good shift from the norm with the girl being so determined, but not having a whole lot of luck. Of course Raishin has two issues being his focus on attaining his goal and the fact that Yaya is a machine which probably creates some tension. I’m sure she’s not going to give up any time soon so Raishin will just have to get used to her trying everything she can to get his attention and eliminate rivals… 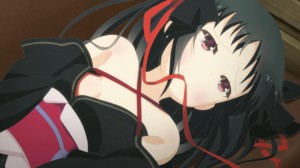 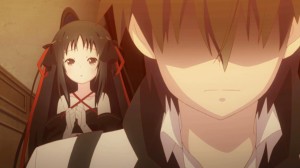 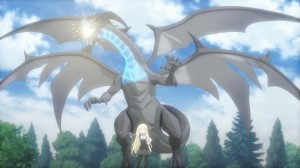 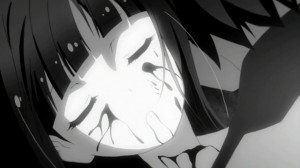 I like the overall setting of the series. Magical puppet masters who control these automatons in battle. It sets up a nice dynamic between fighter and support. Certainly makes sense that those with the stronger abilities and battle sense will go further in that world. It’s kind of shocking that Raishin has such a horrible score. He didn’t seem incompetent when it came to that battle. He and Yaya crushed quite a few of the enemies which should put him higher than his ranking would make you think. But maybe the key is that his power isn’t as high and Yaya being so elite makes up the difference. Or maybe his power just manifests a bit differently from the average user. I’m not sure, but we’ll probably find out sooner or later.

The other puppeteer that got a lot of focus in the first episode was Charlotte. If there is a female lead on the human side it would certainly seem to be her. At the very least she’s a fitting rival for Yaya. In comparison to the openly affectionate Yaya, Charlotte is more a classic tsundere type. Though clearly she has a lot of problems interacting with people. Kind of worrisome what she did just to her own former roommate and girls who tried to recruit her to a club…But this is a place where battles are the norm so maybe trust is something harder to have for those who are near the top. She doesn’t seem that bad, just determined and not really that honest with herself. Lucy for her Raishin seems to have a soft spot for the girls or at least picking fights with the injured.

The big scene really was the fight with Sigmund and Yaya vs all those automatons. While people might not like the effects for Sigmund I think it’s alright. Probably easier to mix that kind of thing into the series visually to save some budget. Though in terms of visuals I kind of wish the eyes and faces were drawn a bit differently. It just wasn’t quite linted up with my visual esthetic. Maybe it was actually really nice and I’m just crazy. At least the action was pretty good and I’m looking forward to the fights ahead. Some series might be able to get by with limited action, but this really is an action series. Raishin barely gets through the episode before picking another fight and I’m sure that pattern will continue as the story goes along. 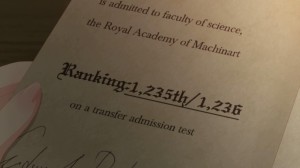 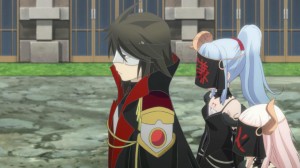 Overall I enjoyed the first episode and am looking forward to what is ahead. Not sure how good this series will be, but I’ll be keeping an eye on it. If the series brings us some good action along with a solid male lead then the combination should work out well. It might have some harem possibilities, but right now it’s only two girls and that’s nothing too crazy.
Score: B+