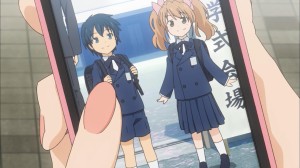 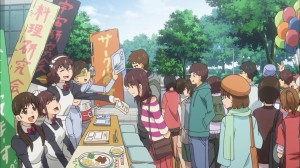 I thought this episode was a good follow-up to the first episode. The focus staying on Banri and his adapting to this new school environment. He’s starting to get his feet under him and managing the growing group of friends that he’s starting to pick up. It’s not quite easy to manage the almost contrary position he has to play between Mitsuo and Koko. Also throwing in his struggle to deal with all the circles and the connections being made to Linda and Oka. There’s quite a bit going on and that’s not even considering the fact that he’s got University classes to manage XD.

Good thing for Mitsuo that first year in Japan isn’t quite the same as North America. I can’t recall if I was able to pick more than one class in my first year with how many classes I absolutely had to take. But I suppose that’s another culture for you. All I can say is that Mitsuo would be utterly doomed if he wasn’t taking classes in a place like that. At least he can play the roulette of not taking any classes at the same times as Koko is. A bit of a risk, but certainly better for him than the alternative I guess. 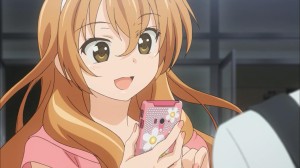 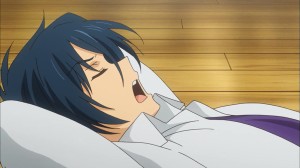 I did like how they aren’t putting off any sort of clash between Banri and Mitsuo over the Koko issue. It’s impossible to miss that they are on very different sides of the fence on this. Yet Banri surprised me by taking a mature path on this issue. Yeah they have very different points of view when it comes to Koko. But how they think about things and how they feel are their own personal issue. He’s not going to make Mitsuo interact with Koko if he doesn’t want to and of course he’s not going to sell him out either. Both guys can just agree to not agree on that issue, it shouldn’t impact their friendship. Everyone has different points of view. Expressing them is fine, but there is a line where you are just forcing yourself onto someone.

Certainly I can see how Mitsuo ended up feeling this way. He was with Koko for all that time, but no one took his complaints seriously. From his parents to people at his schools. They all just took the perspective that he should just be happy with it because Koko’s attractive. Few probably considered how tough that position would be. Utterly smothered and not feeling like you had any choice in your actions or who you could spend time with. While I don’t feel this is a solution, I’m not surprised he initially felt it was the same as always. Probably not easy to keep a lot of friends in that position either. At least things with him and Banri are going fine. Which is good since while Mitsuo and his parents aren’t getting along he’ll be in need of handouts from Banri’s mother to stay alive XD. 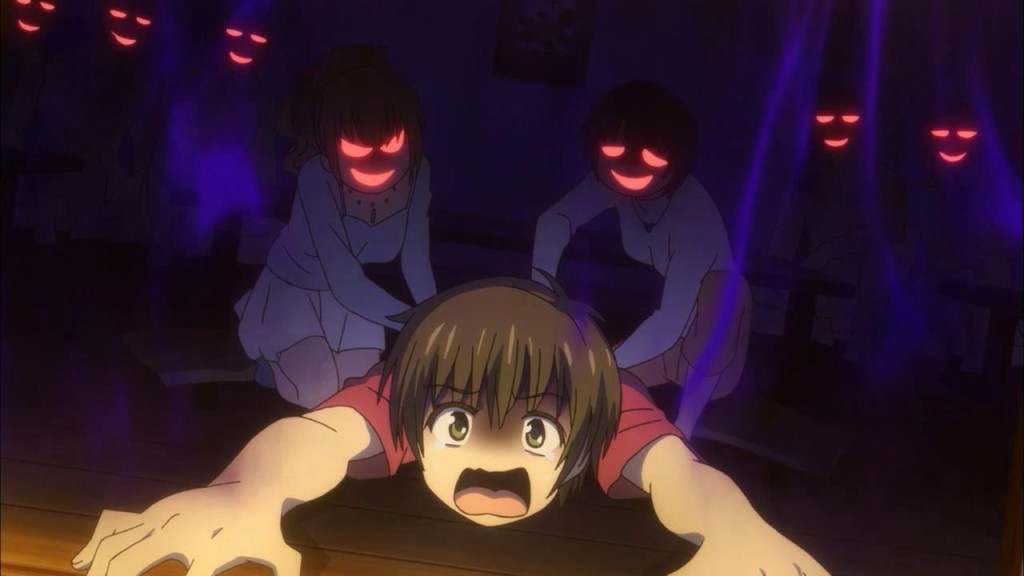 I have seen hell….and there is tea there!

I guess that scene at hte end of the previous episode was a flashback to an accident Banri was in. Looks like afterwards he left the hospital and got himself into more trouble. Maybe just me, but can’t help seeing similarities between Linda and the girl he ran into at the end of that dream/flashback. Maybe nothing, but in a series like this I wouldn’t be surprised if Linda and Banri have met before. Certainly feels like there is something more going on with her than just being a helpful stranger. Still, Linda is certainly a good person. Has helped save Banri from the barrage of clubs twice in a row now. Might not be a bad idea to join up officially with her club just as a shield from the other groups that are trying to recruit like there is no tomorrow.

The episode wasn’t all seriousness though. The whole scene at the Film Club was a lot of fun to watch, maybe not so much for Banri to live through….It started off well enough hanging out with Mitsuo and eventually Oka who apparently is a member. Nothing too strange about that though since she did mention her interest in watching attractive people. Certainly the people they get to act in whatever the film club is doing will probably attractive people. Really it lets her watch and have a very good reason for doing so. A pretty win/win place for her. Of course everything went to hell when the Tea Club struck. I swear that’s the most insane tea based organization I’ve ever met. I guess they do reflect the rowdy part of campus life and maybe even those groups that do nothing but make life hell for it’s new members. A lot of binge drinking and forced into some wrestling match…yep that’s probably not the top club on Banri’s list. 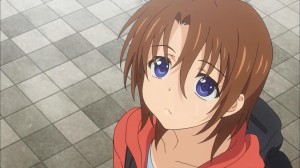 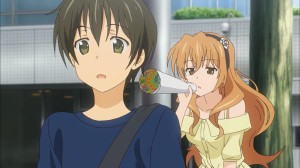 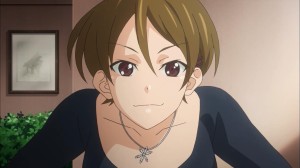 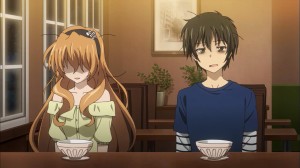 With Koko things were up and down this episode. It took until the very end for Koko to get Banri’s name down. I’m not sure if that’s because she can’t keep anything in her head if it’s not related to Mitsuo or if she’s bad with names. Frankly I’m terrible with them so I can’t immediately read someone who isn’t remembering names the first time around as just being rude. While Koko might not understand Mitsuo’s feelings or is trying to ignore it at least she understands that Banri isn’t going to give her all the answers. She probably understands the position he is in and how Mitsuo doesn’t want him to tell her what he’s up to.

Still she did help save him from the tea club. That aura she has up definitely is handy at times. Koko has put herself into a tough situation. Back in her old school while she was so focused on Mitsuo she probably still had some friends. Right now she’s jumping into a new environment and isn’t easy to approach. Dresses well and just gives off the impression of a rich girl who wouldn’t want to have anything to do with others. Unfortunately it’s not all wrong since she is so focused on Mitsuo, but it’s not quite right either. I think she’s started to feel how isolated she is though. Without Mitsuo around she’s really lost and unable to find a way forward. Throw in everyone keeping their distance and she couldn’t feel much more alone if she tried.

What might just save Koko in the end though is people like Banri, but also that club recruiter. If people have issues with Koko there is someone that refuses to read the mood at all. She just grabbed those two and chatted them up until it was dark and they had little choice but to spend some time with her club. At least Koko wasn’t feeling lonely by the end of that day XD. Have to say in terms of progress things actually went pretty well for Banri. Koko finally got his name down and he’s even going to that club event with her. It’s not like she’s remotely close to giving up on Mitsuo, but progress is progress. 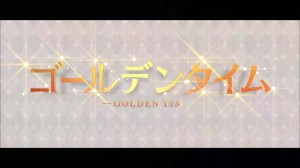 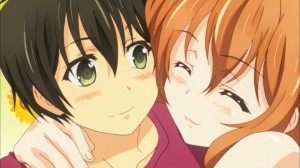 The OP definitely has plenty of pop and energy which works for a series like this. You are lining everything up nicely when the OP is named after the series. I really enjoy the song and will say Horie Yui does a great job singing it. Just sounds like a fun song which I enjoy in OPs. Can see myself watching this week in and week out for quite a while. Visually it’s a pretty busy, but focused OP. They don’t hold back on beating the viewers over the head with the main pairing in this series. If anyone is going into it wondering if Banri will get involved with say Linda or anyone else this really does a good job keeping everything in perspective. Banri and Koko pretty much are the only people in the OP and it works fine by me that way. It’s certainly one of my favorite OPs from the fall season. 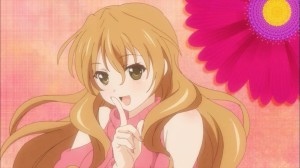 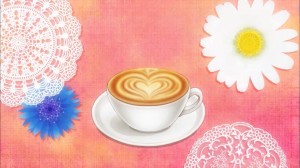 The ED definitely works in conjunction with the OP. It continues the theme focusing on Koko and reflect just how important romance is to this girl. The whole thing feels like prep for a date from her selecting her outfit to waiting for her ‘partner’ to arrive. It is pretty simple visually focusing on Koko in these mini-scenes, but they are pretty nice. They do a good job making the point that yes she is a very cute character XD. The song like the OP is really quite nice. It’s a softer song which makes sense since this is the ED. Makes sense since this is most definitely the Horie Yui show XD. Singing both the OP and ED and voicing the female lead. They are definitely making the most of the talent they have available in this series. 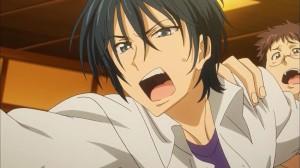 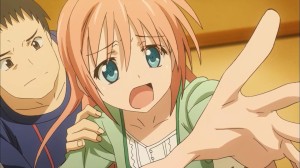 I have to say this series does give me a good feeling going forward. I’m going to like seeing where things go with Banri and Koko of course, but the secondary cast isn’t bad at all. Curious to see as well how Mitsuo will respond when Banri does manage to make some more progress with Koko. With that OP it’s bound to happen and I wonder if he’ll just be relieved or think she’s using him for some nefarious purpose XD.
Score: A-