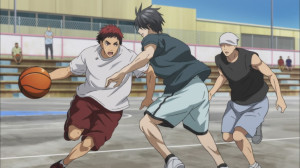 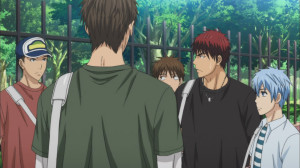 Now that’s how you do a sequel premier! The second season of Kuroko no Basuke (Kuroko’s Basketball) opened up with an episode that refreshed our memory on the key players, while introducing us to the new elements that will have a huge role in the events to come. 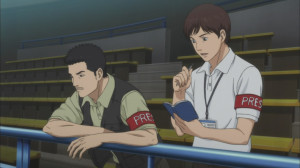 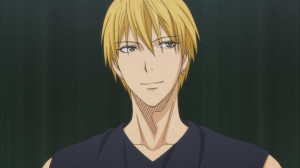 The whole idea of the Generation of Miracles was at the forefront of the premier as well. What’s perhaps most interesting is that even though the high school Rokuzan ended up winning the Inter-High, it was without the use of its Generation of Miracles member. In fact, none of the top three schools ended up using their member, further cementing a deep air of mystery. 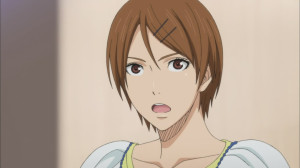 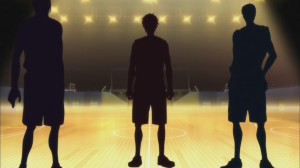 Of those introduced, Aomine seems like one of the strongest if not the strongest one out of all the Generation of Miracles players. Of course, there’s still two more players that have yet to be introduced. Half the joy of the series is really seeing what kind of crazy specialty or power the remaining two have, and in essense, which of these three is the strongest.

While we’ll have to wait until the Winter Cup officially gets under way to see the true clash of all the Generation of Miracles players (as it seems all the schools are in the Winter Cup) its the introduction of a new unrelated character, that truly made the premier stand out. 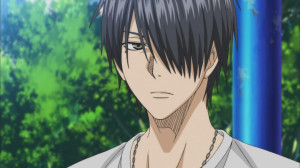 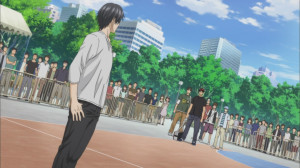 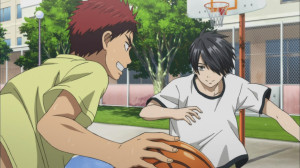 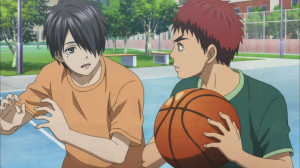 The focus this time, was on Kagami, as he ran into an old friend Himuro Tatsuya. It was interesting to find out about Kagami’s history with Himuro, and how Himuro was actually the one who got him into basketball. The introduction of Himuro adds a new layer of rivalry to the current battle between the various schools that the Generation of Miracles have now made their homes. Himuro is another rival for Kagami, and according to Kuroko, he’s on the same level as the Generation of Miracles as well. 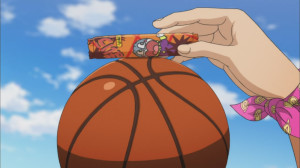 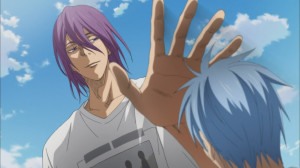 Of course, the big shocking moment that closed out the episode was the surprise introduction of Atsushi, the fourth Generation of Miracles member. A pretty exciting twist that made the cliffhanger all the more painful. The one other interesting element about Atsushi is that he’s the one man who bested Seirin’s founding member Kiyoshi Teppei. Seems like Kagami and Kuroko aren’t the only ones who have a score to settle with the Generation of Miracles. 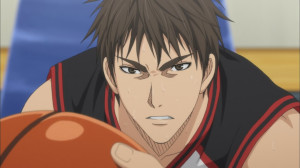 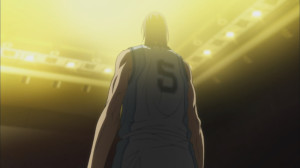 All in all, while there was no actual basketball in the premier beyond a few recap shots, the build up and story bits that we got seem to be moving things along at a pretty steady pace. I’m all for story over action when its need, and the premiere delivered the excitement that the last season promised with regards to both Kuroko and Kagami’s pasts.

And while the whole unique story aspect is one of Kuroko no Basuke’s great strengths, the fact that the show looks absolutely beautiful doesn’t hurt it one bit. Its rare for Production I.G to tackle sports shows (Prince of Tennis being one of the other few shows they’ve done), but man, when they do something, they go all out. The animation, character designs, art style, everything just sings. 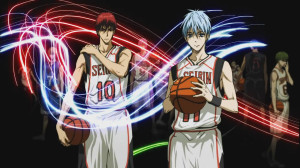 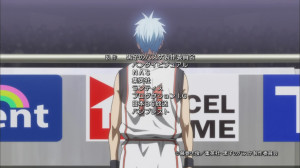 The OP/ED are pretty darn great as a result, with the animation alone stealing the show although the music for both is pretty impressive as well.

Kuroko no Basuke’s art direction, which has a kind of techno sports action feel to it, is really impressive as well. Bright neon lights, and the monochromatic color fades that the series has as a trademark style, are really impressive.

In many ways, this continuation of Kuroko no Basuke is everything fans will want, and almost makes the rather odd ending of the first season feel like a distant memory, Here’s to more Kuroko no Basuke!