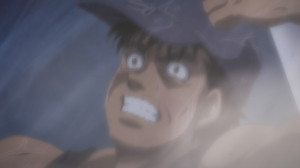 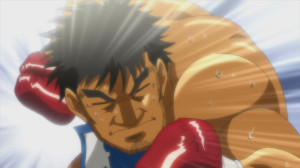 Its here! The long awaited return of Hajime no Ippo in anime form. There’s a wealth of manga source material to cover and a good 24 episode run to cover it, so why then.. did the first episode of Rising feel like more a highlights reel than anything else?

No one could be more excited about a third season of Ippo than myself. I only got into Hajime no Ippo a few years ago, and bulk watched the first series, the OVAs, and followed the second series as it was airing. Since then, not ever expecting a third season (everyone kind of seemed to forget about Ippo in the main stream anime industry), I also read through the manga and am pretty close to the current chapter. The transition from anime to manga was pretty seamless for me, mostly because Madhouse has done such an exceptional job with their Ippo adaptions. 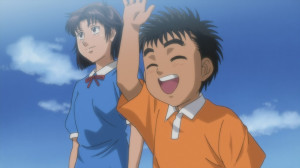 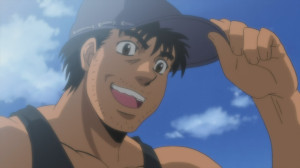 It is because of this, that I found Rising’s first episode to be a bit disappointing. The choice to start off with the story of Ippo’s childhood and dad was an interesting one, but one that the manga covered at a somewhat different time and place.. I wouldn’t have been that opposed to it, but the whole story felt really rushed and quickly adapted. This is particularly worrisome, as not only is this part of the story important to Ippo’s character development, but its really central to Ippo’s mother as well. In fact, it can very much be argued that its more of Ippo’s mother’s story, as she had the misfortune of losing the man she cared for and then having to both move and raise Ippo. 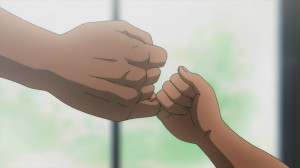 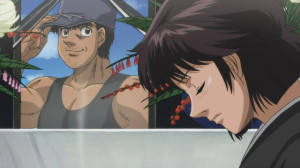 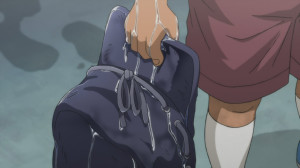 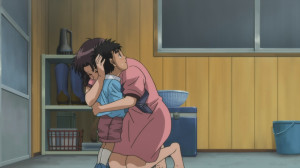 I hope that anime only watchers got more than the gist of it. Ippo’s father dies very much a hero, and Ippo’s image of his father as a strong man who never breaks his promises is central to his character. The impact was sorely lost, but I am glad that it wasn’t cut out entirely.

On that note, the whole episode, in fact, seemed to be in too much of a rush. Yes, there’s a lot of stuff to go through, and given the stuff we saw in the OP, its almost a bit too much.

The current fight, while definitely not one of the source material’s most exciting, is one of the most pivotal, especially in terms of where the story is going to go from here. Leaving that aside, the thing that I loved about Hajime no Ippo, is how long the fights can be, and how in many ways, you really do feel like you’re there, watching a rigorous battle of wills in each boxing match. 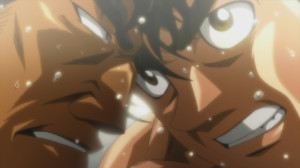 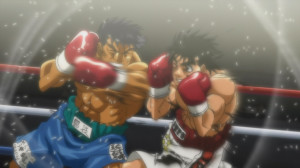 And really, this battle in particular, has some really trying psychological and physical trials for Ippo. None of that gets communicated in this episode, which tries to do the double duty of not only throwing in one of Ippo’s core backstory elements, but also breezes through what is an intense match up. The pre-match tension that is often found whenever Ippo is about to face someone of significance, is more or less cut out. Added to that, the actual match felt like a recap episode or a summary episode rather than an actual properly adapted part of the story. 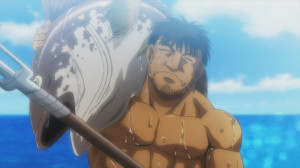 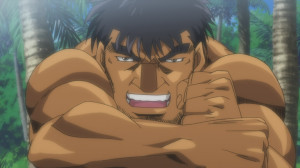 The battle is an interesting one, which is what truly makes it a tragedy. Not only has Ippo’s new opponent Shimabukuro claimed that he’ll destroy the Dempsy Roll (Ippo’s finishing move as it were XD) but he’s also shorter than Ippo. There’s also the interesting fact that he, like Ippo’s father is a fisherman.

And now I know what you’re thinking: “Oh it makes sense! That’s why Ippo’s dad’s story was revealed here, context!”. Yes context is definitely great, but simply throwing in what is a very emotional and important part of Ippo’s past to provide context is really doing a disservice to the character and the story in my opinion. Plus, given that this part was adapted, some personal stuff for Ippo’s present life is most definitely going to be cut out (probably). I sincearily hope that isn’t the case, as the slice of life moments to Hajime no Ippo are as vital as the boxing aspect of the franchise. 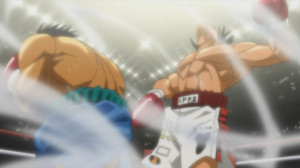 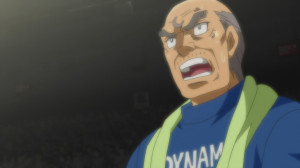 With Shimabukuro’s rather interesting similarity to Ippo both in terms of height and in terms of the sear, there’s some very interesting ramifications in this match, where Ippo largely plays it safe until the end of the episode. 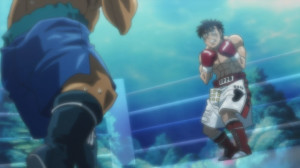 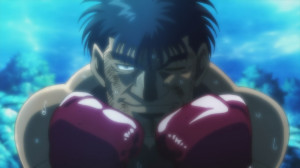 The reveal of Ippo’s Cyanosis is pretty underwhelming, and acts as a very cheap cliffhanger rather than a twist that would’ve worked way better mid episode, mid match in my opinion.  I guess Madhouse and director Shishido Jun (who also directed the impressive New Challenger series) want to hit the ground running.

While I certainly can’t fault them for trying to sail their way through the slightly less interesting stuff to get to the more meaty bits, I do worry that this need for speed is going to cost the story. It already kind of is actually, and I hope that this was just a misstep in the premier, rather than a continuing trend. There’s a problem with large parts of the source material are cut out, or sped through, but its worse when its very very evident as well.

While I have my severe issues with the pacing of this episode, nearly everything else about this show is still as it was during New Challenger. Sleek animation, faithful rendition of the manga, all the bells and whistles are all there. Madhouse is generally pretty darn good at adaptions, with Death Note and more recently Hunter x Hunter as fine examples of their pedigree as a studio. 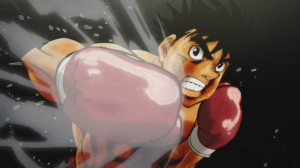 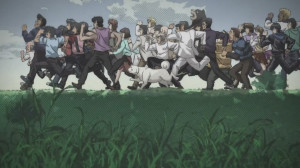 The OP/ED set this time, on the other hand, was just kind of okay. It’s definitely going for more of a retro feel than anything (I’m quite reminded of the original Ippo series by them), but they honestly don’t hold a candle to new Challenger’s OP/ED set, which were both absolutely fantastic. Not a deal breaker by any means, but I’ll quite miss wanting to watch and more importantly relish watching the OP and ED with each episode.

All in all, Hajime no Ippo’s back, but its off to a bit of a rough and speedy start. I’ll definitely be blogging this series, and I’ll keep an open mind. Shishido-san and Madhouse haven’t let me down before, so I’m hoping they continue their stellar work on this series as well. 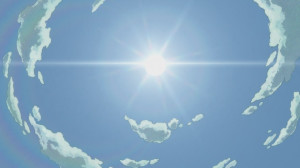 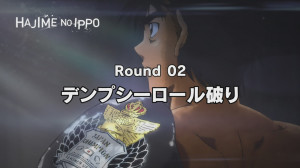 The title of the next episode is enough to get one excited eh? “The Dempsy Roll Broken”.

in Hajime no Ippo: Rising