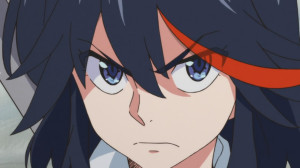 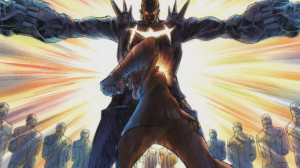 If there was ever a show that embodied the very notion of “Loud, extreme and over-the-top” its this season’s offering from relatively new studio Trigger. Kill la Kill is a series that is just… bat-shit crazy. Its so out there, so loud, so unapologetic and so “gaar” (for lack of a better term) that its just… intense!

As nearly everyone knows by now, Studio Trigger’s latest project, Kill la Kill reunites key staff from Gainax’s Tengen Toppa Gurren Lagann anime production, who have since left the company. So how is a new animation project from the people who brought us Gurren Lagann?

I really wish I had enough of a vocabulary to describe what I just saw 24 minutes of, because I’m still not entirely sure. Perhaps Kill la Kill is like, a massive dose of energy drink caffeine combined with crack, with a dose of lewdness to boot? Perhaps it is. The question though, is whether its good.

I think at the end of the day I really can attest to that and say that it is. The first episode, though extremely loud, very over the top and crazy, still managed to keep my attention and interest throughout. Its almost as if every show that the staff members of Trigger (former Gainax) has done before this has been more of a beta test, or a search to find the most ultimate version of gaar, over-dramatic crack they could produce. 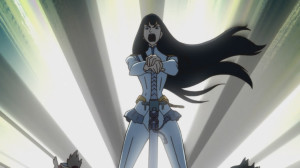 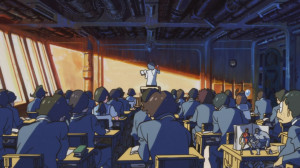 The premise for the show is definitely keeping in line with classic Gainax stuff. The story is set in a world where a giant school known as Honnouji Academy is ruled by a dictatorship-like student council. “Subjugation is liberation”, “Fear is Freedom” and “Contradiction is Truth” are the three phrases that are echoed by Student Council president and unopposed ruler Satsuki Kiryuin.

Of course this isn’t a school that is all bright, perfect and prestine. This is a dark, almost prison like place where the only classes taught are all about German facisim. Also certain “star” based uniforms give you magical powers… yep. Totally crazy, out there, over the top, and rarely making a lick of rational sense XD 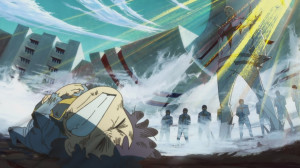 What’s interesting about Kill la Kill is how far out there it really is, and how little restraint it shows. In Gurren Lagann there were often quiet moments, places where you could breath for a second or two. Kill la Kill is like a roller coaster ride that just keeps on going farther and farther up the top, and then proceeds to drop down all the way till the end of the episode.

All of the characters talk exceedingly fast, without pausing, and spout out stuff constantly, almost to the point of being annoying. They’re annoying, and yet there’s a sort of annoying charm to these ultra over the top characters. Each of them definitely has a screw loose, and are some kind of extreme of a rather popular character archtype found in anime. 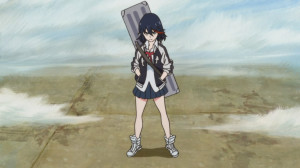 This in turn, makes series main protagonist, Ryuuko Matoi, who is calm, cool, collected and soft spoken feel like a breath of fresh air. In fact Ryuuko has her own gaar moments, but in many ways serves as a contrast to the entire show. While the entire show itself seems to be opperating on nitro fuel throughout, Ryuuko will take a breath, pause and then dive back into things. She’s a character that I’d like to say I’ve seen before, she definitely reminds me of Shikabane Hime’s Makina. She even has a rather tragic backstory of having lost a father to a killer, who’s very weapon she now holds, and who she is trying to track down. Ryuuko definitely feels more of an optimistic, cheerier character though, echoing my personal theory that Fall 2013 is the season of the likable protagonists.

In many ways the look and feel of the show, feels a lot like Gurren Lagann. I don’t simply mean in that in the art style though (which anyone who’s seen the show can instantly recognize) but in terms of both color pallete, the look and feel of the world and the general art direction. And of course, the characters look very much Sushio-san’s style from his character design work on Gurren Lagann. 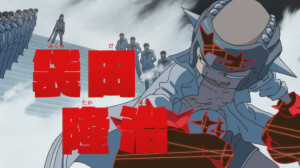 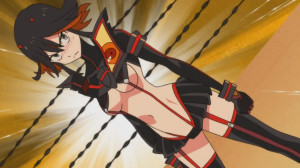 The point edges and drill like peices, the clean miliatary feel mixed with grunge, the outlandishly buff and gaar dudes and the rather risque outfit for the female lead make this a Sishio-san work through and through. And while normally I’d say: “This is totally exploitative”, I definitely don’t feel that way. The risque outfits, partial-nudity, add to the over the top, high octane feel that the show is going for, and achieves quite effectively. 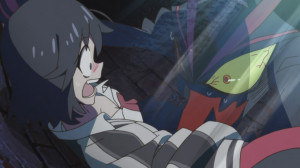 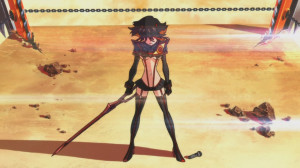 Also the fact that the most loud, over the top character in this very show is the frigging sailor uniform that Ryuuko ends up wearing is just hilarious! XD

The crux of the show is that its going to be a high school battle anime, filled with tons of over the top action sequences. If the first episode is any indication, this is a win-win situation. 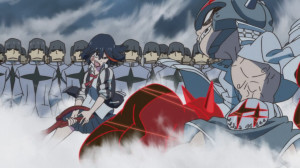 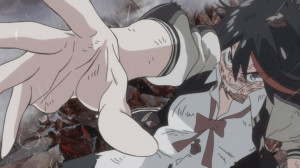 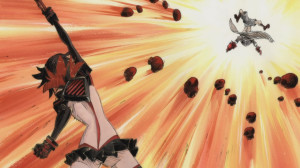 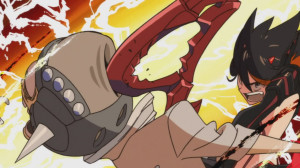 Everything from Ryuuko’s half scissor blade (quite ingenious actually) to the boxing match where she basically used said weapon to deliver boxing moves, to the intense amount of blood, gore and hurt that was dished out to her, everything just delivered in a very extreme way.

Honestly I’m surprised how much I liked this show. For all intents and purposes I shouldn’t. All the characters are loud, obnoxious and overly dramatic, the story isn’t that original, the world isn’t anything new either. Yet, the execution, the sheer brilliance of how well everything works as a whole, is just amazing. Only the people over at Studio Trigger can pull something like this off. Not a bad way at all to start making a name for yourself! 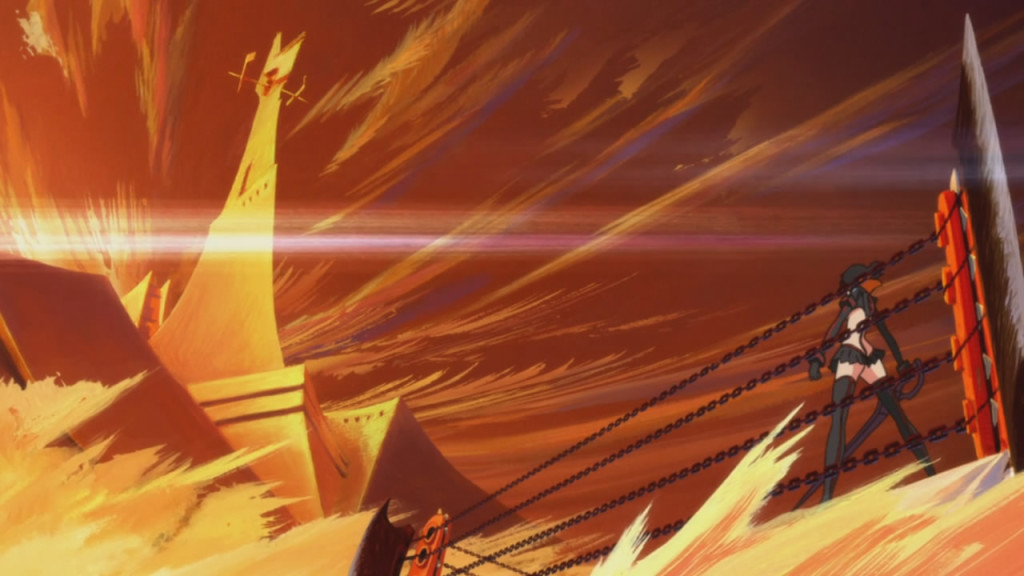 Kill la Kill is so intense, so totally out there, that I have no idea what to expect next week, or from the series as a whole. What I do know is that this series will continue to push every possible boundary it can, and will continue to entertain. Definitely something I intend to follow, if not blog. Man, Fall 2013 is only a few days in, and already its so darn GOOOD!