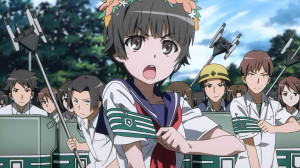 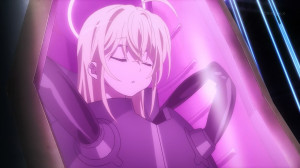 Well I’ll come out of the gate and say I didn’t hate the episode so anyone wanting to read about that will just have to find another venue for that kind of thing. They certainly went as over the top as they could and managed to top even the previous season for unbelievable spectacle. While it did do some crazy stuff it was really quite fun to watch. They managed to spread out the action pretty well and give a variety of characters some roles to play before it was over.

For a packed finale they sure managed to make use of a ton of vocal songs. Maybe too much at times, but they still worked into the scenes and is a reminder of how much we’ve seen through the two Railgun series. We had auto-mode Robots, very familiar piloted robots, ITEM, Saten and Uiharu piloting a Gundam, and Mikoto and Kuroko getting launched into the atmosphere….Yeah that all actually happened. We were certainly getting a lot of content for the final episode and probably a good thing they cut out the OP/ED to give themselves as much time. Well cut them out in the sense that the music was still playing but the story was actually continuing this time XD. 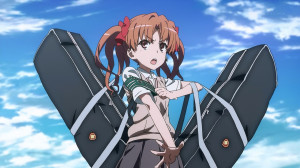 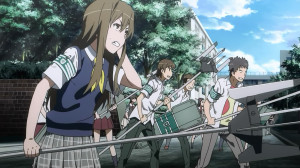 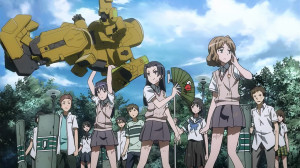 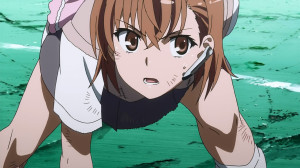 I just thought the episode was a lot of fun. The villains of this arc really were B-class villains so there wasn’t as big a need for things to get as dark and desperate as in the Sisters Arc. They weren’t facing the most powerful esper, but a bunch of geniuses who were pissed because they weren’t getting the attention they felt they deserved. Even their main threat was a bunch of robots running on a simplified program. The big problem was Febri’s health which they had cruelty designed to kill her if she wasn’t with them. Not to mention their biggest mistake was going around pissing everyone off from Mikoto to ITEM itself. It pretty much was a suicide run when you think about it.

The action itself was pretty good. I kind of wish that the various members of Judgment got to show off their abilities though. I mean maybe a lot of them are level 1 or 2 and don’t have abilities that would work well against these robots, but it did seem odd that no one except the cast members we are familiar with were using their abilities. Still at least they were doing something in helping to keep those robots distracted and remaining contained.

The characters who did get to show off did so with a lot of flare. Kuroko of course was on her game and taking care of everything in her area. Kongou and her friends were also doing a lot of damage and staying on top of things. Of course Mikoto got her chance to show off in just launching into that field of robots and doing plenty of damage along the way. Though even she has her limits when dealing with excessive numbers by herself and while protecting Febri at the same time. ITEM as well made one heck of an entrance just taking over annihilating the robots that remained after Mikoto’s run. Frankly they are better suited to that kind of thing anyways since they have numbers and pure destructive power with the Meltdowner on their side. 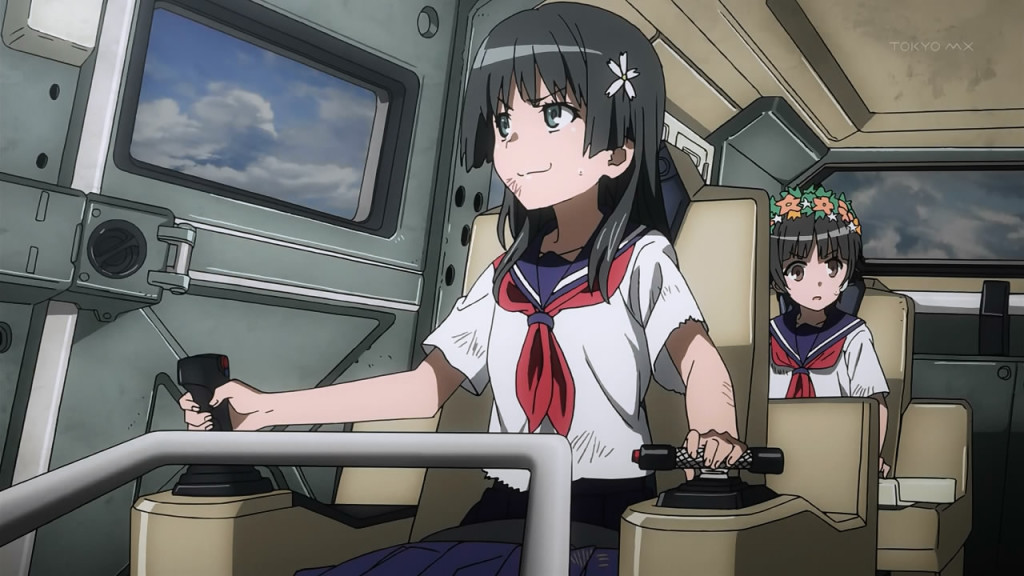 Her time has come!

Though maybe what will stand out the most at the end of the day was the mech action of Saten and Uiharu. You can just tell how much the staff loves Saten that they give her a mech to work with XD. While you can say that studying a manual isn’t good enough to know how to pilot something like that it’s better than just having it show up and having her guess at how to work it. Plus just frankly fun having someone like Saten beat the stuffing out of these guys. She’s really the team’s all-rounder kind of character. If you need something done that doesn’t require a flashy ability Saten can probably pull it off XD.

The episode had a lot of changing the tide moments. From the start when the Judgment members jumped out after letting the main characters have their moments in the spotlight, to when Kongou’s transforming robot arrived on the scene! Although the bad guys in this case never kept control of the situation for very long before everything turned back on them. They simply underestimated who they were dealing with and that cost them badly. Some of those appearances were bit cheesy in their timing, such as ITEM choosing to attack just when need, but hey coincidences happen and even more so when we’re talking about Academy City.

In terms of Mikoto’s continued character development I thought things continued smoothly. This whole plan relied on her leaning on others and asking for help when needed. It wasn’t something she could take on by herself or handle without a great deal of support. Even in the end having to ask help from someone she didn’t want to deal with just shows that she’ll reach out now if it’s needed. Maybe you don’t have to rely on others for everything, but sometimes you do and that’s the only way to clear a dangerous situation. 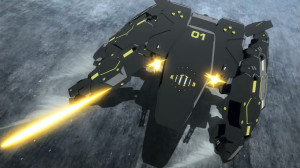 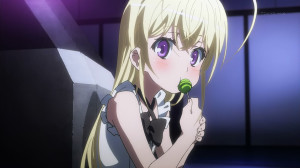 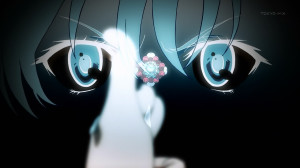 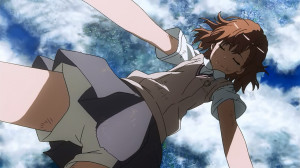 There was a lot of nice little moments in the episode. I liked the interaction between Febri and Shinobu, but also the Sisters and Shinobu. There’s a lot of pain and guilt burying Shinobu and having the people she helped create thank and appreciate her means a lot. Her efforts weren’t in vain and in the end she accomplished something. It was also good closure for the Sisters who have a connection with Shinobu that could have easily been left aside without this arc.

Now of course the finale in space was pretty out there and I think they could have afforded not having to do something so over the top. Though at least how they did it made some sort of sense. I mean the Sisters handle the calculations, Kongou sets up the launch, Mikoto snipes out the missile and Kuroko gets them down to the ground safely. Of course doing all this almost in the middle of space is going a bit too far. Still, that in itself isn’t enough to bring the episode down that far and really at least it was spectacular.
Score: A- 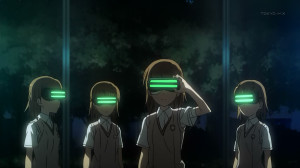 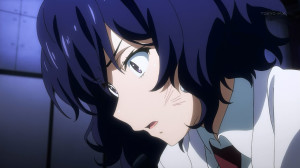 Still it’s a bit sad to see the show end. Whatever people thought of this arc they did a decent job with only around 7 episodes to get it done. Odds are with how the Railgun and Index series flip back and forth we’ll be waiting till about 2015 before we see Railgun 3.

My feelings remain the same though after the Sisters Arc ended. This season of Railgun most definitely blew the first season out of the water and remains one hell of an adaptation overall. Even this secondary arc managed to pull enough from the Sisters Arc to tie off a few loose ends such as with Shinobu and reflect Mikoto’s continued character growth. 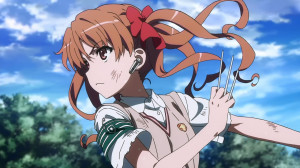 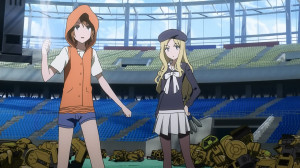 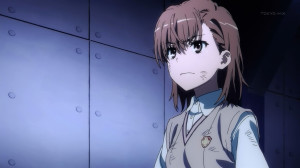 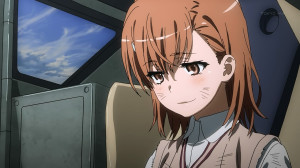 Overall Mikoto had an amazing journey through this season. Her world was flipped upside-down in the first half of the season with the revelation that in her attempt to help out people with her ability she gave corrupt scientists the tools they needed to create clones of her. Not to kid it’s pretty much the creation of a Mikoto clone army. Even more horrific than that revelation though (and learning there are tens of thousands of you is pretty shocking) was the fact that all these clones were being sacrificed to help Accelerator to reach Level 6. Treated like lab rats and expendable toys they were treated like they had no value and believed that themselves. It was only thanks to Mikoto and Touma that the Sisters found their place in the world and survived to experience it.

Mikoto reached her lowest moments near the end of the Sisters arc finally feeling like sacrificing herself and getting killed by Accelerator was the only option left. Touma’s impact in this arc was massive since he was one person that wouldn’t just leave Mikoto to her own devices and intervened. That gave her a chance to really grow and start moving back into a positive direction. Even at the end of this season she can’t just ignore that the darkness exists in Academy City, but at least she’s learning that it’s not something she should try to tackle herself. Things certainly aren’t always going to work out the way you want them to, but it doesn’t mean you have to get crushed by the darkness of that city. 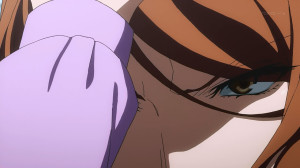 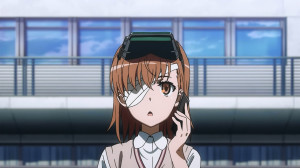 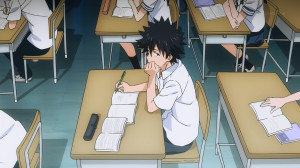 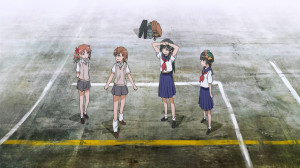 It really was one hell of a season for Railgun. The dark parts got pretty dark with the complete hopelessness of Mikoto’s situation, but the high points were just worth it. Accelerator getting beaten, Mikoto accepting the Sisters as family, etc. The later part of the series might not have reached that level, but it wasn’t a disaster. All I wanted was for the series to end with some entertaining moments and it did that.

I’m really going to miss Railgun when it’s all said and done. When the Sisters arc was in full swing that was some of the best anime out there. It’s going to be a while before we can return to this series, but I’ll be looking forward to it at any rate. Thanks for reading and I’ll try to get that Railgun S review up before the end of time XD.