For a series so obsessed with the idea of death and life, Kamisama no Inai Nichiyoubi (A Sunday without God) is a very beautiful and tranquil experience. Its power to really tug at the heart strings, and create a mood and atmosphere that few series have been able to do before it, make it one of the niche series that its fans will lament being glossed over this past Summer 2013. 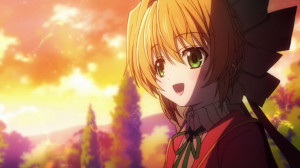 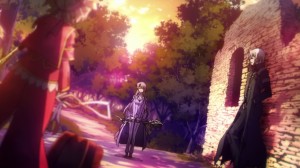 Kamisama no Inai Nichyoubi is a show featuring Ai Astin, the daughter of a human and a gravekeeper set in a rather twisted world where people are unable to die. The series puts forward a world devoid of death, and humans are more or less put into two groups of people, the undead and the living. Whats interesting is that this isn’t your run of the mill zombie show, far from it. In the world of Kamisama no Inai Nichyoubi people who are not of the living have feelings, emotions and thoughts just like a living person, albeit developing some sanity reducing after effects if not kept under constant care. The only way these undead can rest in peace is if they are buried by a Gravekeeper. The obvious fact is that few undead actually want to pass on and give up their existence.

This of course, has the series raise interesting questions about what it means to die, and what it means to live. In a world filled with ideas of what if, Kamisama no Inai Nichyoubi explores fascinating ideas not only of life and death, but of the realities of what happens when too many people get their unrealistic wishes fulfilled. 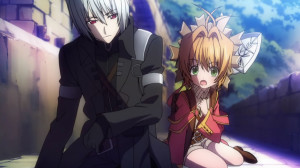 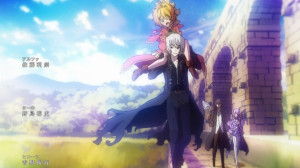 The series, adapted from a Light Novel series, is split into 5 story arcs, each wildly different from the other. The first and the last story arcs definitely stand out, if only because the featured characters in said arcs are just exceptional. Hampane Hampart, is a character that is introduced in the very first episode, and easily steals the show from the series protagonist Ai Astin. Of course, while characters like Hampnie Hambart (and later Alis) do populate the series, these supporting characters kind of outshine the main cast. Ai Astin, while a decent character in and of herself, can’t carry the show by herself, and there are story arcs that suffer from Ai not having a good partner to carry the weight of the story.

The result is a show that oscillates between “okay” and “Exceptionally amazing”. When Kamisama no Inai Nichiyoubi has the right characters, the story becomes just as endearing and amazing as the world that the series takes a lot of pain to build. 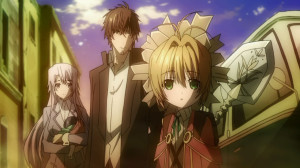 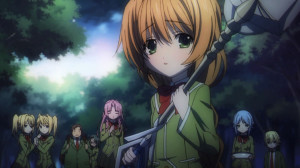 But while the story and world is a big part of the experience, what makes the series so special is the visual style and the soundtrack. The show features an endearing dreamy color pallete that I haven’t seen since Tegami Bachi. Of course unlike Tegami Bachi, which had a “lights on at night” feeling to it, Kamisama no Inai Nichiyoubi feels a lot more akin to the sunset. Quite fitting, as the series deals with the idea of a lack of finality in terms of its core concepts.

The character designs are of course, great and original. The background artwork, and the look of the world though, is what really brings you in, painting a picture of a world that has kind of near its end, but still continues to live. There’s an intersperse of overrun Greenery, apocalyptic wastelands and old European Town like landscapes that all really draw you in. Its to Madhouse’s credit that they do something that’s so breathtakingly endearing, and its in a different style to quite possibly anything that’s been seen from them. 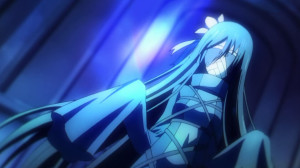 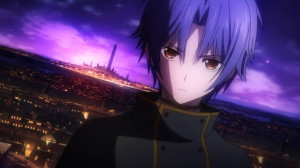 The Music, is fantastic. It gives a real sense of longing and finality, both in terms of the OP/ED but also the OST in general. Its a beautiful score that has some really melaconlic tones mixed with cheery and hopeful beats, making for a nice mix that really brings the feeling of the world that the series works hard to create.

And of course, Seiyuu work is top notch, with stellar performance for Ai Astin, Hampanie Hampart, Alis and Dee among many others. Daiksuke Namikawa in particular really steals the show with his performance of Hampanie, elevating him to near main character levels. 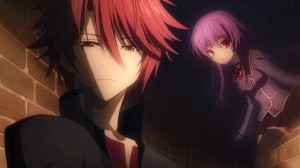 And while everything about Kamisama no Inai Nichyoubi is well done, perhaps the largest issue is that the series ends without really dealing with the larger issue of the story. The last arc, while definitely one of the series best, is only one of an ongoing light novel series. Anyone looking for closure, or a resolution will be sorely disappointed, as is often the case with light novel adaptions these days.

While there is a 13th episode to come, as a special extra of the final blu-ray volume, its doubtful that this series is going to resolve in an episode. 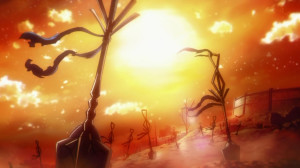 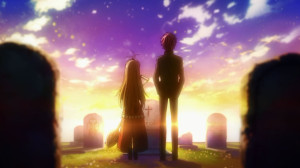 Thus, in the end, the series is another series that has a very endearing world, some really interesting characters, and looks, sounds and feels gorgeous. At the same time though, its hard to imagine a second season, and there are some parts where the series doesn’t fire on all cylinders. For the short time that you’re in the world of Kamisama no Inai Nichyoubi though, its hard to disagree with the fact that you’ll be sucked in, hooked and probably shed a tear or two by the end. It gets a heartfelt recommendation from us, even if it isn’t perfect. B+ Grade.