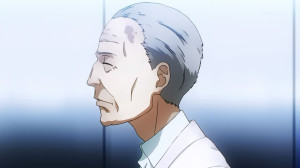 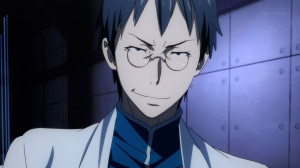 Everything is set up for the final episode and what should be a flashy series of battles. Not at all surprising since the OP pretty much set us up for this free for all of espers vs mechs. A fun situation in the sense that these robots are unmanned so there’s no reason for the cast to hold back in crushing them and ruining this stupid plan of STUDY. I mean really a bunch of geniuses calling their organization STUDY….they really can’t get any sadder can they?

The whole chat between Mikoto and Aritomi just seemed like a lot of whining. A bunch of geniuses felt like they were being ignored and so they went ahead and planned out a terrorist activity to prove that geniuses are important and espers can just be mass produced? Seems like a bunch of kids just saying “look at me, look at me!” Sure they technically are kids, but it just seems really weak. Too many comparisons you could make to this group. Like the smartest guy in your school whining because someone else has a skill he lacks. Aritomi is whining about naturally born espers having great abilities from birth, but it’s the same for geniuses. Many of them are naturally gifted. Espers learn how to use their abilities in flexible ways while geniuses just learn a lot of information. Fame is the only thing that’s different in this case and frankly complaining because you aren’t getting attention is pathetic. 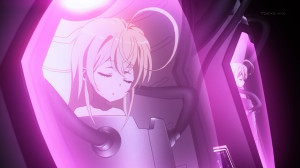 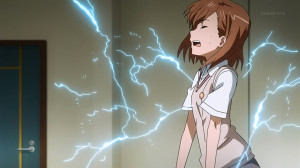 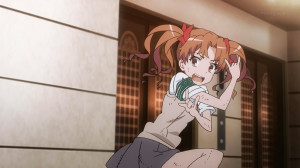 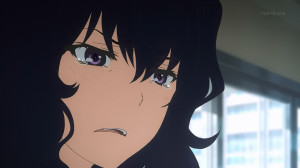 At least there won’t be any problem enjoying this group getting utterly crushed. There is no reason not to enjoy Mikoto and her friends just ruining this sad plan. Just shows remarkable lack of care on their part. Keeping Mikoto in a place lacking in security which made it easy to recover her. I mean sure there was some security and she was paralyzed, but leaving her alone with Shinobu just seemed really poorly thought out. Though that’s nothing new to this group. A nice rescue from Kuroko and company. My condolences to Kuroko but clearly Mikoto would rather suffer in turning herself into a human stun gun in order to move rather than waiting for rescue and being helpless before Kuroko XD.

That was a good conversation though between Mikoto and Shinobu. While the villains of this arc are lacking this has been a good arc to show Mikoto’s character development. She’s grown a lot since Railgun S started having gone through a dark phase before coming through it stronger and more matured. Maybe still naive in some respects, she at least isn’t foolish enough to think she can handle everything alone. She could also recognize what Shinobu was going through and how painful that could be. It’s not easy to just ask for help, but sometimes that’s the only way to make it. Something that Shinobu couldn’t really figure out earlier with the whole getting captured by ITEM and sold off. Hopefully when STUDY gets destroyed there will be a way for Shinobu to find her way back out into the light again.

We also finally got the full picture about Febri and Janie. The ability is fairly interesting being able to control objects like that though hardly the most terrifying ability ever created. Just a bit of a problem to deal with considering how many objects she can fill at once and the range of that power. Until Shinobu gets a chance to work with her the level of consciousness with Janie isn’t really anything to speak of. Right now she’s just being used as a weapon. 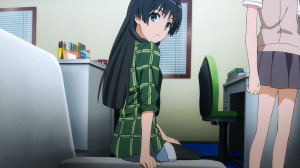 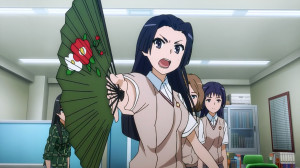 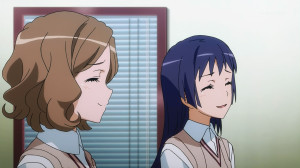 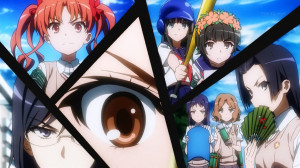 I liked the little meeting before the final battle with Mikoto and the others. Touma’s one line really is turning into something of a motto. While he isn’t going to play a role in this fight he certainly is around in spirit. Maybe it is a good saying to keep in mind even if it’s a bit silly to think of. Understandably Mikoto doesn’t want her friends to be in danger, but it’s the same both ways. No matter how powerful anyone is they don’t want to see each other getting hurt or carrying heavy burdens alone. The best thing is for everyone to share the burden as best they can and to hope everything will work out alright.

Thus we have everyone spread out to take on a “over 20,000” army! Not exactly chump change. It’s unlikely they are going to be monstrous, but that kind of number is going to be tough to handle especially with Mikoto taking Febri to go after Janie. Let’s face it her group doesn’t have a huge amount of high level espers and are going to be spread painfully thin here. Kuroko and Kongou should be able to handle themselves pretty well. Heck I’d probably send Kongou’s friends to support the others since a level 4 should be able to handle her job without much backup.

The really difficult role is being taken on by Uiharu and Saten. I mean they are good people, but even a small force is going to be too much. Saten going bat crazy and Uiharu controlling a few security robots is hardly going to be enough against full blown powered suits. Have to think they are going to need some support here. In the end all they need to do is hold the line long enough to reach Janie and have her stop controlling the robots. At that point the game is won and all the information needed about Febri’s medication can be beaten out of Aritomi. 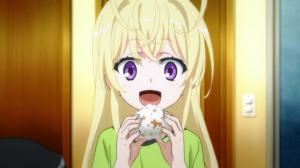 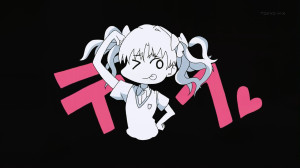 While this arc hasn’t been amazing I do like how they’ve tried to tie everything together. Seeing Mikoto’s continued growth is nice and the upcoming fight should be fairly entertaining.
Score: A