You Should Be Watching: Fate/kaleid liner Prisma☆Illya

Every season there is just a show that makes me regret not picking it up to blog on a regular basis. This time went with a show that really does deserve a second chance if people gave up on it too early. I wouldn’t be surprised if Fate/kaleid liner Prisma☆Illya is one of those shows.

It feels like a series that could fall into a couple initial traps. The first being people who really enjoyed Fate/Zero and get jarred by the idea of magical girls card capturing. While another might just not see it as a serious series. People could certainly fall into both categories pretty easily. I will say that this is a show that really deserves the 3-4 episode rule. The first episode is pretty light introducing Illya and just having her become this mahou shoujo. Some might also just complain about the loli fanservice that popped up in that episode as well. Ruby her magical stick is pretty much a comedic character. Having fun with mahou shoujo cliches and practically tricking Illya into becoming her master. But the series really does ramp up pretty effectively after the first few episodes. 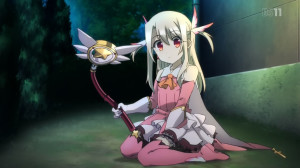 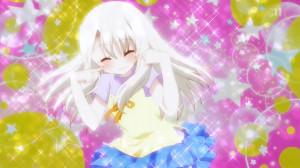 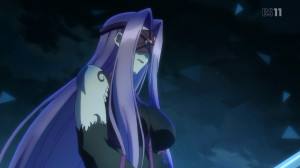 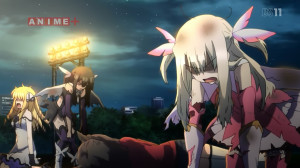 The setting could be seen as a pretty average setup for a magical girl series. In the variant of Card Captor or even Nanoha where some dangerous objects are scattered through a city and someone has to collect them before something terrible happens. Just in this case we’re talking about cards that take on the forms and abilities of the servants they represent. They are located in a mirror world so that the battles can be flashy as needed without actually destroying the city XD. Illya is selected/tricked by Ruby into becoming her master and now has to fight these servants and collect the cards to avoid disaster. The setup isn’t all that unusual. What they do though is poke a bit of fun at some magical girl cliches while also just bringing incredible action.

Looking past Illya’s pink outfit this is still a Fate series. The reason that Rin and Luvia initially were sent to this town was to capture these class cards. Ruby might be a comedic force, but along with Sapphire they are pretty powerful magical tools capable of doing the job. Powerful enough to give their masters a chance against these dark servants anyways. Anyone familiar with the Fate series in all their forms can imagine how powerful classes like Saber or Caster are and how difficult they’d be to take down. These fights aren’t just tame showdowns. There is danger and lives on the line as they try to defeat these servants so they will turn into cards and can be secured. Blood does get spilled in the series and at this point things have gotten pretty dangerous. 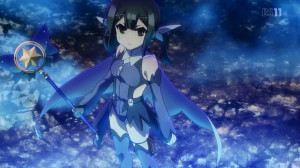 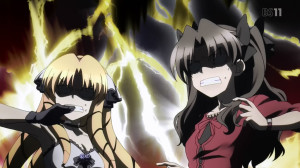 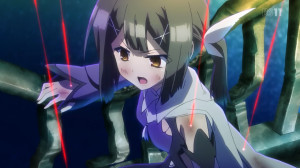 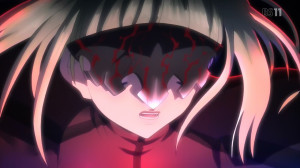 Honestly the action in this series is good enough that anyone remotely interested in it should check the series out. The last couple episodes especially were just outstanding and spoiling them would just take away from the impact. I will say these episodes have brought some of the best action I’ve seen this season and maybe all year. How Illya and Miyu (the other mahou shoujo) can use these cards is pretty interesting and there is some real mystery behind what’s going on. I never thought that mahou shoujos vs. servants would be extremely exciting but this series is delivering.

The characters are pretty solid if still being developed as we go. There is obviously more to Illya than just a cute student who gets dragged into events she never expected, but the series is still playing up some mysteries in regards to her. Overall though she’s someone who is interested in mahou shoujo’s and the possibility of becoming one did catch her interest. Miyu plays up the classic rival role pretty effectively, but there is again plenty of mystery as to why she’s involved in all this. Someone very serious and logical who you wouldn’t immediately look at and predict she’d become a mahou shoujo. Rin of course is similar to the Rin we’ve seen in other Fate series if only with slightly different visual style. She and Luvia really are pretty big rivals and it’s no surprise they lose their control over Ruby and Sapphire in a hurry. Far too focused on fighting each other than focusing on why they are there.

The music so far has been good. Again in the last couple episodes they’ve really hit a high mark which worked great when combined with the excellent visuals. They know it’s a Fate series and have no problem making use of certain tracks that just bring up certain scenes and fights to another level. 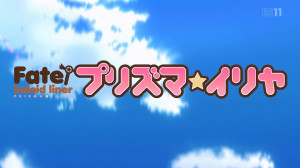 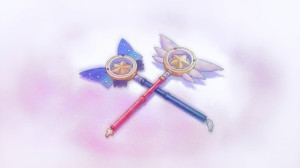 The OP for the series is pretty good. It manages to show the more normal side of Illya’s life along with the battles she’s getting dragged into. What I like is how it shows that the action is coming without really spoiling how those fights are going to go down. Has some nice visuals and the song is one I don’t mind listening to each week. It has an energetic song and I just like how it sounds. 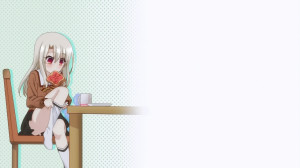 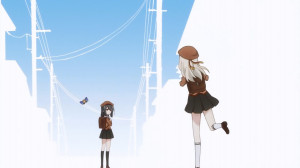 The ED is much more lighthearted focusing much more on the normal side of Illya’s life. It’s a peaceful enough song. Not that memorable, but nothing I’d really say that’s bad about it. Just a case where if you want to skip something to get to the next episode preview faster this might be it. 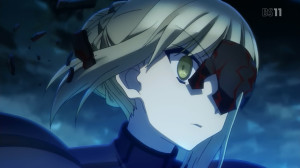 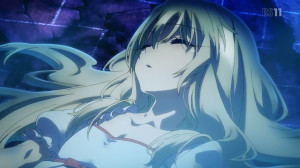 I really can’t say enough about how people need to give this show a chance if they gave up on it early. If you want to see some excellent action keep on watching and catch up to where the series is right now. If you are a fan of the Fate series give it a chance. It might not seem to be normal Fate material at first glance, but it definitely deserves to be connected to it. Illya is a cute main character that can make you smile. The show knows how to go for a laugh at times, but can also bring some amazing action when it’s time for it. Also it’s not a major time investment. The series is covering the first part of the manga and only will be 10 episodes. It’s going to be a quick ride, but it’s not going to be one of those series where you can feel them rushing to get to a good stopping point. I think this is a really good show and hope others will just give it 3 or 4 episodes to see what it can be. At the very least, anyone who wants to see some amazing action should watch 4-6 and just enjoy.