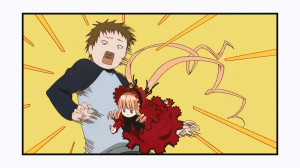 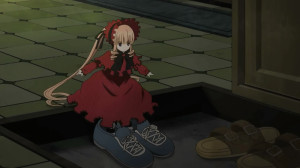 Certainly this series is taking its time and moving along at a fairly slow pace. It doesn’t really feel like they are trying to pad things out, but rather just take their time. There wasn’t a ton of drama in this episode, just showing the impact of Shinku coming into the life of this Jun. In that the episode did a good job being pretty entertaining.

A positive is that this Jun didn’t need too many chances before he figured out that it hurt less to dodge Shinku XD. Though had to be quite the shock for Shinku to go from Jun’s old home to this pretty small apartment. Of course makes sense for a guy who’s going to school and living on his own to not be staying in a huge place. Was pretty cute watching Shinku explore the place wandering into closets and stepping into his shoes XD. Really just a lot of cute moments in this episode as both of these two start to adapt to each other. This is a different Jun from the one that Shinku is used to and this is just a completely new situation for Jun who probably has been living alone for quite a while. 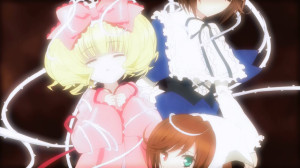 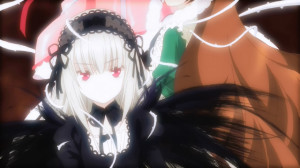 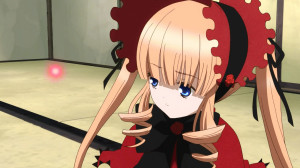 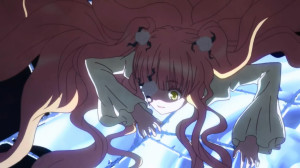 Of course it’s not all sunshine and rainbows. Was kind of sad to see how Shinku sat around in the dark until Jun got back. There’s quite a bit she can do, but reaching the lights was clearly a bit of a challenge. Also there is the real fact that her original body is trapped in an N-field right now same as Suingintou and Suiseiseki. That Kirakisho is one serious pain to deal with. However she’s doing it the girl is pretty effectively isolating the various Rozen Maidens. Not that she’s taken their cores yet, but it’s still a pretty serious problem. Serious enough that Shinku actually went to an alternate universe and is using a temporary body.

While the series is moving slowly it’s clear they have a firm time limit to consider. At most Shinku can stay like this for a week at most. I’m still not sure though what the plan was in doing this. Sure it gets Shinku out of that N-Field to a degree, but she’s now in another dimension and can’t really help the others out. Even if it was a desperation maneuver there has to be some kind of purpose behind doing all this. The downside is that Kirakisho knows all of this and is already spreading out her vines. Can see from the mirror that Jun is also caught up in them still and things are looking pretty dire. Maybe if they can get back into contact with the other Jun they might be able to find a way out of this mess, but I’m just not sure what’s going to happen. 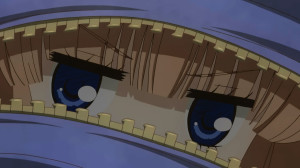 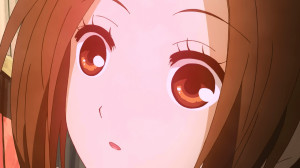 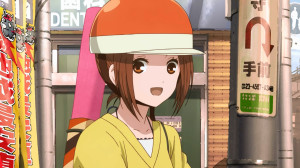 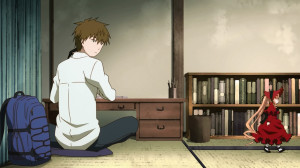 We are starting to see a bigger change in Jun’s temperment. From the moment he started putting Shinku together here he’s started to change and that seems to be continuing. He’s going back to classes and was just able to have some solid conversations with Shinku. I just hope he isn’t going to be thinking too much like he was at the start. You can’t change your past, just what you do in the future. He can’t change a lot of things, but Jun can move forward.

I still think the key to him moving forward will be Saitou. That girl continues to keep a constant presence in the series and really has helped Jun be the most animated we’ve seen him. That conversation about her costume really got him interested and involved. Had him laughing, talking, and actually giving some advice about what she should do for her costume. Certainly caught Shinku’s attention and really it’s not much of a tease to call her his girlfriend. At this rate it’s really only a matter of time. That is one thing he can consider a possibility that isn’t looking backwards at his past.

Can start to see a path for Jun going forward outside of this Rozen Maiden battle. He’s obviously still got a great mind for design and still has the skills to put things together. May need some time to sharpen those skills and improve, but he can make a career out of that path. It’s different from the days at his school, I’m sure he can find a place in the theatre designing costumes. There’s no escaping some people who make fun of others, but if he can face those risks I think Jun would be ok long term. Of course that’s a lot of speculation. Right now it was just one conversation. 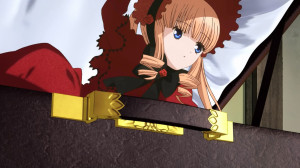 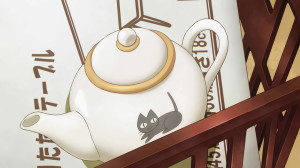 Things are looking up for Jun right now. His outlook is getting more positive and he’s got more people to interact with. Sadly he won’t be able to spend a long time with Shinku regardless, but it’s still a nice chance for him to grow. But the threat of Kirakisho is still hanging overhead so who knows when things might go to hell.
Score: B+