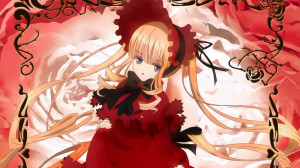 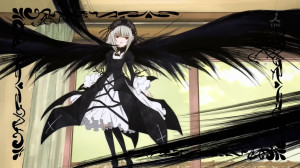 I thought long and hard about what series I really wanted to cover for this summer season. In the end after watching the first episode of this new Rozen Maiden I couldn’t let it pass me by. It’s not necessarily easy to find a lot of people who have seen the original Rozen Maiden anime or read the manga. The last appearance in anime form from this series came about 6 years ago. To say it’s a bit old would be an understatement. This whole time I had wondered just how they were going to approach this. Was it going to be a full blown remake from the beginning? Or a new season with some kind of recap to get people up to speed? In the end they took the later path. I’m not surprised of course. In this current time we just don’t get massively long series anymore. If they tried to reboot this in anime form then we might not even get to fresh material for quite some time. This current age of anime is about making small or safe bets.

Still, I think they did as good a job as could be expected with going the recap route. The first episode was pretty much entirely focused on getting people as much up to speed as possible. They focused on explaining just who these characters are, what the overall story is about, and how things are currently situated going into this new season. I can only imagine for some people it felt like the episode was going into overdrive from just about the very beginning. They had a lot to explain and not a whole lot of time to explain it in. Now whether this was enough for new people I don’t know. I haven’t watched the original series in a long time, but a lot of it left me nodding while some seems like it was more in tune with the manga. It’s kind of ironic since back when the original series was made a lot of filler was necessary to stretch it out. Now anime is all about short seasons so it can be in a sense more true to the material. Anyways, I think it did an alright job letting people know overall what is going on here. 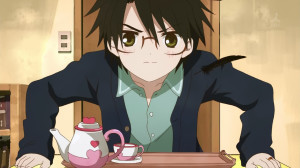 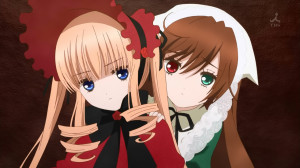 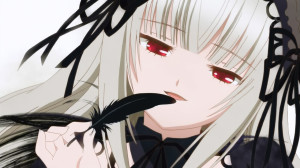 We can get some feeling for the main character Jun. Given that letter and the options to wind up or not to wind up. Of course referring to the delivery he gets pretty soon after. Jun made a choice there and that lead to things really taking off. Shinku arrived, he did wind her up and suddenly this doll literally comes to life. I have a feeling now that they’ve set things up the future episodes will fill in some of the blanks surrounding the characters. So far we don’t know a lot about Jun. Other than he got really upset when his parents were mentioned and he has a habit of checking out what’s under the skirts of dolls XD. Of course to be fair she wasn’t…well moving at the time, but somehow that doesn’t sound better.

For anyone who has seen the previous series, it’s nice to know the characters are the same as always. The voice actors returning to their roles after this much time is a relief. Shinku is as aristocratic as ever, Suigintou is as awesome as ever, and Suiseiseki is as Desu as ever XD. It’s just a comfort since those VA’s did such a great job originally. All the characters look great as well. I may not be a great judge of art, but I think the art in the first episode looked good. The dolls all looked great, especially Suigintou. Her wings really have a nice look to them and just feel more real than they were before. We’ll have to see how the backgrounds look going forward, but the characters themselves look good so far. 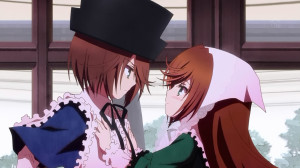 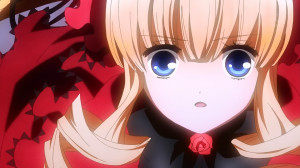 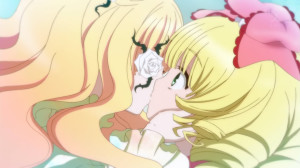 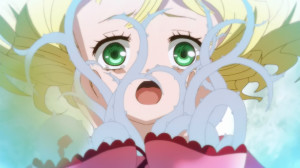 Now as to the story itself, it’s always good to reflect on what happened. As we saw Jun was given a choice and chose to wind up Shinku. After that Suigintou attacked leading to Jun kissing Shinku’s ring. As we could see these dolls make contracts with the humans that wind them up. Though sometimes as we saw with Souseiseki those humans aren’t great people. With all the dolls having awakened the Alice Games could begin. These dolls all vying for the special Rosa Mysticas they were given upon their creation. Whoever survives to the end gets to become Alice, though what that means is up in the air. Unfortunately Suigintou lead the twin dolls Suiseiseki and Souseiseki together and stole Souseiseki’s Rosa Mystica.

Though if anyone had a horrible first episode it was Hinaichigo. I mean damn….Obviously a bit of a crybaby, that doll had to deal with being alone often since Tomoe had to go to school and keep her existence a secret. Eventually she lost it, got pulled into that field, and well…damn. I can only imagine what it’d be like, getting your body devored from the inside. Will say that Kirakishou was creepy as hell. Never got to see her in the original anime, so that’s completely new to me.

But it all ends with Jun once again making a choice. I suppose after having chosen to wind Shinku up at the beginning there is no point to holding himself back now. Things will only change if someone takes action and that’s what he did here. Though I have no clue what’s going to happen.

OP [Watashi no Bara wo Haminasai] by ALI: (A) 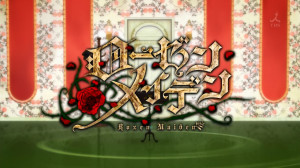 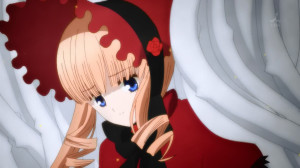 Now the OP was all about smacking people in the face with the nostalgia stick XD. Honestly it feels like a Rozen Maiden OP and I’m fine with that. Familiar music and the animation really was familiar. I just think the art style of the series is a nice one and stands out. It all flowed nicely. Clearly Kirakishou is going to be a key part of this series. Overall, it just looked good and it fit the series well. 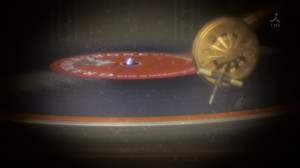 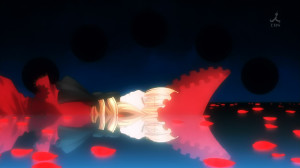 The ED was quite nice in its own way too. It was a soft kind of ED, but one that just left an impression behind. It was something watching the dolls be placed together in that shop window and watching people pass by. Then it shifted over to Shinku and a reflection of her in some water. The phases of the moon lighting up behind her makes me wonder about the passage of time for this series. A lot of things that might not make sense until we see more episdoes go by. 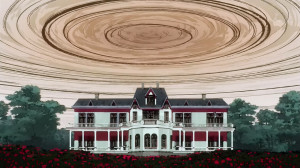 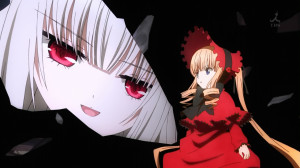 I guess the question is whether people who haven’t seen anything related to Rozen Maiden will enjoy checking this out. I think it’s worth giving it a 3 episode test run. The first episode is recap and the next ones should be calmer going forward. Though would I still recommend either tracking down the original manga or watching at least the original anime? Yeah, while they go off into their own direction at a certain point the anime was still fun. I’ll certainly be watching this series as it goes forward and I hope it turns out well. It’s not a series I’d expect to enjoy from the premise, but it really is something else.
Score: B