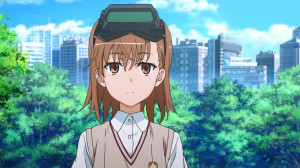 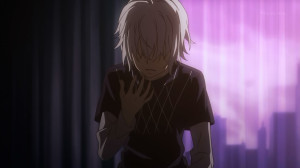 While compared to the previous episodes this wasn’t an action packed episode, this episode still was a really good one. It seemed likely that she couldn’t stop the experiments that easily and the agony of finding out the truth really broke Mikoto for a while. This episode has a feeling of moving on to the next chapter. Mikoto’s assault on the labs has passed and now Touma has returned to the series. This episode kind of hit all the key parties involved in this experiment. The clones, Mikoto, Accelerator, the scientists, and Touma. Just a feeling that things are really going to take off from here.

Honestly, this was a painful episode to watch because of what it did to Mikoto. This girl really is being put through an emotional hell right now. She’s physically and mentally exhausted and the hits just keep on coming. Just look at how far she’s come from the girl we saw in the first season. She’s coming to the realization that Academy City itself is her enemy. There’s no way experiments like these are being done without approval from the higher ups. While that might be logical, for someone like Mikoto who sees this place as her home it is a shocking revelation. 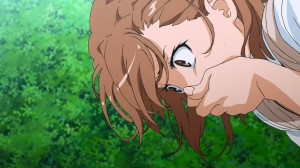 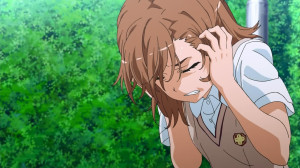 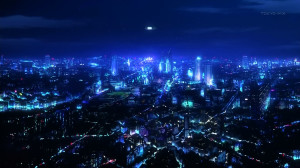 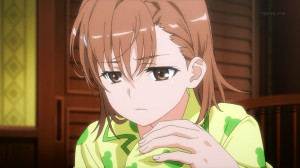 This arc has just been a whole series of betrayals for Mikoto. Her trust in the city, her trust in the scientists she gave her DNA map to, even her trust in laws. She can’t just report this and sit by. It’s being covered up too strongly and protected by the city itself. Powerful groups have to be supporting this Level 6 Shift project and won’t let it be broken down so easily. Both Judgment and Anti-Skill are controlled by the City itself. At best she could go international, but whether it’d be believed and how quickly it could be responded to is up in the air. This is something Mikoto has to tackle alone. Especially when she’s currently wracked with guilt. She literally blames all these deaths on herself. 10,000 clones are dead and she blames herself for each and every death. Emotionally she’s getting dragged through hell as shown by that flash of her being dragged down by the bloody clones.

The question Mikoto is troubled with is how far is she willing to go? These stealth attacks still allowed her to try and protect her identity and lifestyle. But she really can’t protect that and try to save the remaining MISAKAs. Of course it only troubles her more to have a wish like “having a normal life” when she blames herself for all those deaths. How can someone connected to so much death retain a normal life? I think by the end of this episode Mikoto had reached her conclusion about what she has to do. She’ll go as far as is needed to stop these experiments, even if it destroys her very lifestyle. 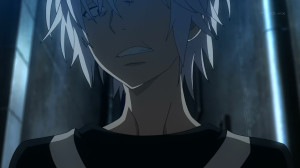 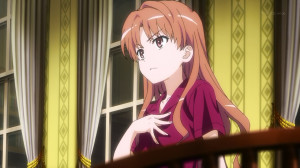 This also shows why Mikoto can’t turn to her friends for help. She can’t drag them into the darkness of Academy City. For someone like Kuroko who defends and believes in the system this truth would be devastating. For Kuroko the rules are of utmost importance and she has to uphold them. But if she knew the truth who knows what she might do. Mikoto can’t drag her or anyone else into a mess that she feels is her fault. She has to keep their minds and hands clean. But it just felt like she hoped that Kuroko would put her above it all. That she could share this burden. All she had at the end was this comfort that Kuroko at least would stand on the other side of the line and be the one who takes her in at the end.

We did get to see how Accelerator got wrapped up in all this. Started out not caring about going up a level since he’s already on top. But there was the promise of something more after reaching Level 6. Of reaching a point where he’s not just the strongest, he’s an absolute force. Seems like a person who is incredibly bored or dissatisfied with his life right now and the prospect of reaching something better is worth getting involved in this insanity. Also…it’s kind of creepy to suggest but I’m pretty sure he was chewing on human flesh there. If someone that shady turns cannibal we are all in trouble…Although might be another way how he’s trying to dehumanize these clones. They aren’t people, just lab animals that will play a small part in him reaching another level. 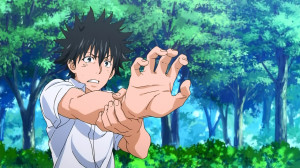 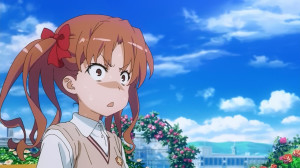 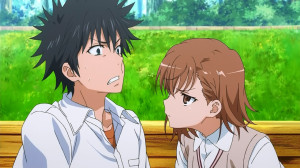 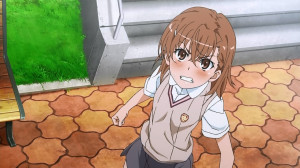 Frankly the only positive that came from this episode was Touma. For that brief moment while Mikoto didn’t know the truth she could have real fun. Of course Touma is certainly acting different from the last time we saw him in Railgun. He doesn’t know who Mikoto is and is wondering what kind of person he is. Even still, you could see just how much fun Mikoto had being with him. Grabbing all those drinks and chucking them at him. While she can’t beat this guy, he’s someone much easier to deal with as a person. It may be as Saten suggested, Mikoto is the type that’d rather be treated like a normal girl. Certainly with her powers being ineffective against him, that does make her rather normal when she is around him.

The interesting part of this episode was Touma meeting up with one the the MISAKA clones. Can lead to another player getting involved in these experiments and frankly Mikoto needs that more than anything else right now. But at the moment they were just brief scenes and will have to see how things evolve from here.

This episode did need some levity and we got that from Kuroko’s reactions. Her response to Touma and Mikoto interacting was hilarious. She really is one heck of a yuri stalker. Actually plotting on using Touma to steer Mikoto away from guys. Give her some moderately bad experiences that will pull her towards the female sex and straight to Kuroko XD. That girl always has her plans in action. Unfortunately the pleasant parts of this episode were brief and I have a feeling we won’t see a lot of it for a while now. 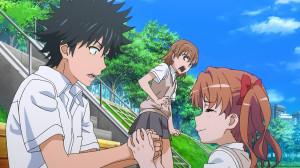 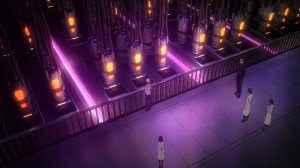 While this was mostly a building episode it was actually a good one. Mikoto’s character continues to develop throughout this arc. She’s growing as a person even though that growth is connected to painful revelations. Mikoto is hurting badly and blaming herself for more than she should. I’m curious to see what she’s going to do to try and bring these experiments to light and stop any more deaths.
Score: A