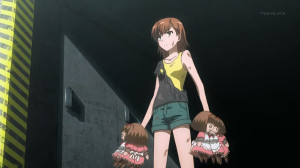 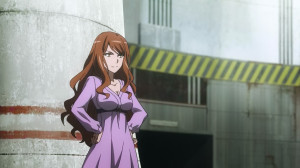 This really was an occasion where Mikoto just had to give everything she had in order to stay alive and accomplish her mission. This really was a case where she just had to use her head and try everything she could possibly think of. Even in that case Mugino made this close enough that some bad luck in a few cases could have lead to Mikoto’s death. Still, all things considered Mikoto did well in a difficult situation and managed to come out on top.

Not that this was anything close to easy. Mugino had a huge advantage in terms of stamina and combat training. In the end Mikoto is a student and hasn’t had that many chances to get real combat training. Of course can say without that experience she can be more flexible in her thinking. Still the fact that Mugino has had some training to help cover her weak points only made her more dangerous. 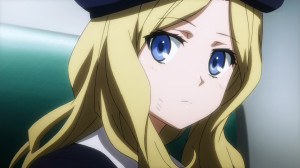 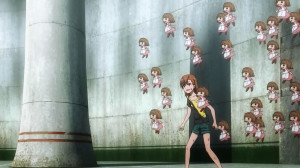 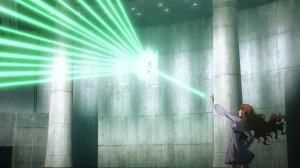 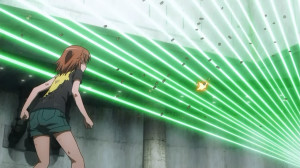 That was a pretty nice move Mikoto made using Frenda’s explosives. I can only imagine the trouble that girl will get into later…A lot of prep work required by Mikoto to fill the dolls with enough metal to be able to fly them around like that. It paid off though since it did force Mugino onto the defensive a few times and got a good clean hit in later. Of course if Mugino understood Mikoto she would have been far more worried about just using the dolls as physical weapons. Mikoto would rather not blow someone up. The whole attack was probably aiming for a chance to knock out Mugino with a shot to the head. Could certainly get a good concussion out of a shot like that.

Of course probably a serious mistake by Mikoto to just leave Mugino be and finish blowing up the facility. Exhaustion was probably playing a role here. Otherwise she might have tried to restrain her somehow. Either way that first round victory wasn’t as absolute as Mikoto might have wanted it to be. And damn Mugino came back with a vengeance there. Just beating the snot out of Mikoto in close combat and forcing her to retreat from the rapid fire attacks. That just wasn’t a fight she could win head on. Just too tired to fend off those kinds of blasts from someone who is just completely pissed off. 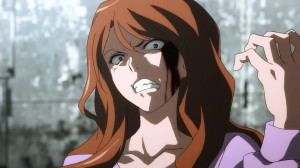 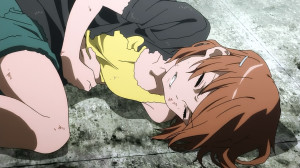 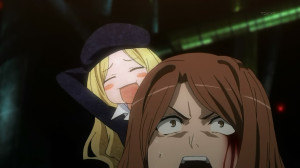 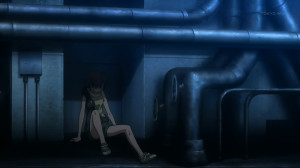 The struggle between these two was pretty entertaining to say the least. The first round with the floating bombs was almost comical, but things got more serious as the episode went on. Mikoto almost forced to throw up from that shot to the gut and dodging with everything she had against a pissed off Mugino. At the end she could barely handle blocking.

It was at that point when her plan fully kicked in. It was damn impressive how Mikoto took advantage of Frenda setting up explosive trails all over the place. She had a good plan to regain her footing, but Mugino’s ability wasn’t really suited to doing something like that. Even at the end she wasn’t even going to consider accepting Mikoto’s rescue there. Though I suppose that is because she had a way to cushion her fall somewhat. Did mess up her leg a bit, but at the same time she couldn’t actually end the fight.

Maybe what really cost Mugino was her obsession with rankings. She was really just completely absorbed in the whole Mikoto being ranked third and her fourth. That she had to beat the stuffing out of this girl to prove that she had been underestimated. I’m surprised Mikoto didn’t go off on her more about the whole ranking thing which really couldn’t matter less to Mikoto. 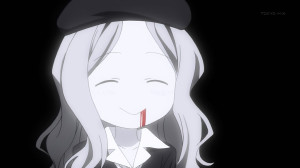 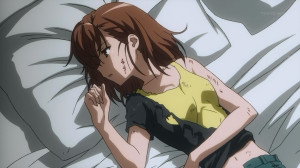 Of course even though she didn’t win the fight outright Mugino did seem interested in researching why Mikoto was so obsessed with destroying these facilites. Obviously it made sense to her that a student like Mikoto wouldn’t go insane about crushing these places if she didn’t have a very good reason for doing it. Certainly her analogy was on the ball. They pretty much are having Accelerator grind his way to Level 6 by crushing enemies that are unbelievably weak in comparison to him. If the reality wasn’t all those innocent clones being massacred I’d probably join her laughter about the whole idea.

And yeah I have to say the whole part where Mugino was getting updated on the situation was a good laugh in a tense situation. You can imagine that Frenda had a good idea of how much trouble she was in for not collecting her bombs before leaving. The way her expression just went completely white was worth a laugh XD. Though maybe the biggest laugh from this episode for me was Touma actually narrating the next episode preview.

While Mikoto is feeling a bit more relieved it doesn’t seem like this is over yet. I mean from what Mugino was looking at that wasn’t an expression of someone who thought it was all over. In fact if they were getting scared off I don’t think they’d call in ITEM to defend the facilities. Can’t imagine that it’d be much harder to operate this experiment with one less facility. With the amount they started off at you’d think there’d be a quicker response. I don’t know, just think Mikoto’s more reserved expression after this fight is suitable. She can probably feel that this isn’t over quite yet. 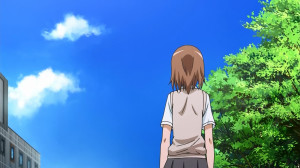 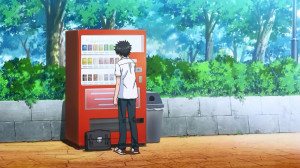 Regardless, she should have a good way to let loose with a familiar black haired youth crossing her path. Been a while since we’ve seen Touma in Railgun. Will be an interesting thing to see this encounter from Mikoto’s point of view. Starting to cross over now with Index’s view of the Sisters Arc. But this is Mikoto’s story so will have to see how things unfold from here.
Score: A+