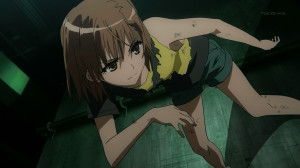 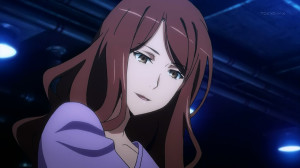 Well as expected this was a pretty tough situation for Mikoto. The fight against Frenda didn’t help, but she was already exhausted from crushing all those facilities. And with all her luck we find out she’s up against the 4th strongest Level 5. Certainly does seem to live up to the title Meltdowner. Those beams are pretty damn dangerous and have left Mikoto dancing around trying to just stay alive. This fight will continue on for a while longer and we’ll just have to see how it will turn out.

While Mikoto does have the ranking advantage being the 3rd strongest, we have no idea how slim that lead is. The simple issue of Mikoto’s stamina could tip the scale heavily in her opponent’s favor. We saw how large a gap can bet between Mikoto and Accelerator. This time the fight doesn’t seem to be too bad, but it’s not looking promising either. It seems both sides can deflect the other’s ability to some degree. Which isn’t great since it could bring this down into a battle of stamina which Mikoto can’t really hope to win. 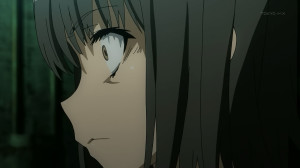 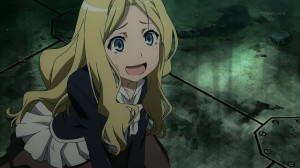 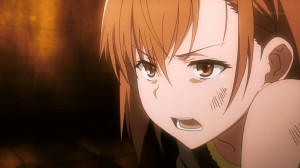 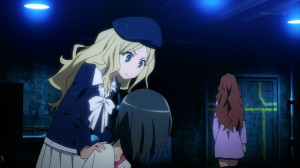 This episode did show how helpful it can be to have people on your side. The combination between Frenda’s explosives, Takitsubo’s AIM Stalking, and Meltdowner’s beams was pretty devastating. Mikoto could even things out slightly by being able to sense the attacks coming, but she didn’t have a lot of time to react. It was a real question of whether Takitsubo was going to collapse before Mikoto, though with Mikoto’s stubbornness I think she probably would have outlasted her. A kind of scary group actually using some sort of drug to overload Takitsubo’s ability to make her able to track someone that precisely. It really was just a one-sided assault though. Mikoto was doing alright when she was able to fight back, but retreating ended up being a grave mistake. All she could do then was dodge around. Being able to stick to walls and the ceiling thanks to her ability does give her more flexibility, but getting shot at constantly isn’t easy either.

It would seem that the reason that Frenda and Takitsubo were sent away was because Mugino wanted to settle this one on one. I suppose if you are fighting someone so very close to your level pride comes into play a bit. If she can’t beat an exhausted Railgun alone then it might make Mugino feel her place belong her even more strongly. Of course it’s still nowhere near a fair fight since Mikoto is barely hanging in there. This is going to be an all or nothing showdown. She has to win and then take care of this facility. After that she can make it back to the dorms and pass out for a while. 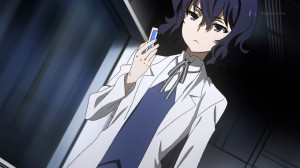 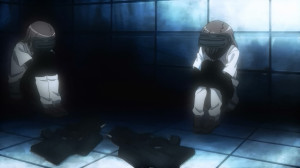 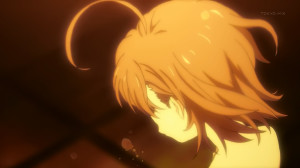 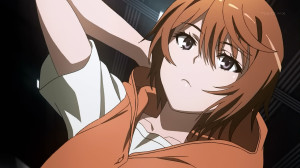 Of course the other side of this was with Shinobu making her move against the other facility. I could see what her plan was and it wasn’t a terrible one. Making an attempt to influence the sister’s emotions had a chance of impacting this experiment. Of course hoping that there’d be sympathy from Accelerator might be hoping for a bit much. At the very least it could have resulted in more people waking up and trying to stop this. Unfortunately it didn’t quite work out so well. Seems like they had an option built in that would prevent an outside hacking or program from infecting the sisters through the Misaka network. Really sucks when you go that far and it doesn’t pay off.

Didn’t help that she was up against a decently powerful esper. I’m not sure what kind of ability blocked that shot. Though seemed to be in a similar style to Accelerator. The same sound heard when his ability deflected something came through here. Though obviously this girl isn’t even close to Accelerator. That Offense Armor was pretty solid, not going to pierce that with a normal firearm. I will say that girl was a bit annoying though. Too obsessed with throwing super in front of everything and kind of killed her impact. Still, can see she’s someone that’s pretty focused on her job. At least understands that there are some things she best not look into. 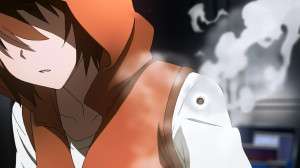 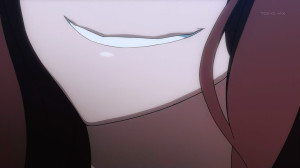 Regardless a pretty good episode. Had some good action with Mikoto jumping around and the stakes are pretty high with Shinobu having been captured. Going to be a full out showdown between the 3rd and 4th ranked Level 5s. It’s a bit concerning that Shinobu doesn’t feel that destroying the facilities will stop the experiments. If Mikoto still sees these clones ready to die after all of that it could really break her mentally. But at this point, the most important thing is surviving the fight. If she can’t overcome Mugino it’s all over. Railgun vs. Meltdowner, it all comes down to this.
Score: A