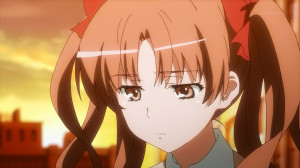 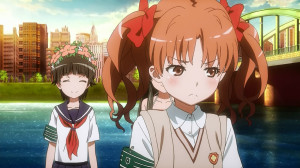 I didn’t think we’d see much of Kuroko and company past the point where things got serious, but the show managed to surprise me. It was not a bad plan to focus a bit on Kuroko and the impact that Mikoto’s secret crusade is having on her. She knows her friend is going through some kind of hell right now, but won’t actually turn to her and ask for help. Kuroko can’t really bring herself to ask what’s going on either. Probably because she knows that Mikoto would dodge the issue or respects her decision not to ask. Either way it’s a difficult position for Kuroko to be in. Can only watch as her friend takes brief breaks in between whatever she is doing.

Of course there is a good chance that Kuroko might find out sooner or later. Mikoto hiding her map like that in a toy that Kuroko often finds herself…snuggling. But for now it’s just a divide that is putting some stress on our teleporter. I can certainly understand the pain. You see your friend suffering and can do absolutely nothing about it. Though this episode was good for reminding Kuroko that she isn’t alone either. She’s not the only one worrying and doesn’t have to shoulder that herself. It’s the same message that can be given to Mikoto. At least it seemed to have a benefit for Kuroko by the end of the episode. She can’t fight this battle with Mikoto, but can at least remind her that she isn’t alone in the world. 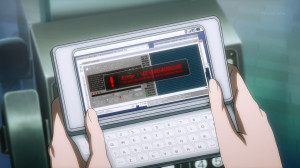 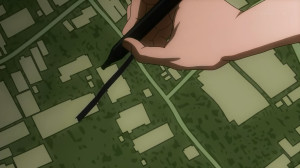 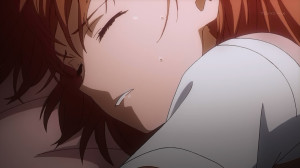 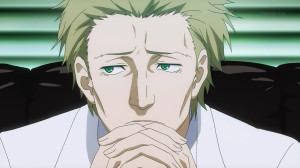 The episode was kind of sandwiched between more serious portions. At the start we could see Mikoto’s battle against this experiment getting started. She did a good job attacking the facilities via hacking and avoiding having to actually get too close to them. Too bad they were figured out since it would have made her job a lot easier XD. Mikoto is showing that while she can’t fight Accelerator head on, she certainly can use her ability in creative ways. Eventually she did have to go ahead though and start infiltrating the facilities personally. A slower job and more work, but it had to be done. She is pretty much invulnerable to electronic security and so they can’t really slow her down that way. Seems like she is knocking down the facilities in a hurry and is almost done.

Unfortunately she hasn’t managed to remain anonymous. They can’t ID her with certainty, but they have a good guess at who is behind this. Someone with motivation to stop this project and the ability to avoid their security. The impact on the windmills was also pretty important, for a few reasons. Mostly since it just helped confirm that Mikoto was behind these attacks. Though what they can do against a Level 5 is up in the air. Doubt they’d even try to make Accelerator do something like guard duty, but clearly the people running the show have some plan to deal with her. Just not a good combination since you can see Mikoto running herself ragged. 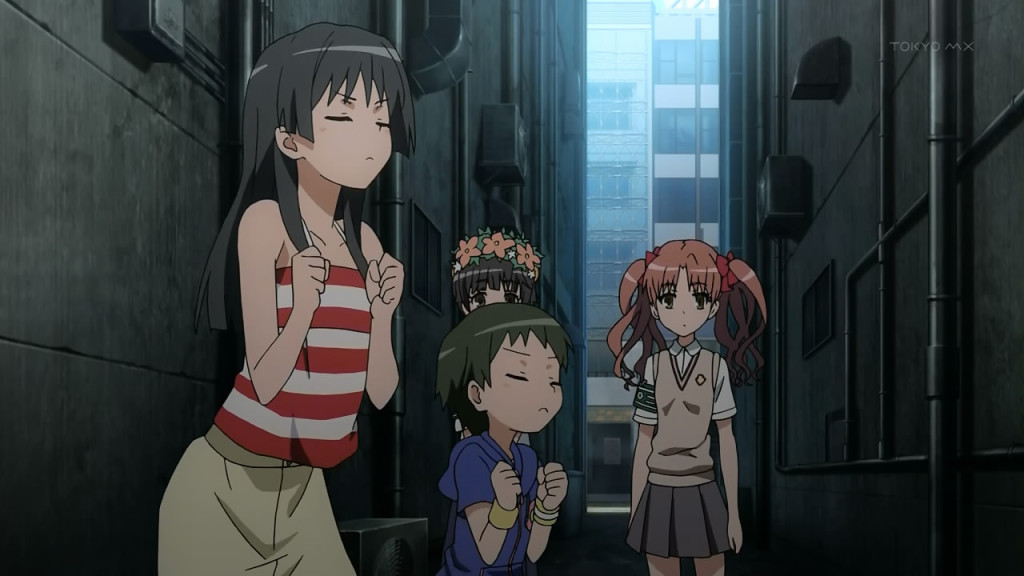 Yeah…what can be said about this?

While this episode didn’t focus on her too much, Mikoto obviously is pushing herself too hard. She is tortured by her connection to this experiment and considers that every break she takes may mean another clone’s life is being snuffed out. There is no time to break or rest since lives are on the line here. Can only hope that she’ll crush these last facilities in a hurry and just get a chance to breathe. I wish she wasn’t blaming herself so much, but sadly that isn’t going to happen. She’s a pretty pure character in how strongly she feels things. While she only had the best intentions she gave up her DNA map and these guys started their cruel experiments.

Otherwise the rest of the episode wasn’t that deep. Pretty light-hearted stuff like helping a kid find a card and then a four-leaf clover for a friend that is moving. It did give us some light comedy as Saten has managed to corrupt a young soul XD. I swear turning people into dogs might be Saten’s esper ability XD. It was some light fun, but nothing too interesting. Honestly I’d rather just watch 20 minutes of Mikoto blowing stuff up. Hopefully they don’t throw in too may light episodes since this is a rather serious situation. 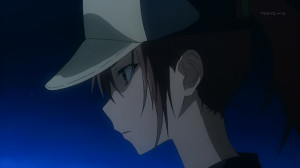 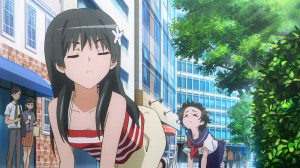 I’m looking forward to the next episode and seeing how Mikoto’s battle against this experiment goes. The facilities have fallen pretty easily so far, but it would seem like she’s in for some trouble. Considering the resources put into this experiment I can’t see the people in charge letting her stop them without a fight. Can only hope she’s up for what is coming next. Will also say I completely approve of Mikoto’s new attire XD. If this arc has been good for anything it’s getting her out of that uniform she’s always wearing. The ponytail works for her.
Score: B+