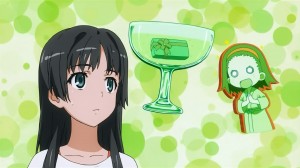 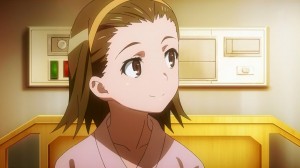 For a change of pace I’ll be taking on the second season of Railgun. Mostly because I really do enjoy this series and Index. It really is something when a character becomes so popular that they actually get their own spinoff. Not that I was surprised because Mikoto really was my favorite character in Index and I thought the first season of Railgun was a success. So, was an easy decision to pick this up and should be a fun series to cover.

Anyways the first episode was similar enough to the previous season in re-introducing us to the main characters, their relationships, and the crazy abilities some of these girls have. Of course Mikoto is fun as ever with her blowing away thugs, but also being rather comical. Always with her frog cell phone and surprisingly upset about not being able to make a big surprise for Banri. 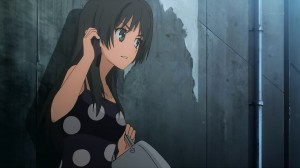 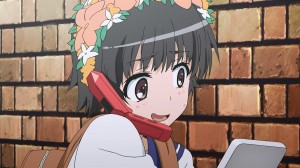 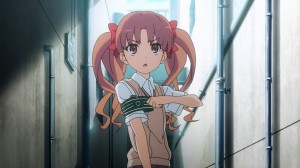 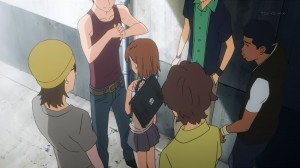 There isn’t too much to say about an intro episode, but all the characters are still pretty entertaining. Saten is still getting herself into trouble, but luckily managed to get right back out of it. I suppose when you have two friends in Judgment and a Level 5 as friends you can afford to get into trouble now and then. Though, I would agree with Uiharu that Saten should probably avoid going through dark alleys. Normal thugs are a joke when you have powerful friends backing you up, but things can go bad rather quickly if you don’t have time to make a call. Oddly I thought that was the most serious part of the episode. A bunch of thugs chasing down a helpless girl is a pretty serious thing.

But anyways, the rest of the cast seemed fine. Kuroko is still completely yuri for Mikoto although it will never work out. At least Mikoto knows to throw her a bone now and then. They are friends so no reason not to say thanks every now and then. Some nice teamwork with some rapid teleporting done by Kuroko to get Mikoto in position for an aerial attack. 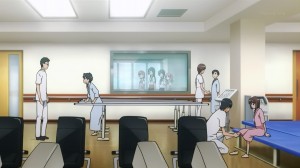 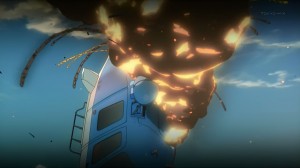 Although that was a pretty reckless maneuver by Mikoto. She took a serious risk of getting hit by shrapnel just to make a cool finishing strike. But I suppose that electrical field around her might help deflect most metals flying in her direction. She had fun with it so I suppose it’s alright. You knew with the first episode she had to use her Railgun to attack something so this was a pretty decent way to try and top the first season. Shooting a helicopter while upside-down is superior to shooting an oncoming car to be sure.

Nice to see that the kids rescued at the end of season 1 are doing alright. Unfortunately being stuck in that state for so long did mean a lot of rehab. Despite the kind of city this is, you still have to recover the old fashioned way sometimes. 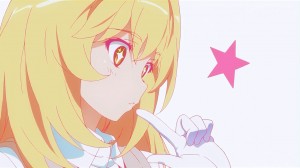 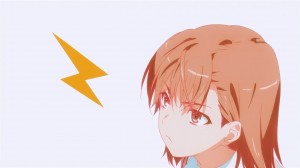 Maybe the most interesting bit of plot shown off here was that showdown between Mikoto and the ‘Mental Out’ Shokuhou Misaki. Definitely a scary ability in its own way. I mean the power to actually take control of people surrounding you is pretty unsettling. Guess she isn’t the most powerful in the psychic class of espers for a reason. Obviously not the most powerful esper outright, but you figure with that ability in the right situation she could be close. Mikoto luckily has that electrical field surrounding her body so she won’t be controlled easily, but Shokuhou showed how scary she could be there. That many bodies in the way would make it tough to attack her specifically. Especially considering the problem of having to hurt people who are being controlled and have no idea what is going on.

Some pretty quick action scenes in this one. Mikoto just taking out some thugs wasn’t too flashy, except for the part where she actually held down a helicopter. Goes to show there is more to her power than simply firing off coins. 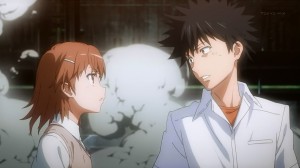 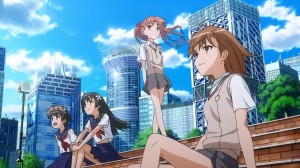 The OP was pretty good. It definitely feels like an OP you’d have with this second season. The title “Sister’s Noise” is certainly fitting as well. It had plenty of energy to it which is suitable I think for an OP. The visuals certainly do lay out what kind of show we’re in for here. If you know what’s coming it should be pretty exciting, but might be a bit spoilerish for those who don’t. It does at the very least tell us that we’re in for a lot of action in this second season. It does have me excited for the rest of the series so I’ll give it points there. 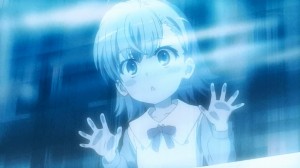 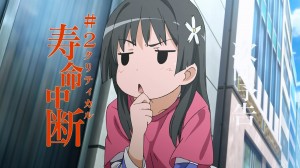 Overall, a good first episode back for Railgun. This season got off on the right foot and now just a question of what happens next. Not too much was set up in this episode beside the encounter between two level 5s and hinting at possible issues with hospitals for Mikoto. Will have to keep an eye on that.
Score: A-