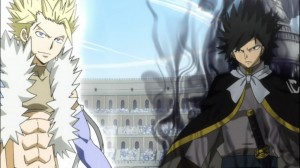 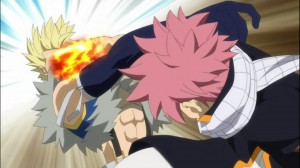 So we’re finally here huh? The second last episode of the Fairy Tail anime series? Wow. I’ll say that its been a ride, and I’ve loved writing about Fairy Tail for as long as I have. I think my only regret is not writing about the series for its last month. Being a person who’s in his senior year of college, I’ve been on crunch this semester as I finish my senior project. I’ve kind of went away from all my life’s other obligations in an effort to buckle down and get stuff done.

I assumed, I thought that I’d just catch up once things settled down and I was done with my own project and really most of what I need to do in college before I graduate. I planned to get back into reviewing Fairy Tail this very week, and then, of course, the big news happened. 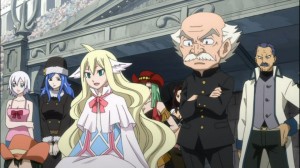 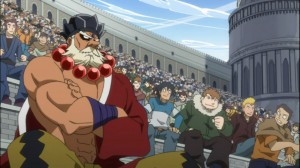 Fairy Tail won’t be continuing past episode 175. It will end this month, one week from now. Its a hard pill to swallow really. I got really big into blogging with both Durarara!! and Fairy Tail. With Fairy Tail, it really was never hard to find stuff to write about. When I’ve written about other series, I’ll always encounter periods when I just don’t know what to say, but Fairy Tail… It’s definitely something special.

Its ironic that I blasted the series a few episodes back for the whole thing with Yukino and Sabertooth, and right after that, we literally see the end of the series.

What I think is the most difficult for fans like myself to swallow, is where the series is ending. This isn’t an organic ending of the series, its ending mid-arc, right in the middle of one of the most exciting and interesting arcs Fairy Tail has done yet. The real tragedy is that the series is finally showing signs of living up to its potential.

Characters like Laxus, Wendy, Lucy, Natsu have all come so far. We’ve even got some focus on the romance in the series, both in terms of Erza and Gray. There’s been great character moments as Erza took on a hundred monsters, laxus decimated the entirety of Raven Tail and Natsu pretty much picked a fight with the entire Sabertooth guild.

We also have a huge plot brewing for Lucy and the Captain of the Gaurd. There’s even the whole concept of the Festival of the Dragon King… And it looks pretty darn difficult for them to wrap up all the threads of the arc in the next episode.

So the ending of the series is not really an ending, its a cancellation, pure and simple. Was it because the series just isn’t as popular? Did the movie just sell enough tickets? Did the anime simply catch up with the manga too much? I’m not sure. I’m just sad to see the series go, I really am.

With that in mind, its hard not to have this news impact my impressions of this episode. I’ll say this though, Fairy Tail is really giving us an epic battle as it closes out. Despite the sense of dread regarding the end of the series, this episode was one of the most entertaining episodes in the series.

The back and forth between The two duos of Dragon Slayers was just… amazing. 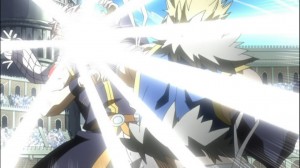 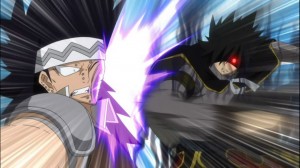 The first part of the battle had Natsu and Gajeel dominate over Sting and Rogue. The second part, which started off the episode had Sting and Rogue turn the tables with their Dragon Slayer magic. Both got faster, and used their teamwork to get the upperhand. 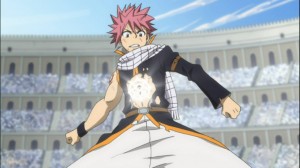 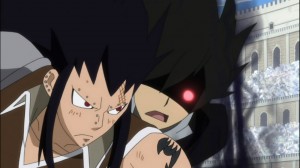 Natsu paralyzed by Sting’s Magic circle and Gajeel could barely keep up with Rogue at first. That quickly changed, however, and soon enough, we had the most awesome come back from both Gajeel and Natsu. It didn’t matter that Natsu and Gajeel’s magic was simple, their battle experience more than made up for it. As Fairy Tail began to turn the tide of the battle in their favor, Sting decided to go all out on a big attack: 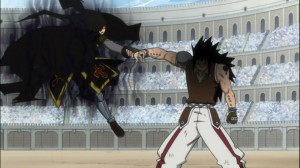 Maaaaaaan! Never has Natsu been as badass as when he blocked Sting’s major attack, with… ONE HAND! Not only that but Gajeel was able to easily counter Rogue’s shadow attacks as well. For a while, once again, it seemed like Fairy Tail was on top.

Of course, like any good, close battle, things changed quickly, and mostly because of Sting’s “promise” to Lector. 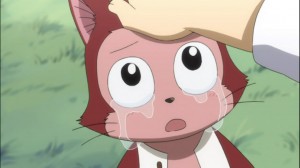 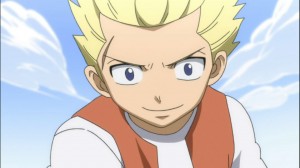 Now I have to comment, I wasn’t all too impressed with the whole backstory behind Sting’s obsession of defeating Natsu. The whole thing felt a bit under developed. Given the truly tragic back stories we’ve seen from this series, I wasn’t too enthralled or sympathetic to Sting’s whole childhood. 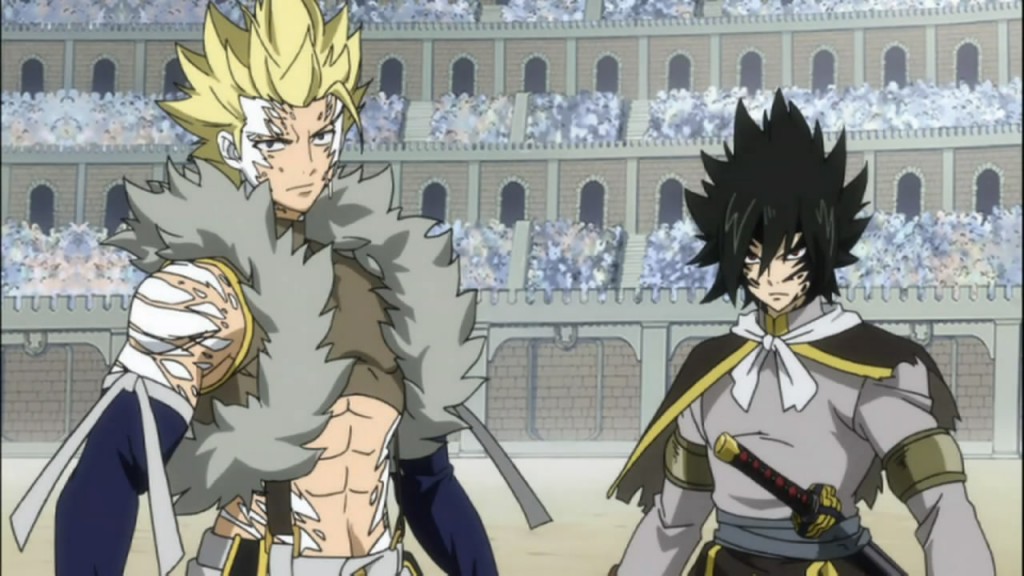 It was impressive that both Sting and Rogue could use Dragon Force at will though. As both Erza and Jellal recounted, Natsu had only been able to tap into that power under very special circumstances. 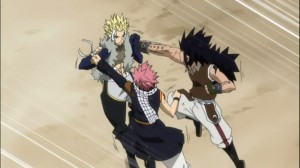 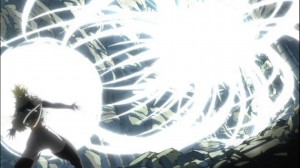 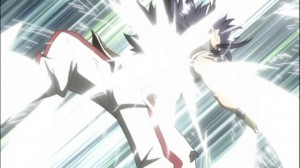 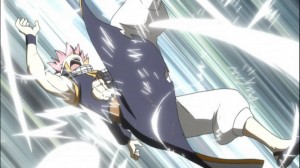 What followed was pretty obvious except for the fact that Sting himself was able to take on and flatten both Natsu and Gajeel by himself. 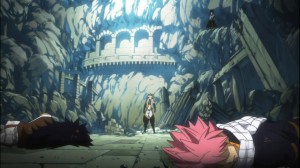 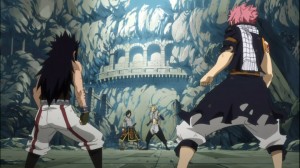 Now, at this point, I’ll admit to not even remotely thinking that Natsu or Gajeel would stay down. What did surprise me, however, was how this episode ended.

Natsu’s one of the cockiest, brash and aggressive main character’s I’ve come to know. Throughout the series, I’ve gotten comments from a lot of Anime Evo readers that have stated that Natsu doesn’t have much of a personality. Given that he’s a shounen lead, that’s a fair assumption, but one that I truly disagree with.

Natsu’s been a bit of a constant force, but his improvement and his ability to get things done in tight spots has been one of the highlights of the series. Natsu’s the powerful bull doser, sure, and he even prefers to use his fists rather than his brain at times. But I truly enjoy how he fights for what he believes in, for those closest to him, and never backs down.

He’s somewhat childish, but he has the power and the hard work to back up all his aggressiveness and his way of life. Honestly, there’s really no character like Natsu, and he’s a very different beast from characters like Luffy, Naruto or Ichigo.

He’s a confident, cocky guy who fights for what’s right and looks like a complete badass while doing it. 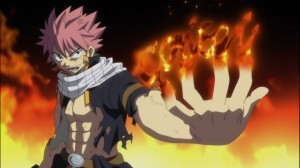 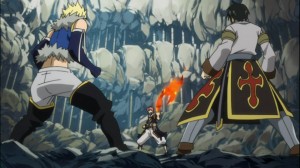 And yes, the fact that Natsu took on both Sting and Rogue after witnessing their Dragon Force forms, was darn awesome. If you’re not impressed by that awesome, manly show of bravado that Natsu showed off, then I can honestly state that you’re in the wrong show. If that moment didn’t feel epic, make you chuckle and smile with excitement, then I can only say that this series isn’t for you, as unforunate as it is.

The fact that Natsu is taking on both Sting and Rogue has me super excited, in the same way I was suprised, excited and enthralled by both Erza and Laxus’s recent battles. While itt’s sad that the next episode will mark the end of the series, I so cannot wait for it. It’ll be a bittersweet ending for a series that was only continuing to get better and better. 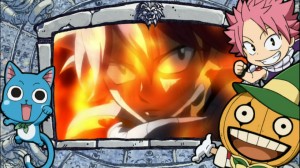 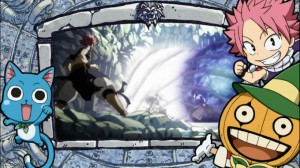 This is it. The last episode of the Fairy Tail series. If you’re still following this blog, then see you next week for the last time I suppose?