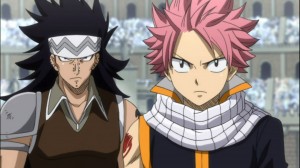 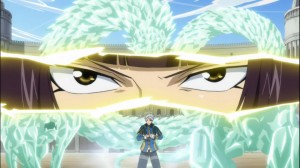 Second last post of the 6 episode review fest before the series ends?

I won’t harp on too much about this episode. The main battle that it focused on was the battle between Lamia Scale and Mermaid Heel. I think it was shortly after this episode was released, that we got the actual announcement announcing the end of Fairy Tail on March 30th 2013.

From how this episode went though, you could never have guessed that this was a series on its last legs. In retrospect I probably wouldn’t have liked this episode as much as I did if I had known about Fairy Tail’s imminent end. 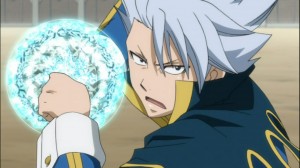 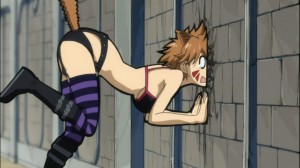 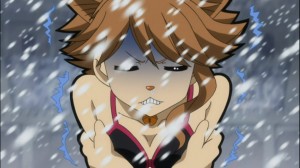 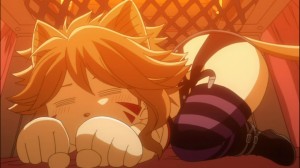 The battle between Lyon and Kagura was definitely the more interesting part of the episode. I think some of the lingering silliness from the Ichiya fight made it into this episode as well, as the whole thing with Milliana and the cat related jokes was just silly. A bit too cartoony for my tastes, and I had myself shaking my head at the series like a concerned parent. I was really glad when Lyon finally put Milliana out of her misery. 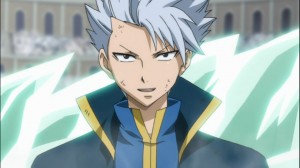 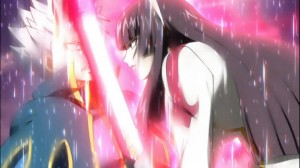 That said, the battle between Kagura and Lyon really was one-sided. I was pretty dissapointed, as I had wished that Lyon had one-upped Gray a little bit. Seems like Ice Mages can’t really shine that well in this series… Kagura took out Lyon without even really unleashing most of her power. 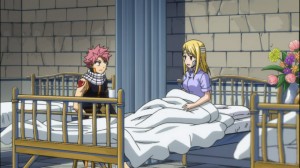 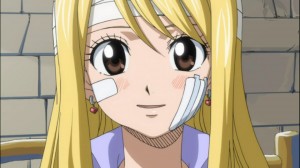 Beyond that, this was the episode where Lucy also woke up after all the injuries she sustained. Given that the series is ending soon, I’m really really really curious about the conversation that Lucy and Natsu had in the infirmary before his big match. The shipper in me is hoping the talk was of romantic nature, but the logical side of my brain argues against it. I really have no idea what they did talk about, but it was something that had both of them being calm, collected and smiling at each other. Given that there are a scant two episodes after this series, I fear we’ll never really learn what transpired in the room before the series ends it tenure.

Sad but true. As the episode ends with the start of the battle between the Dragon Slayers of both Fairy Tail and Sabertooth, I think it signalls the end of the series with a large bang. At least the series will end on a high note right? 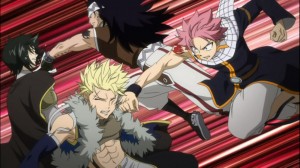 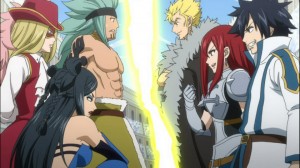 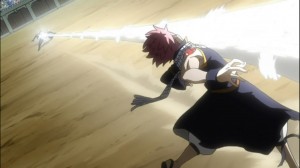 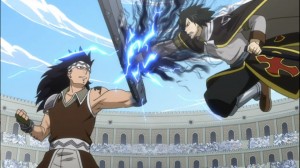 It definitely seems this way, as this episode only gave a small snippet of a much larger battle, but damn was it satisfying. Fairy Tail’s action firing on all cylinders, we had Natsu and Gajeel totally outclass both Sting and Rogue easily. After what Sabertooth did to Lucy, it was beyond satisfying to see Natsu and Gajeel outclass the Sabertooth Dragon Slayers. 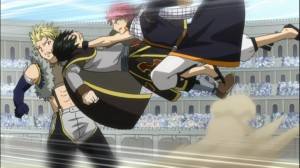 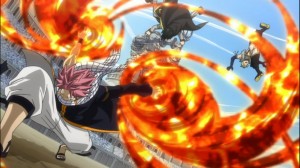 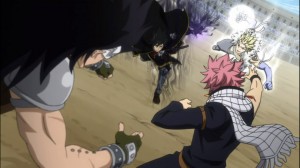 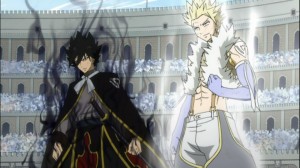 And of course, the episode ended with both Sabertooth Dragon Slayers activating a new move their “White” and “Shadow” drives. If the first part of the battle was any indication, Fairy Tail is definitely going to treat us to one of its most exciting battles before it bows and exits off the stage of televised Anime series.