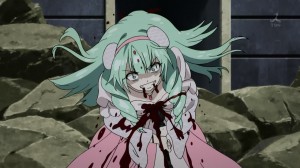 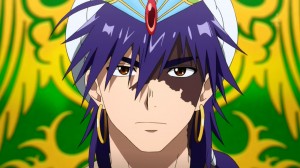 Well Magi is certainly building up to a pretty crazy situation. Things aren’t looking great for either Alibaba’s group or Sinbad. Both are either dealing with or about to deal with major threats that will not be easy to stop. It’s more of an immediate problem for Alibaba who has to deal with these guys if he’s going to get Zagan back to Sindria and be able to heal up Sinbad.

Not that things are going smoothly for Sindria either. Their barrier is down and they just won’t have enough time to get it back up before the attack begins. They are just going to have to hold their ground while not having Sinbad in fighting form. It does leave them rather short-handed. It will be up to everyone in that kingdom to do what they can and repel this attack. Not that I don’t think they can, but could certainly use Sinbad in this situation. 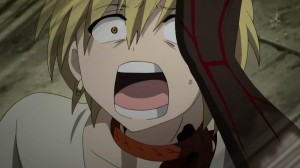 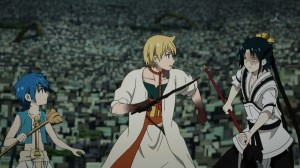 One positive is that I suspect Zagan has already joined with Hakuryuu and that’s why he came back. I can’t imagine he’d just drop off Morgiana and that girl without actually talking with the djinn first. In that case they might have a chance though can hardly expect Hakuryuu to make much use of a djinn’s power moments after gaining it. And this is all assuming he did acquire Zagan’s power and the djinn isn’t actually working to heal Morgiana as we speak. It would give them an edge though and let them quickly move on out of there.

Either way it doesn’t appear like this fight will be easy. While Aladdin is right that they could win through atrition, they don’t really have the time for it. They have to bring these two down and hurry back to Sindria to heal Sinbad. The problem being that through the use of the dark metal vessel that girl has turned into quite the dangerous opponent. It does show how far a person can go if they can handle that kind of transformation. It sure did a number in freaking Alibaba out and putting him in more danger than needed. 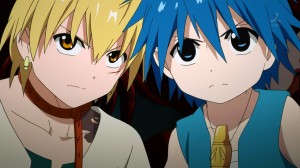 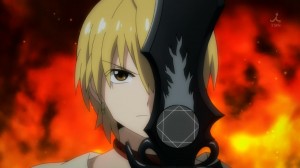 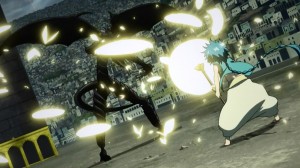 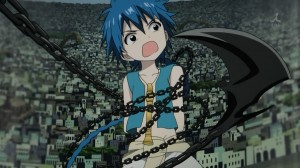 I feel bad for Isaac and Dunya, since I doubt there’s any chance of them surviving either way. Like Kassim even stopping them will likely just result in their bodies wasting away. The most Alibaba and Aladdin can do at this point is just stop them and let their spirits be freed. Clear that they both went through a horrible experience when her country fell. While she may have a wish to restore it, she’s already lost to her darkness and despair. An interesting foe for Alibaba to take on of course since he also in a sense lost his country. Although there is hope for it to survive. At least thanks to Sinbad it will hang in there until Kou is fully stopped and the nations it has taken over can be restored.

This episode did show how Alibaba and Aladdin are both improving and getting stronger. A smart tactic by Aladdin to just wear down Dunya with simple shots. He has a practically unlimited supply of magoi. Long as he doesn’t use way too much at once he can keep going in a lengthy fight. Besides another magi there aren’t many opponents who can stand up to him in that respect. Alibaba as well finally found a way to better use his djinn-equip. Shrinking down the blade to a size he can actually use his swordstyle with should improve his combat abilities by leaps and bounds. Though regardless of their growth, the opponents they are facing here aren’t going to be easy to bring down. 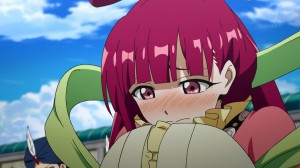 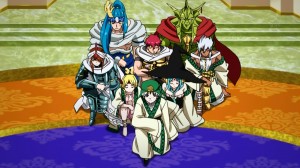 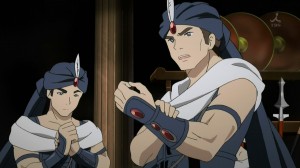 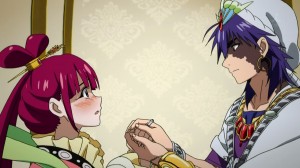 Not that things are going smoothly in Sindria either. Sinbad isn’t in any condition to really fight and it will be all up to his Eight Generals. It won’t be easy for them, but will just have to make full use of their household vessels. If they can take on the stronger foes then maybe the regular troops will be able to keep things from spiraling out of control. Either way it won’t be easy and the turning point could definitely be if Alibaba and company can make it back somehow. Maybe Zagan can actually teleport them back from the dungeon.

Another person who could turn the tide would be Kougyoku. It was kind of a hard hit for her to hear all that from Judal and know the danger Sindria is going to be facing. The whole situation has to be rather conflicting for her. You could see earlier in the series that she did wish more to be a warrior than some political piece to marry off for convenience. Although even then the girl was one who would like to find her own love and marry that person. Now she’s kind of facing a diverging path. Going back to Kou would allow her to follow that warrior path even if she’s lost political standing. But that would mean at some point having to fight against Sindria and Sinbad, who obviously she’s fallen for.

I felt bad for her when she first started to talk to Sinbad. Was blatantly obvious how upset she was about the whole thing and certainly didn’t want Sinbad to be angry or hate her. At least that was taken care of pretty quickly. The question is whether she will join up in the defense. Considering she blew away Ugo, there isn’t a question regarding how powerful she is. If Kougyoku steps in then that might help turn the tables a bit. But even if this isn’t the Kou Empire attacking she could run into trouble fighting against the Organization here.

What has me more curious is how Sinbad handled the whole situation. It wasn’t bad to calm her down and even suggest she should step away from Sindria for her own safety. But I’m left wondering what the guy is really thinking. Is it just being a good guy? Or was he actually trying to take advantage and make use of what could be an important fighting force for the kingdom? I want to give Sinbad the benefit of the doubt, but this is a pretty dangerous situation. The question I suppose would have to be if he’s really so dense that he can’t tell how this girl feels about him. 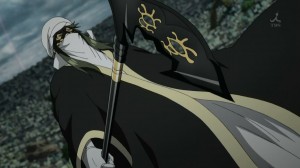 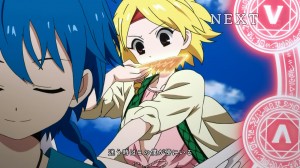 Either way the next episodes should be pretty action packed. The battle for Sindria is about to get underway and somehow Alibaba’s group needs to wrap things up against a powerful duo. Nothing is going to be easy, but I’m sure they’ll find a way to take care of this. If Aladdin can use that power that showed Judal his past it might mess up Dunya and Isaac enough to quickly resolve that fight.
Score: A-