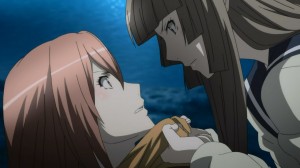 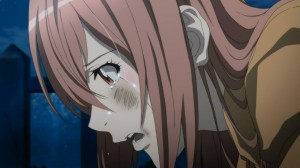 Well damn….that was a pretty intense episode in more than one way. Can say I was surprised in how it all turned out, though it made perfect sense. I give a salute to Fuwa Aika, who easily becomes a favorite character for more than one reason. Really, I had wondered all this time about who was the girl we really saw. Was she the mage of Exodus acting like she was normal, or was she just the girl we saw in those flashbacks. In the end it was a combination of the two. For all the worries Fuwa Aika, was simply Fuwa Aika to the very end.

My condolences to Hakaze in this episode. The position she was in wasn’t a pleasant one. While she talked a good game in front of Yoshino, in the end she still did everything in her power to stop Aika. She just didn’t want to see those two suffer because of the brutal truth. That Mahiro would be left with no one to hate and Yoshino would have to accept that Aika took her own life. Hakaze gave everything she had, but it just wasn’t enough. The simple fact of who they were made the difference. While she had all the power that her clan could posses it was nothing against the pure power of the Mage of Exodus. Nothing that Hakaze did even came close and the whole time Aika was simply blocking the attempts to capture her. 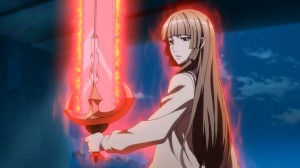 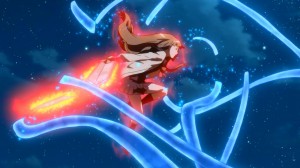 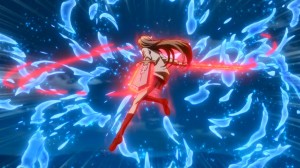 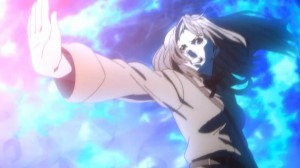 Really it’s a tale of two women doing everything they could for the sake of those they cared about. Hakaze was trying to protect their hearts while Aika wanted to save their lives. If it meant saving them from death then Aika would willingly take her own life to protect them. Both at least understood where the other was coming from, even if they went about their methods in different ways. The ‘fight’ itself was pretty entertaining. It was flashy and spectacular watching Aika guard herself and show a little bit of what a Mage of Exodus could do. Without a doubt, the most powerful character in the series.

I’ll kind of go on a rant about Aika at this point. For the whole series I wondered about her and now finally the full picture was there. She was simply a girl who was saddled with extreme power and knowledge at a young age. Isolated from people because she just knew how different they were and couldn’t avoid the subconscious isolation. What saved Aika and the world was Mahiro and Yoshino. Those two were drawn to that girl and maybe it was because they could sense the loneliness she was carrying and wanted to protect her. Aika might not have been so willing to end it all if she hadn’t met them. Kind of leads to a crazy question of what really killed Fuwa Aika? Sure, her own power did the deed, but what lead her to her destiny isn’t so easy to pin down. Hakaze time traveling? Yoshino and Mahiro getting involved with both of them? Or simply that the Tree of Genesis and Exodus existed in the first place? You go too far back on the chain of coincidences and it gets complicated. 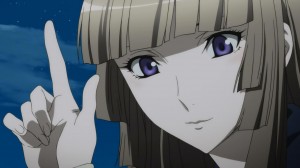 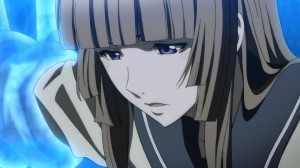 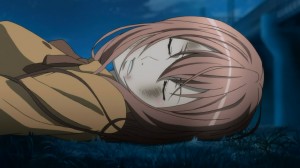 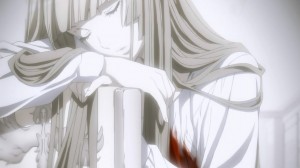 I almost feel the need to apologize to Aika. I honestly had doubts about her the whole way through though it was up and down at times. It really surprised me how she was simply Aika. Sure, she had those powers but it didn’t mean she was evil. Maybe what really surprised me was that the speculation was right, but in the wrong way. There was guessing that Aika was the Mage of Exodus and she was involved in her death, but it was under the wrong impression. I wondered if she faked her death or had evil intents. In the end she killed herself for the sake of those she loved. It is a tragic thing, but I can respect her sentiment.

You just have to look at it from the perspective of someone who gained that kind of power and wisdom as a child. Aika was never normal again after she became the Mage of Exodus. She was saved from isolation by Yoshino and Mahiro, but her personality never got straightened out. It’s sad how it all turned out though. You go into it expecting Aika to die, but her death is still a tragedy. They did a good job making us care about a girl who was introduced as dead from the beginning. Always in the flashbacks and it was in this episode that we really got to see Fuwa Aika. A strange girl to be sure, but one who was motivated by the love she had for those close to her. It wasn’t some sacrifice for the world, just one to keep those she cared about alive in it. 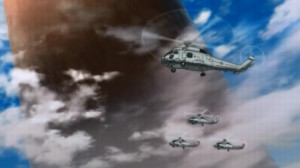 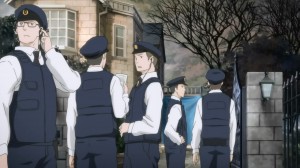 Also, a bit morbid to consider that this whole world even could have happened over and over again. Humanity fails to destroy the Tree of Genesis, everything is reset and because the Tree of Genesis devours civilization there isn’t much trace left. I’m not convinced this has happened too often because you think there would still be some traces like Ozone layer damage, but then you have to consider technology possibly not evolving the same way twice. Still not sure I’m all in on this hypothesis, but suppose it doesn’t have to be right for the series to move ahead. 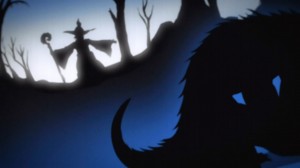 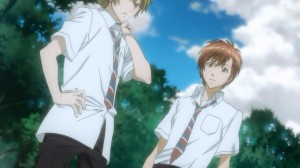 So that’s how it all turns out. My condolences to Hakaze having to go back with this. I do wonder about that letter, but I guess we’ll find out what it says later. With that girl’s personality who knows what it might say XD. RIP Aika, you really were the center of everything. I have to say, this was an outstanding episode.
Score: A+