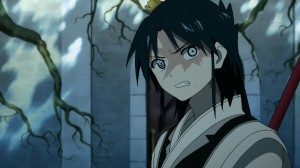 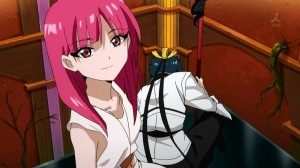 I will say this was quite the good episode for integrating Hakuryuu into the group. It was also a good chance to get an understanding for this guy. The last episode left me uncertain about this guy and not able to really be sure about his intentions. But surprisingly he’s a rather soft guy with a few similarities to Alibaba. Someone with quite the painful past and a goal he feels needs to be accomplished no matter what.

I can kind of feel bad for the guy since he’s walking around with a group that already cleared a dungeon once. It’s tough to clear a dungeon without having done one before. Last time Aladdin couldn’t really use magic and needed to completely rely on Ugo too much. It didn’t help either that they had that stupid Lord causing them problems along with Morgiana actually being an enemy. This time it is completely different. Zagan might be against them, but they have Amon and Aladdin can use some magic. Morgiana also is helping them out which doesn’t hurt things at all. They are just on a completely different level right now. 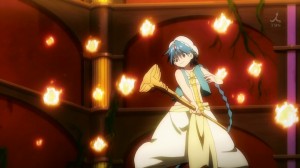 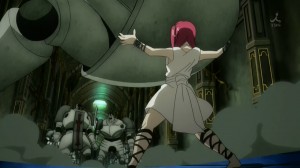 I can kind of understand Hakuryuu’s feelings. We’ve only seen flashes of his past, but he’s constantly been helped by others. I can understand the feeling of wanting to be capable on your own, but sometimes you just need help. It must certainly be frustrating, but he can’t afford to let pride or feelings get him killed. Like Morgiana said, there have to be people wanting to see him live and so they’ll step in to save him if that’s what it takes. It’s just a tough spot, you want to accomplish big things but still aren’t at the point of being able to actually do that. Of course can also tie in the problem that he thinks he has to do it alone.

You could definitely see the similarity to Alibaba as things went on. Just pushing people away and trying to accomplish everything alone. In the end all it did was give more ways for Zagan to mess with them. It was readily apparent how Hakuyuu was feeling and he played on that. This guy is hardly useless, but an attack that takes so much out of you isn’t something you can use on the grunts of the dungeon.

Goes to show that Morgiana has good tactical sense in a fight. If she can’t kick things to death then she’ll just use a golem like a club XD. Her brute strength really is a terrifying thing. If you can tie some magic into them via the household vessel then she will be a true force of destruction. Not surprised she picked up the similarities between Hakuryuu and Alibaba either with how focused she is on Alibaba in general. 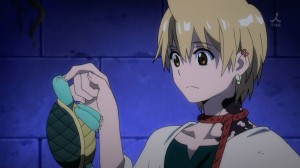 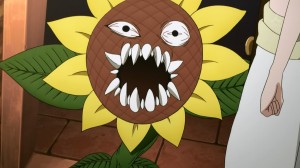 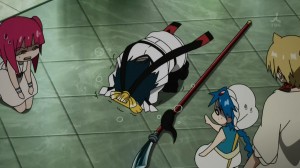 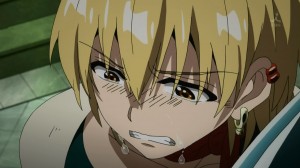 Regardless Zagan really is a twisted piece of work. Actually going ahead and using the local populace as fertilizer. Using those people in order to breed his ‘cute’ monsters. Now it makes sense why the dungeon was sucking people in. The whole goal for Zagan was to lure people inside and then use them like that. A real tragedy and a terrifying situation to be a part of. The only way to help them is to force Zagan to undo the spell and return the people back to normal. Aladdin has just reached the level to know that he can’t do anything about that.

I’m just surprised Solomon made a djinn like that. A pretty twisted djinn that has no problems with doing that kind of thing. Of course dungeons are supposed to be dangerous so I’m not calling out the djinns as saints. After all it’s not like the other step in to save people who are about to get killed by the traps and monsters. But this is another thing entirely. It’s actively taking people who had no desire to enter the dungeon and abusing them. Either way they are going to need to stop this guy and save the poor girl who got caught up in this.

The breakdown for Hakuryuu was pretty entertaining as was Alibaba going to tears himself. Though I still think the funniest part was the attack of the wild turtles XD. Those monsters really are useless unless Zagan’s music turns them violent. Well, I’m just glad Alibaba and Hakuryuu worked through their issues. Kind of surprising seeing Hakuryuu just break down like that. Even Zagan who urged it along was pretty much stunned silent by how extremely upset he got. 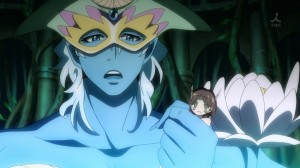 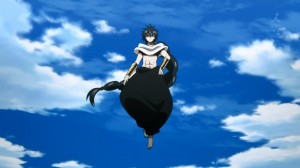 Things aren’t getting any better with Judal showing up at the end of the episode. Best of luck to Sinbad. Next episode should be interesting just with that plot point alone. Also, I’m looking forward to seeing that djinn get kicked around a bit by Alibaba and company.
Score: A-