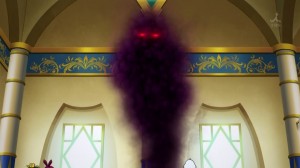 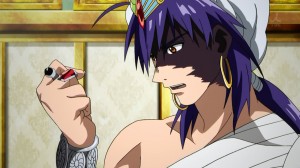 Well as suspected that snake bite really became a problem for Alibaba and the others. A fairly sneaky way to infiltrate Sinbad’s kingdom for sure. Hide inside a guest and then make your move when the moment is right to. Really turned into a problem for everyone with that magical infection that was spread from it. It could have been worse of course with Aladdin blocking a good portion of it and limiting the effect. This does give the group a goal to aim for and really just something to get them back into the world doing something.

I both give credit to Sinbad and question his thinking at times. It was certainly a bold decision to charge in and just cut that guy down the moment he appeared, but did end up making him pay for it with that bloody mess. Although it figures that he could have done something about his condition by himself, but is just putting up with it so Alibaba and the others will have just a little more motivation to get the job done and get themselves back in one piece. Despite the fact that I think the goal was to drop Alibaba and Sinbad into depravity, it wasn’t a plan that would have worked. 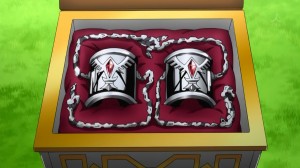 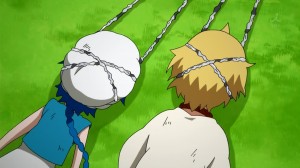 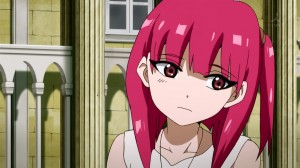 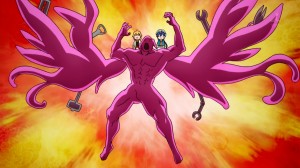 It was good to find out just why Sinbad stopped with the amount of dungeons he cleared already. He had a pretty good streak going there, but had to have stopped for some reason. Not a bad one to say that the djinns decided he had enough. I suppose that giving him any more of those metal vessels would just make him completely broken. Have to save some for the rest of the candidates. Regardless it does leave him as the most powerful being out there if he can make full use of all the abilities he’s picked up.

What was nice was getting to see what Morgiana came up with for her household vessel. They really cleaned those cuffs up and turned them into quite the nice decorative pieces. Though it is a question what she’s going to do with those chains and the best way to make use of them. Her first effort….well wasn’t the best one. It was effective in taking down Aladdin and Alibaba, but I doubt that was seen as a success in her mind. It’s tough to figure out a new possible weapon anyways. Not like there isn’t time for Morgiana to figure things out. Will say as well she has posing down nicely XD. Though her imagination makes me wonder at times with her imagining herself as some giant flying monster. Not sure that’s what they meant when they called her their wings XD. 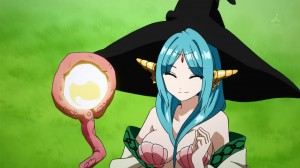 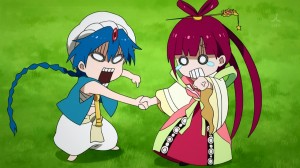 Hopefully the tricks that Aladdin has picked up will come in handy. He’s starting to get the idea about giving the Ruhk orders and how effective that can be. It’s not just about releasing a ton of magic, it’s about making the best use of it. I’m sure this upcoming dungeon will prove a good setting for them all to start growing and developing their powers. They did just fine the last time, but I’d assume this trek isn’t going to be very easy at all.

A somewhat comical encounter between Aladdin and the Kou Princess. Despite the seriousness of their previous encounters this was pretty silly. A handshake showdown was pretty fun all things considered. Makes you miss Ugo, but for some reason or another can’t really hate her. It was just a bad situation all around and in the end Ugo’s sacrifice gave Aladdin a chance to grow into someone that doesn’t need to rely on the power he had to give. 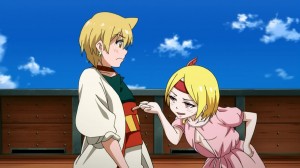 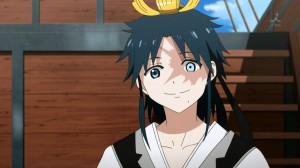 I’m not sure how to read that Kou Prince. He doesn’t exactly give the first impression of a kind and gentle soul with the whole wanting to destroy a country thing. Yet we’ve seen quite a bit of maturity on his part. At the same time trying to constantly point out why someone should hate you isn’t the best way to make sure you get along…Will have to keep an eye on him to get a full picture of his personality and goals. I’m just not ready to throw full trust behind this guy quite yet.

Also on a light note, my condolences to Pisti. Sadly for her Aladdin doesn’t recognize anyone as an “onee-san” unless they have the breast size to back it up. He’s pretty focused on his personal interests in that respect XD. 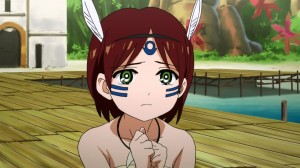 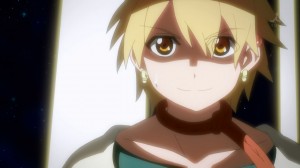 So this was a good episode setting up what is to come. This dungeon will be a good test for everyone. A good opportunity for Alibaba to work through some more issues. Though I wouldn’t be eager to jump into a dungeon that “eats people.”
Score: A-