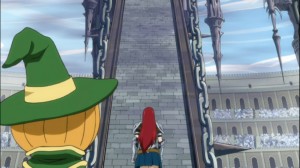 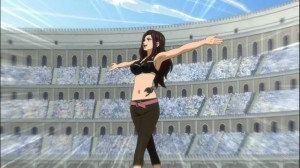 Seems like these multiple episode posts are becoming a  bad habit of mine, but I have to admit that I’m not all that sad that I got to watch these three episodes in one go. Its a bit of a conundrum for me, as I ussually don’t have a lot of time these days, and talking about Fairy Tail comes kind of naturally. In many ways, Fairy Tail is a kind of ideal series for me. The things I like are mostly here, with the exception of a slightly stronger romance element. The character moments and most importantly for me, the pacing, are what Fairy Tail apart from nearly every weekly shounen series currently available. 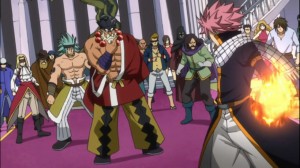 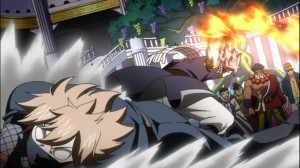 Going in order, we started in episode 166 with Natsu taking on the Guild master. I think it went as expected, though I was impressed by the fact that Natsu was able to take down not only that Ninja dude, but rush forward and attack the sleazy  and disgusting Master of Sabertooth. Not only that, it seems that Natsu was able to gain that twisted strength obsessed master’s respect, while simultaneously sparking a fire in Sabertooth and more importantly its two Dragon Slayers. While Sting is a strength baka much like Natsu, its interesting to note that emo black hair did take Natsu’s words about comrades and nakama to heart. 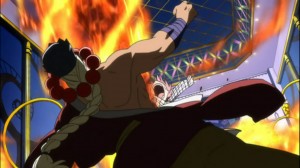 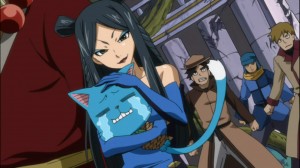 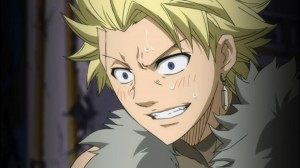 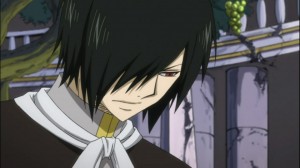 Of course, if only for plot convenience, Natsu didn’t actually get to finish his fight with the Guild Master. I think there’s no doubt that Natsu would’ve probably lost if the fight had dragged on, but Happy’s capture from Minerva kinda served to halt the battle and any further skirmishes. I think if nothing else, Natsu’s actions cemented his place as the heroic character of the series, and made the rather disgusting public humiliation scene in the previous episode a bit less painful to swallow. That said, I’m still kind of confused as to why no one else reacted in the same way Natsu did, but I suppose everyone else thinks its “just low” to publicly humiliate a woman and that’s the end of it. 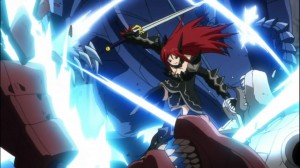 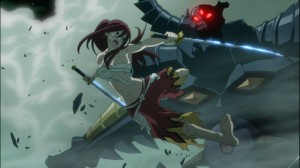 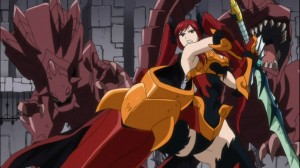 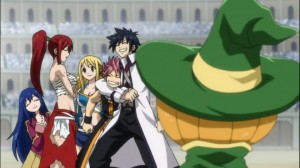 But I digress… The second part of the episode set us up for what was the most entertaining and likable performances from Erza and in turn Fairy Tail in a while. Erza choosing to take on all 100 monsters fit perfectly with her personality, and It was all but assured that she’d take that action as soon as she got the number 1 slot. While not surprising, it was nonetheless pretty darn entertaining and exciting to see Erza go all out on a hundred strong monsters, shocking ally, foe alike. 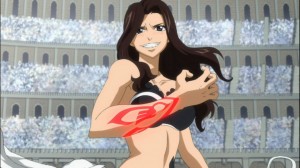 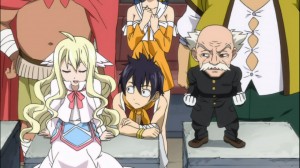 And Cana didn’t do too bad with her Fairy Glitter attack on the MPF machine. I kinda think that Cana getting that power again was a bit of overkill, but I guess Mavis is content with giving her that power and having her use it. I guess given that she’s Gildarts’ daughter, she has enough magic power to be able to handle Fairy Glitter, but still… It seemed like a somewhat of a cheap power up for a previously weak character. She did get a 99999+ attack power out of it though, and gave Fairy Tail B a victory after quite a while though, so I guess its kind of okay. 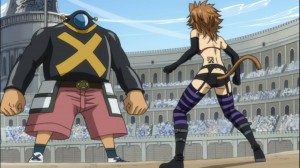 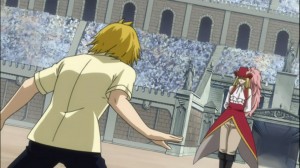 The third of three episodes, 168, was largely a setup episode for one the most exciting moments in this arc. While the battles between Quantro Puppy (XD!!) and Mermaid Heel, as well as the battle between Sabertooth and Blue Pegasus were interesting, Everyone was more excited about the imminent battle between Alexei and Laxus, as the episode’s title revealed. And while we didn’t get to much of a battle at all in the episode, the setup for next episode was nothing short of jaw dropping. 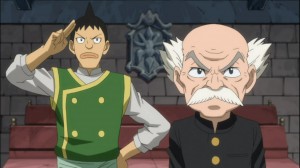 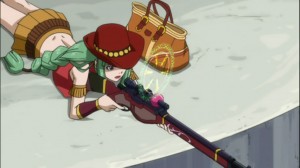 I have to kind of question how perceptive Fairy Tail is, because they totally can’t see through every one of Raven Tail and more so Ivan’s schemes and tricks. Despite keeping a constant watch on Raven Tail, Raven Tail was easily able to enact its plan. And man… quite the exciting plan indeed. 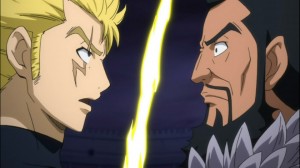 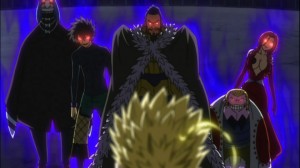 It turns out that Alexei is actually Ivan himself, and the rest of what’s happening outside is an illusion. From the looks of it, Ivan himself would be more than able to take down his son. The fact that he made it so Laxus had to face all of Raven Tail’s strongest at once, makes this entire fight kind of chilling. Ivan’s main plan is revealed as well, as he wants to get the Lumen Historie. I’m assuming the Lumen Historie is actually the place that Gildarts was shown as he became the Guild Master. Interestingly, I don’t doubt Laxus in his claims of not knowing about it. Given that Laxus himself was expelled for a little bit, he never really got the chance to be able to become the Guild Master himself. I’m sure he’ll eventually be the one to fill the role, but until then I suppose he’ll have to prove himself by taking on the entirety of Ivan and his guild.

All in all a good three episodes. I hope to get back into shape and cover these weekly again. With a new semester and a new schedule, its taken me longer to adjust and make time for covering all the anime I do. For those who actually care to read my stuff, I apologize for the problems, and I appreciate you still reading my stuff. 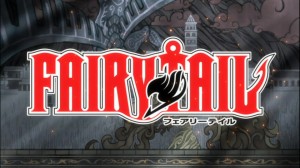 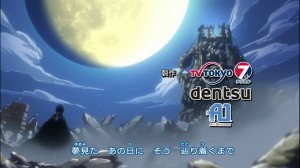 Not a bad OP per say, but just kind of… old sounding. Fairy Tail has had a lot of great OPs so far, and most of them are great when they embrace the new techno/trance style of Japanese music rather than the old, tried and true “theme song” kind. The animation in the OP was definitely kick ass, but the song was mostly okay at best. I’m not going to speculate on what was in the actual OP, because honestly… there’s enough manga readers here to confirm or deny what I say XD 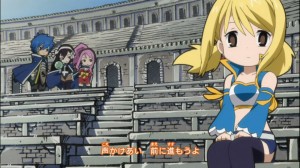 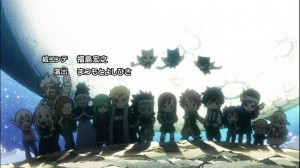 Is it just me, or are the EDs for Fairy Tail getting progressively lack luster as times goes on. I wasn’t a HUGE fan of the last OP, but at least it had some feeling and emotion behind it, alongisde a very melancholic animation. This one is just… cliche chibi Lucy with a fairly forgetable song attached to it. Given Aimi’s work on stuff like Ben-to, I’m kind of surprised. Ah well, they can’t all be winners can they? XD 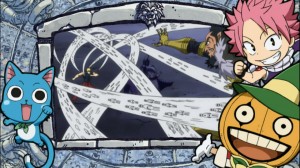 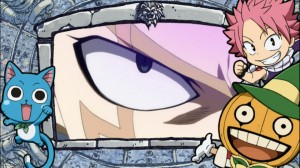 Next week, it seems we not only will get a quick conclusion to Laxus’s battle, but Wendy also makes her debut in the tournament!