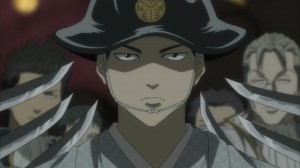 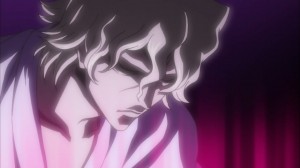 There’s always more happening behind the scenes eh? The final wrap up episode of perhaps one of the most powerful story arcs in Gintama yet concludes with the setup for the series ultimate battle. The status quo for the series does change quite subtly, as all appears to go back to normal on the surface. Of course, behind the shadows, things have taken a turn for the extreme, as the tension in Edo is slowly building towards a boil. 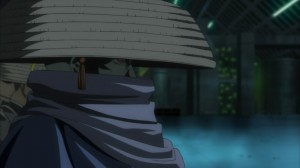 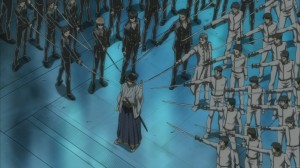 I wasn’t surprised at all to see the Shogun take responsibility for the mess. What I was surprised with, was how he basically sacrificed himself and his position to take down his corrupt uncle, rather than trying to assume control and become a ruler. Its surprising but its still fitting. The current Shogun, was always a figurehead and symbolic symbol in the series so far, and while It would make for a great moment to have him assume control as a just ruler, it would be too dramatic of a shift. The best the man can do, with his mess of a country, is to try and protect it while taking out its most dangerous element, Sadasada. 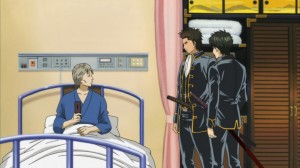 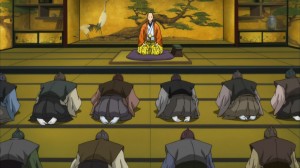 And of course, its revealed that while everyone thought they were fighting to protect their country, their lord (the Shogun) or for Yuzuran and Mazio, the reality of the situation was that they were being used pawns in a much bigger game. I think the big reveal here was just how far Takasugi has come since we last saw him. Last time he was able to convince Kagura’s Onii-chan Kamui to partner with him. While Gintoki has faught for the sake of Yoshiwara and the Kabuki district, Takasugi has been steadily moving behind the shadows in Edo.

And man… Is Takasugi at his most dangerous right now. For one thing, he has Sasaki on his side now, and Nobume as well as a result. He’s also entrenched himself in the countries higher politics and is EASILY able to come in and kill of Sadasada. 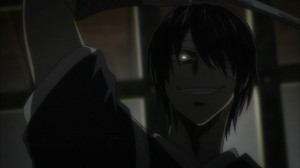 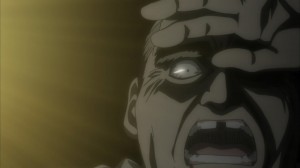 The end of Sadasada was kind of interesting in that it was neither as horrible of a death as he deserved, nor was it all that important. Kind of like the character to be honest, in the end, he was nothing more than a pawn for the Bakafu and a plot device of sorts for the story. The scene with Takasugi cutting him down, showed just how different he was from Gintoki. Its no surprise that he’s the series ultimate Antagonist. 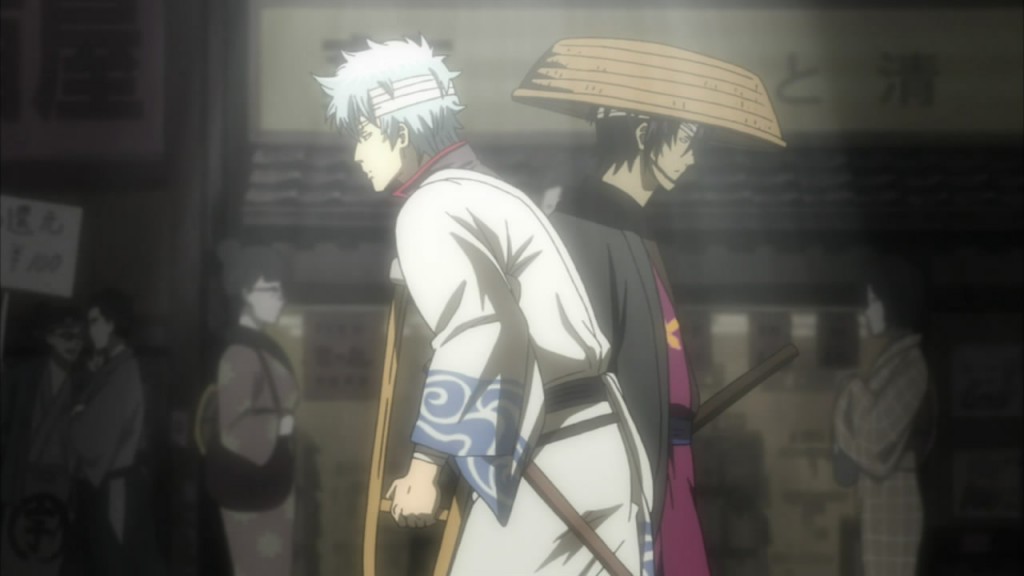 I think Nobume put it best, during her little conversation with Oboro (who survived… ), where she called “One trying to preserve the Legacy of Shoyo and the other trying to destroy it.” In many ways that best represents both Gintoki and Takasugi. They’re both so fundamentally different in how they’re coping with the death of their parent, teacher and loved one. Its a classic kind of story, where one unfortunate act begets both good and evil. 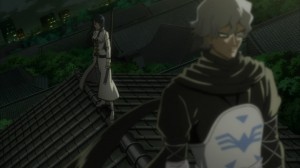 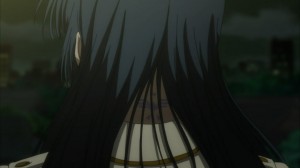 And speaking of Nobume, the show threw another whammy right at us. Nobume’s real name is actually Mukuro and she’s actually part of the same organization/order that Oboro’s part of! Not only that, she was one of the Naraku three as well. Yet, as currently can be seen, she’s with Sasaki and pretty much following whatever his lead is. I think one of the big new mysteries introduced from this arc is what exactly Nobume’s story is, and why she holds Sasaki in such a high regard.

While this means that Nobume will be Oboro’s enemy, what it truly means is that she’s going to eventually go against Gintoki and the rest. When Takasugi works to destroy the world and bring utter chaos, Gintoki will obviously step in to stop him. When that happens, I can see the sides quite clearly as they stand now. Gintoki, the Shinsengumi, the Yaguya family, the people from the Kabuki district and of course, Yoshiwara band together against Takasugi, his men, Kamui and Sasaki’s Mimawarigumi. I’m guessing Katsura will side with Gintoki, but both him and Sakamoto seem like wild cards for now. 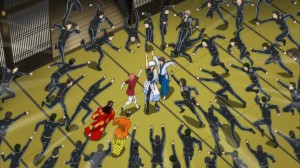 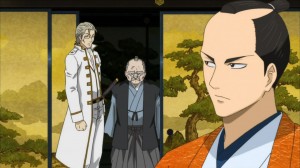 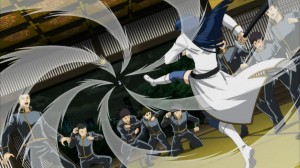 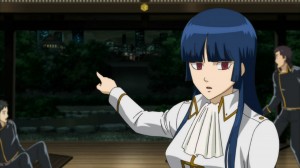 World building conflict aside, we also got the big conclusion to Yuzuran and Mazio’s story. Gintoki got another moment of bad assery as he went straight into the Shogun’s castle, especially given the situation, to help old Gramps Mazio out. Not only that, but I’d say Nobume pretty much stolen the show with her kick to the can, making it all the way to Yoshiwara. I’m kind of sad that Nobume is going to eventually be on the opposite side to Gintoki, because she is one of the cooler characters that we’ve seen recently. She’s also the perfect anti-foil to Okita from the shinsengumi XD 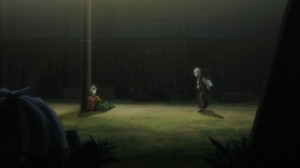 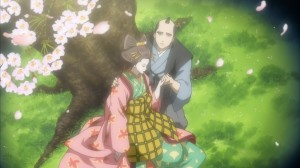 The final moment between Yuzuran and Mazio was very beautiful, with them both getting a nice send off as young people underneath the Sakura trees. The love story and promise that was so powerful that it shook the very core of Edo and changed everything. The catalyst for probaly the final battle for the fate of Edo and the world. 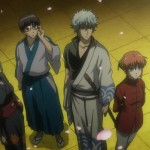 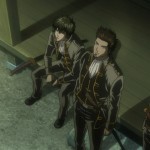 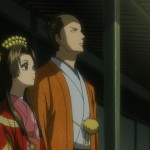 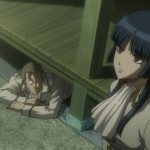 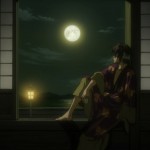 The stage has more or less been set for the final conflict, but when it actually happens, is anyone’s guess. We might see it soon, or we might not see it for another few years. I can’t even begin to guess how Hideaki Sorachi-sensei is going to go about it, but I can’t deny that I’m really excited for whatever masterful final arc he’s building up to. Until then, I guess Gintama has won me over enough for me to cover it weekly. Much like Fairy Tail, this is a series that I have no idea when it’ll end. With two big ongoing series for me to cover weekly, I’ll apologize in advance for how I’ll sometimes be late or slow in my posts (this one is around 3 days late) but, I will try my best. 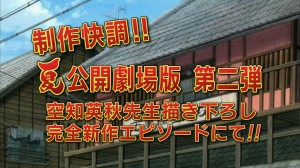 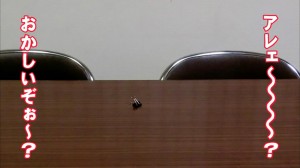 No preview, just another joke about the incoming movie. I wonder what we’ll move into next week? Either way, see you then!