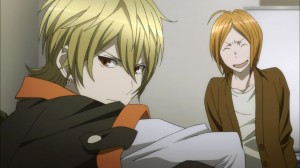 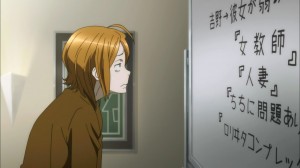 I can still here the echo of that landmine that Hanemura stepped on. I mean did he really need to say that? I mean sure it was obvious to him, but considering we have a man in the room who is out to massacre the man who killed Aika, should we really be revealing her boyfriend at this point? I swear some malevolent force must have made Hanemura the mage of Exodus. Nothing good could pick such an idiot to give that kind of power to.

Of course, hard to call him an idiot with the company he’s keeping…Have Mahiro, Samon, and Jun all coming up with the most ridiculous options for Yoshino’s girlfriend. From a teacher right down to an elementary student. Of course let’s not even touch on the fact that Samon’s actions killed almost everyone in that city. The fact that Yoshino said she was safe should limit the options pretty significantly. You just have to figure out who was out of town at the time that the fruit appeared. But apparently this scene was more for comedy than anything else so they just decided to ignore that. Needed to let the fool of the cast point things out. 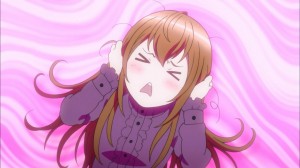 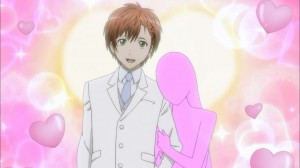 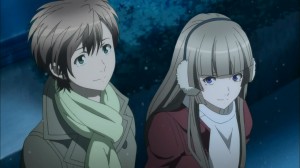 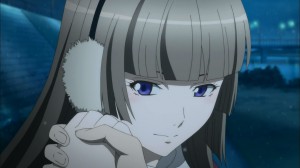 A pretty big moment though between Yoshino and Hakaze. I’m surprised, but not too surprised that Hakaze confessed. She was at her wits end here. This wasn’t just a case of being in love with someone that was in love with someone else. She was legitimately stressed by the idea that her loving Yoshino could kill his girlfriend. Ironically this would be the second time she stressed over the idea of being responsible for Aika’s death. Just this time she didn’t know it. Hakaze is a good person and I can understand her saying “I love you, so find a way to make me stop.” Yoshino has a sharp mind so I can see her wanting him to figure out how to make her fall out of love with him. Even though it’s not exactly something rational.

Yoshino to his credit decided to just come clean to Hakaze. It’s not like she’d outright tell Mahiro and he didn’t want her to be worried about something like that. It’s a tragic kind of situation, but she deserved to know the truth. There is no worries about Hakaze’s feelings now hurting Aika. She is long gone (or so it seems) and the Tree of Genesis can’t touch the dead. It was a bomb to drop though. Can only imagine the shock from Hakaze and how things are going to unfold.

The flashback to the Valentine’s date with Aika was pretty cute. It really was quite the relationship they had. Aika did have a bad personality at times, but she could turn on the cute when she wanted to as well. While she might have had a jealous streak, in this episode especially you could see how she felt about Yoshino. While I have considered her the actual Heart of Exodus for fun, it’s episodes like these that makes me have doubts. She was weird, cute, and really had some nice moments with Yoshino. 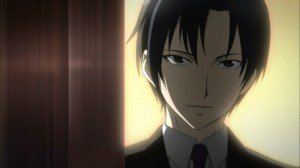 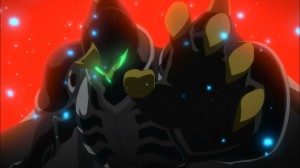 The situation around the world is getting interesting. With Hanemura destroying trees here and there it is giving hope to people. It is also creating a chance to find more people willing to stand up against this situation. Of course also lets Hayakawa regain his authority. If we want to talk about suspicious people why not name him a possibility for having the Hear of Exodus? I did think the talk about dragons and snakes was interesting. Let’s face it they look like trees. Does what they found from that shrine give another interpretation? Though really does it matter what the Trees of Exodus and Genesis are? They are dangerous and powerful of that there is no doubt.

The whole Heart of Exodus thing is a bit annoying. It’s so ridiculous to speculate on this. Based on the interpretation Samon has come up with anyone could be the Heart of Exodus. You just spin the facts a bit and anyone looks suspicious. Hakaze falling for Yoshino could be just a natural result rather than some evil plot. I get that finding this guy would matter, but really there is no good way of finding him. Other than being overly suspicious about everyone. At least the theory that the power and heart were split does make some sense. Hanemura certainly doesn’t have the spirit of someone you’d see as the mage of Exodus. Though the fact that we are limiting the option of there being only one mage of Exodus is silly to me. There are how many followers of the Tree of Genesis? Should we really be getting caught up on the idea that there is one with the power and one with the heart? 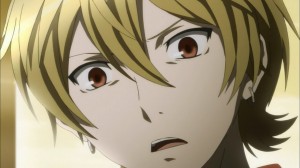 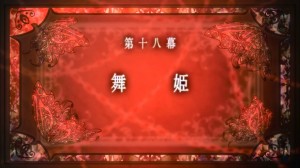 The next episode should be fun though. They might discount Hanemura, but you never know. Mahiro is pretty instinct driven when it comes to Aika. He might just run out and try to find Yoshino to confirm this. It does feel like this episode is a turning point. At least with Hakaze the truth has come out and who knows where this might take events. Aika has always been at the center of things.
Score: A