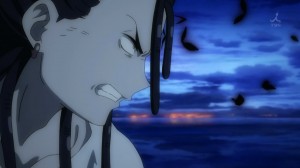 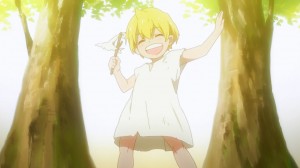 This was a good episode for the showdown between Alibaba/Aladdin and Judal/Kassim. I will say that both did far better than I expected. It wasn’t really an issue of hanging in there for Sinbad to help them out, but rather find a way to save Kassim. Not so much saving in the physical sense, but more about saving his soul. This was the chance for Alibaba to really face Kassim and everything that had been haunting him.

Honestly I think we needed this if only to come to understand Kassim better. For so much of the arc he’s just been an insufferable jerk. At least this episode helped explain why he was an insufferable jerk. He was so caught up in bloodlines and who people are being defined by who’s blood they were carrying. Now I can understand why he had that jealousy/resentment/etc towards Alibaba. He saw them coming from the same place and yet being so very different. Alibaba being able to sneak up on him and take that flag was just another piece in Kassim’s problem. It wasn’t just being a jerk, he just kept comparing himself to Alibaba and pretty much wanting to be that ideal image he had of him. It started with comparing their parents and seeing a kind mother vs. a jerk of a father. Then Alibaba’s royal heritage came up and the gap between them only seemed to get bigger. That had to confirm everything Kassim believed about their blood being what really set them apart. 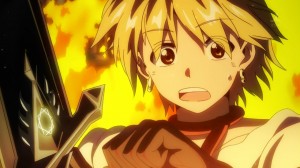 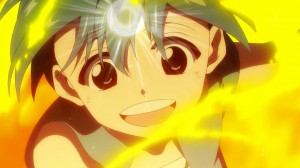 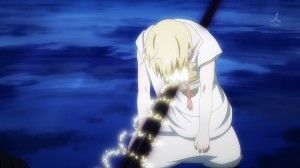 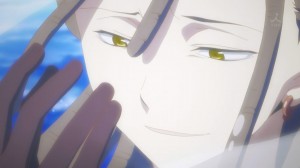 It was good for Alibaba to face all of this. He did think about the differences between them, but wanted them to be close and forced it aside. Despite the fact that they had different heritages, he believed in their close friendships and that they were practically brothers. They grew up in that slum and they survived. But in order to get through to Kassim, Alibaba had to express his thoughts. He wasn’t just the ideal image that Kassim believed in his mind. We’ve seen the weak Alibaba and how he demeaned himself in the first episode of the series. He was hardly living like a prince back then. What Kassim needed to hear though was how much Alibaba had thought about things and how much he wanted things to be better. How there had to be a way for people to be happy even if there were numerous differences between them.

So in the end Alibaba did accomplish the goal of saving Kassim. He hit home that just getting angry and trying to become someone else isn’t the solution. No matter what he did he could not be Alibaba. Maybe if he had accepted that fact and tried to be Kassim things would have turned out better. They could have both striven to be the best they could be and still have been the best of friends. While I hadn’t liked Kassim at all to this point they did a good job trying to redeem him. Let him see just where he went wrong and actually feel sad about it. That he made the wrong choices and in the end destroyed himself. But, even though he destroyed his life, his spirit was freed and able to move on.

The majority of this episode was the confrontation between these friends. Who at the end could finally return to being friends without hidden agendas or hatred. The rest was the aftermath and of course Aladdin helping Alibaba reach Kassim in the first place. They are a good combination with Aladdin having at least picked up fire magic. In a sense it makes them a perfect combo. Alibaba can just go all out and still have a way to recharge. That was a pretty desperate charge made to get the sword into the black djinn. Some nice cover-fire from Aladdin made it all work out. 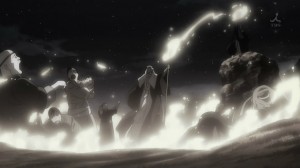 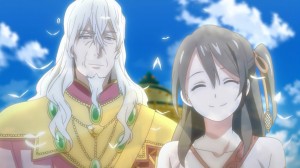 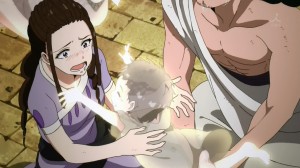 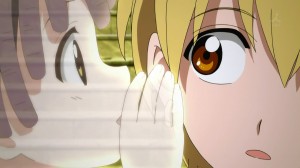 There was some interesting development or insight into Judal. Calling him a fallen magi certainly works. Aladdin caused a few flashes of memory to bring up in Judal and the story they tell isn’t pleasant. I’d guess from those images that Judal’s village was attacked and his parents killed by this mysterious group. They realized that Judal was/could be a magi and took him as a baby. From that point they probably worked to corrupt him and make him their own personal magi. He could help Dungeon Conquerors that they selected. It probably helps explain why he has such a messed up personality. If he’s been brought up by this group then power and destruction is all he would really understand.

It was a mixed result for Alibaba. He did manage to stop Kassim from being a terrible monster, but in the end he still died. His fate was sealed the moment he injured himself and became the core of that dark djinn. There was no saving his life at that point. However, Alibaba didn’t lose everything. Kassim’s soul could meet up with his sister. Everyone else got what might be a scary visit from their loved ones, including guards who happened to die during this incident. It was good for Alibaba to see his parents in that sense. Seeing Kassim and his family should let him start moving forward as his own person. A lot of people have died, but not everything was lost. 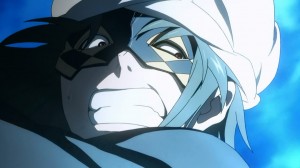 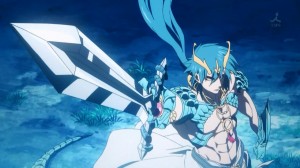 One can’t talk about this episode without discussing the awesome assault of Sinbad and his group. They just unloaded on that Banker/Weapon Dealer (whoever the heck he really is). Once they got the household vessels back they were just unstoppable there. Even in Sinbad’s injured condition he was still able to do a surprising amount of damage. It shows why this group would be so concerned about him. A man who has gone against their plans and gathered so much power and influence. That’s not someone they will be able to easily deal with.

This group at the end is going to be a problem. There is some mystery as to what they actually are. This is a bunch though that apparently has existed for centuries. What is the point of their attempt to cover the planet in darkness anyways? Aside from being evil for the sake of being evil. This episode at least seems to have unveiled the true enemy of the series. A pretty massive organization of people who can really cause trouble. In the end they still have Judal as their tool and are bound to create more problems down the road. Should be interesting to see what happens next. 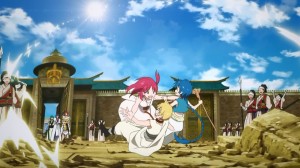 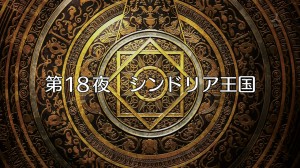 Now, it’s time for a bit of aftermath. This arc has been rather massive and a lot has gone on. A good chance for everyone to cool down a bit and think about what to do next. While Alibaba intended to lead the effort to turn Balbadd into a Republic, that’d be too boring. Either a time skip will come or they will find someone else to take care of the logistics. Looking forward to seeing where the series goes after such a huge arc.
Score: A+