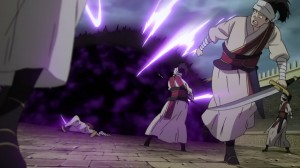 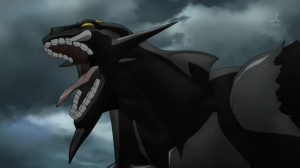 This was both a tough episode for Alibaba and a great chance for him to step up as a character. It is completely understandable that he would be struggling to kill Kassim. For better or worse he’s like a brother and family. No matter how evil he’s gone it just isn’t easy to suddenly go on the offensive. Even worse when that member of your family suddenly turns into a giant black monster that is destroying everything in sight. In a moment like that it really isn’t a surprise to see a person just freeze up. Luckily he really stepped up as the episode went along so it turned out alright in a sense.

Looking at that dark djinn it appears like it is just acting on instinct. That instinct being fed by the feelings of the person who is at the core of it. Therefore Kassim’s hate and anger towards the royal family is driving the actions of this djinn. Not a good thing for the remainder of the royal family that he would like nothing more than to kill. Probably not good news either for the royal guard who got pretty heavily decimated. I have to give those guys some credit though for holding their ground when needed. They didn’t have a chance to fight against something like that, but did what they could. 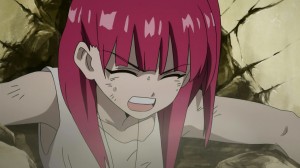 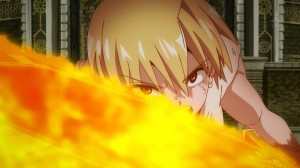 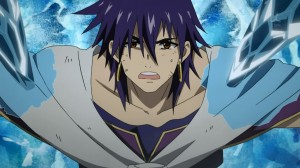 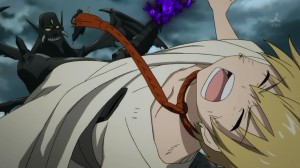 Some nice back and forth between Alibaba and Morgiana. Morgiana was needed to get Alibaba to wake up and attack. And while it was a bit suicidal Alibaba did get Morgiana to help him out in his desperate attack against Judal and Kassim. They pretty much were the core of the attack during this episode. Just a case where Alibaba could do the most damage with Amon’s sword. Though I have to say before the gravity power started being abused Morgiana’s kicks did some damage. On that note Morgiana’s durability is somewhat insane. She gets flung off into a distant building and survives. She even manages to come back and help out to the best of her ability.

Of course can’t count out Sinbad. He’s doing his best out there with limited resources. At least finally those stupid thieves are making their move to return the metal vessels. Shocking what can happen when everything starts going to hell on you. Suddenly make a quick buck doesn’t seem to be as important. As always though that guy is pretty damn impressive. He managed to restrict the djinn’s movements for a time. Considering that thing is just full of people’s negative emotions that was pretty good. Unfortunately he took some painful hits from Judal when he showed up. 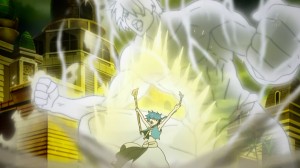 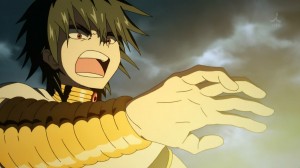 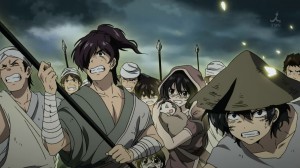 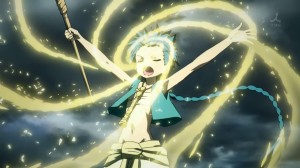 On that note it figures Judal would show up to cause trouble. I guess this is what Ugo meant. Without help there is no way that Alibaba could survive an encounter against Judal and Kassim. Judal seems to be getting a power boost from all the black ruhk in the area which again is a problem. That guy is powerful enough as it is, he really doesn’t need any more power. A scary thought is the idea that with enough effort he could control the Dark Djinn like a pet. I guess a messed up Magi like him would be suitable to line up with a monster like that. Definitely very different beings from the normal Djinns that Solomon created.

But it did allow us to have a second round between the magi, because Aladdin finally returned! Sadly he doesn’t return with Ugo, but he has picked up some tricks that will finally make him a force in a fight. It’s clear that he picked up a great deal of knowledge that will be helpful going forward. Now he can use some magic though he’s still not quite on the level of Judal in that respect.

It does make me wonder what Aladdin’s plan is here. Is he just trying to buy time for Sinbad to get his metal vessels back from the thieves? If he can come back out with those then they should be able to turn this around. Alibaba might not quite have his power mastered, but that guy sure does. It’s just a question as to how much they can do in this situation. Alibaba’s sword has been busted up so he’s not exactly at full strength here. But Aladdin is pretty confident so they should have some chance to pull this off. 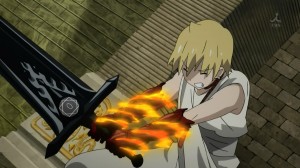 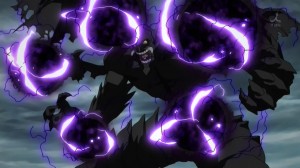 So, I’d say this was a pretty good episode. A lot of action, but throughout the fight you could see the inner struggle for Alibaba. He goes from a guy who is frozen to one who will get himself beaten in order to try and save everyone. When he just focuses on others he does get a tendency to self-sacrifice, but he does everything he can. Next episode should be a good continuation.
Score: A