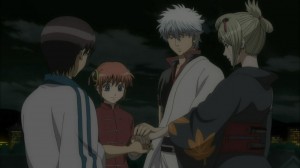 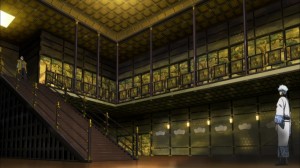 Honestly, If you’re not watching Gintama right now, then you’re missing out on one of the best anime storylines to date PERIOD. Gintama is a series that’s unique in so many ways and breaks so many conventions that its not really possible to quantify or measure the awesome that it exudes. In a rather out dated review, I gave the original first season a B+, and since then, Gintama has truly come a long way. I think what’s perhaps the most amazing thing about Gintama is that it can do everything. Much like its Jack of All Trades main characters, Gintama is a jack of all trades for sure, but its also a master of whatever it puts its focus on.

Gintama is primarily known as a Shounen gag manga/anime franchise but anyone who’s been following Gintama for this long can tell you, its also got tons of emotional character moments and epic moments to rival some of the best shounen series out there. Much like how One Piece can make you cry over a ship, Gintama has repeatedly brought tears to my eyes with how amazingly it develops its characters and emotional stories. 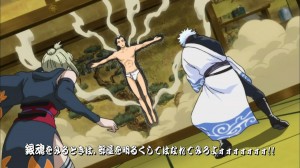 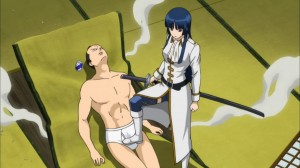 But… what’s truly amazing about Gintama is how suddenly it shifts tones from a funny, often hilarious gag manga to tear driving drama and intense action. Its been done before in this series, whenever a character’s backstory has come into focus, but this time, this story arc holds a really special meaning to anyone who’s watched Gintama from episode. Before I get into the actual episode, I’ll sing one final praise of Gintama. Despite being able to do some remarkably funny filler arcs at times, Gintama is probably the only shounen series I know that has gone on break TWICE, rather than pad out the story like One Piece does, or go on horrible fillers like Naruto or Bleach (used to).

With that said, if you haven’t been watching Gintama since it returned from its latest break, I highly implore you to drop on over to crunchyroll and watch the first “Kintama Arc” which was pretty darn amazing. And then, I’d wager you can drop straight into this arc, which is just… well, you’ll see. Now then, Spoiler warnings for my thoughts on this arc after this, so stop reading if you haven’t seen the episodes or want to.

Okaaay… So Gintama is off the whole “Best of” Re-airing episodes and drops us smack into the one storyline we’ve been waiting for. I often wondered if the series would ever get into properly explaining Gintoki’s past, and I always assumed that it wouldn’t happen until Gintama ended (the manga anyway). At first, back in perhaps the first hundred episodes, when Hideaki Sorachi-sensei was probably not as masterful at his craft as he is now, I was really concerned about how the big question was being eluded. It was kind of like how we’ll probably never see Kudo Shinichi return as an adult and how Conan will be eternally a kid.

And then, I think after the 150 episode point, I just… stopped caring. Gintama become outright hilarious, and not only that, we got some truly emotional and serious storylines. Whether it was the much beloved Benizakura arc, or whether it was the whole storyline explaining Hijikata and Okita’s complex relationship and history. And of course, more recently, we got the whole battle for the Kabuki District arc. Maaan, Gintama has been a roll ever since, and now it pulls the truly unexpected.

Gintama is finally getting into what happened in Gintoki’s past, explaining both how he failed in his rebellion and how Edo became so Amanto controlled. I won’t even begin to pretend that I expected this. I thought Gintama was probably going to put forth a hint or two in this arc, as it was pretty strong as is. 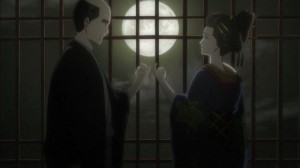 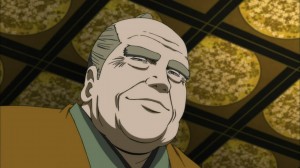 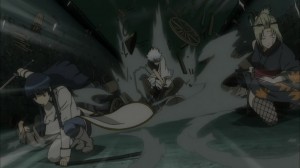 The whole story of Suzuran and the princess’s attendant “Gramps” was a story that held enough of an emotional core. Not only that, The Yoruzuya and the Mimawarigumi’s Imai Nobume teaming up with Tsukuyo to overthrow the original corrupt Shogun? The stakes needn’t have been higher, but then we got the big old whammy: 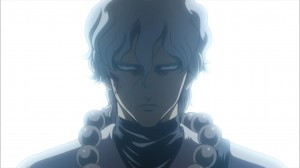 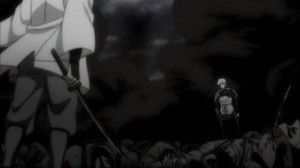 The man who I’m assuming beat Gintoki to a bloody pulp and ended his rebellion and tenure as the White Yakasha comes into the picture as the assassin and guardian of the corrupt and sadistic shogun. We also get the cliff notes of Gintoki’s backstory, and everything just falls into place. For anyone who’s been a fan of Gintama, this is perhaps the ultimate payoff suddenly being handed to us. 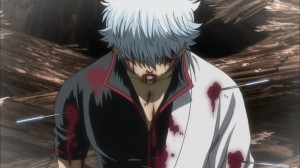 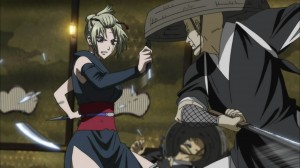 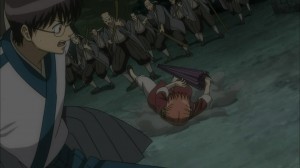 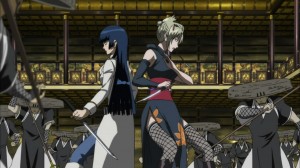 And again, Gintoki is totally out classed and outmatched by Oboro. And Gintoki’s no pushover as he’s taken on Housen The Night King in Yoshiawara who was one of the strongest Amanto. And yet, he’s left completely powerless and beaten down to near death. With Gintoki barely able to hold on, It seems that Tsukuyo and Nobume aren’t going to be able to hold off everyone for long. Not only that, Kagura and Shinpachi aren’t in the best of places either. 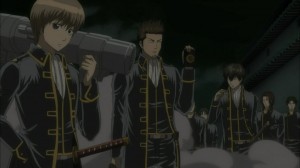 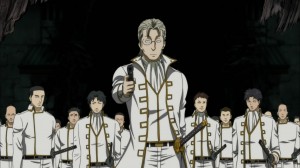 In the end, episode 259 ends with the Mimawarigumi and Shinsengumi joining the fight. I’m curious to see how far this goes, as we’ve got a big shake up or change in the works, with some of the largest players taking on the future of the country. It seems kind of odd that Katsura and Takasugi aren’t in on this whole fight, but We’re only three episodes in, and I’m really excited to see where this goes.

Honestly, the cast of characters we do have, are among my favorites. Being a huge Tsukuyo fan (Personally, I find her to be the most interesting female character in the series after Kagura XD) I’m really glad its her in this battle where Gintoki’s life is breaking apart once again. I’m a huge fan of the idea of a Tsukuyo x Gintoki pairing, which even I admit is probably furthest from reality. That, and while Gintama can truly do amazing romance drama when it wants to, I don’t think even Gintama can remove the shounen shackles of dancing around romance of its main characters. 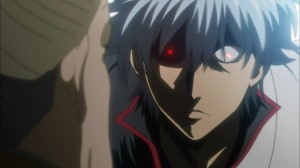 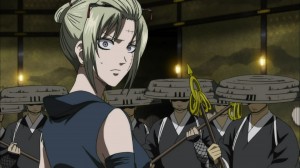 That said, this arc is just amazing. The first two episodes had the trademark Gintama humor, complete with the current Shogun “flying away” and then transitioned into the biggest emotional payoff yet.

While I originally tried to blog Gintama some time ago, it was really hard for me to actually keep up and find things to talk about. I can definitely promise that I’m going to be episode blogging Gintama through its current arc, and we’ll see what’s what after that.

If nothing else, its a great time to be a Gintama fan and an anime viewer. Here’s to the next episode of this arc, who’s first three episodes combined have acheived the “S” Grade that I’ve only given out twice in my entire blogging career. 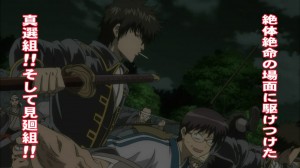 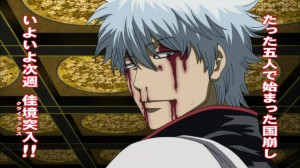 Seems like we’ll see the so called end of the rebellion? Is the arc already over? O_O. I suppose we’ll find out next week.