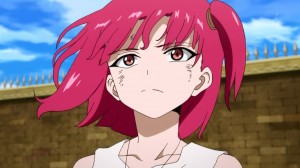 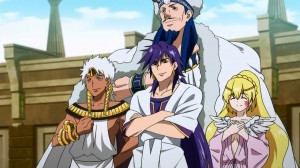 This wasn’t an episode of action, but it was definitely a highlight moment for Alibaba as a character. I was impressed both at the decision he came to and how he managed to make people listen to him. For a guy who was proposing against monarchy here, he sure proved just why he has the qualities to be a King. I think if anyone was impressed in this episode it was Sinbad. Other than Morgiana’s bold statement there wasn’t a lot backing Alibaba’s character in his eyes. But this episode showed what kind of special guy he is.

Of course it was all helped by the fact that people wanted to support him. Sabhmad was huge in just giving Alibaba this chance and others followed suit. Morgiana got him there and Sinbad helped support his case. It wasn’t even what Sinbad expected to do, but it was so well thought out that he couldn’t help but agree with it. 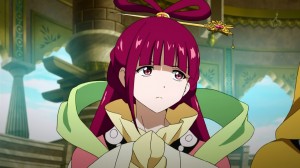 A point in his favor was Kougyoku being in support of this option. Finally this Princess gets a name so we can call her something more official. It was pretty clear that the last thing she wanted to do was get married to Abhmad. But even after that Alibaba could pick up on the fact that she wasn’t sold on a political marriage at all. An option was given to her to avoid this whole thing and she went for it.

At the same time it wasn’t like she just gave in without trying. She didn’t force the issue, but did argue points against this decision. Alibaba had to come up with options and frankly Sinbad saved the day. It was his offer to let the Republic of Balbadd join his alliance that gave Kougyoku the out. The offer for Balbadd to pay the Kou Empire what they would gain if they took over by force along with Sinbad being willing to protect Balbadd made it worth accepting this offer. A nice move on her part as well to secure Sinbad having to go visit her…I mean the Kou Empire to prove his accepting Balbadd into the Seven Seas Alliance. For someone who started off with the impression of blowing away Ugo, I have to say she has grown on me. Has an understandable quality in not just wanting to be a political piece to marry off. 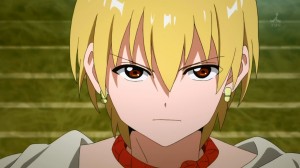 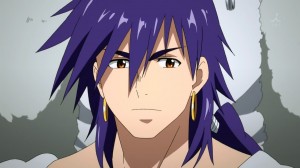 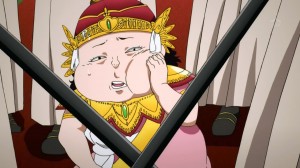 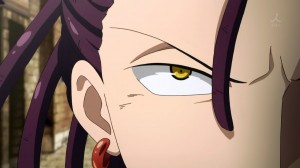 An interesting move anyways by Alibaba to go for a Republic. Honestly I thought they would have Sabhmad take over. I know he’s not the most confident, but at least his heart is in the right place. But in the end both he and Alibaba turned the job down. They both have that feeling that they don’t deserve the job in a sense. Sabhmad didn’t stop the terrible things being done in Balbadd and Alibaba’s involvement with Kassim lead to the first King’s death. Maybe it’s better for the people to stand up and take their country. Republic’s have their problems and the Banker made a good point. But in the end it’s better than sticking with a system that has lead them to this point. It’s worth trying at the very least and gives the people a sense that they are making a difference.

Of course it’s not that simple. There are forces at work and peace isn’t easy to make real. Kassim’s forces are still on the move and somehow I don’t think they are going to just stop and turn around. Kassim doesn’t seem to care about Balbadd one bit, he just wants blood. I think the same can be said for those he’s recruited to his cause. It’s not about the good of the country, it’s about making someone suffer for what they have gone through. Does Kassim’s face look like one that has the future of the country in mind? This could get rather messy.

Another question is about what is up with Aladdin and Judal? Both seem to be responding pretty strongly to the situation unfolding here. The Ruhk are just going nuts on both sides. Whether it is the dark ones fluttering to Kassim’s group or the light ones that gathered around Aladdin and created that large bird. I have no clue what is happening at this point. Though I’m sure Aladdin hasn’t died or anything. Maybe his spirit is taking action because his body isn’t in a condition to move right now? 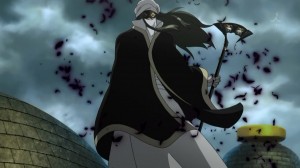 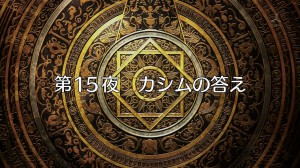 Anyways, next week should have a showdown between Alibaba and Kassim. Time for these two to settle things and let Balbadd move towards its future. Still maybe nothing will be quite as satisfying as Ahbmad finally getting punched in the face by Alibaba. That guy has sat around ruining Balbadd for too long.
Score: A