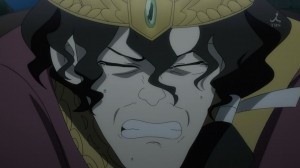 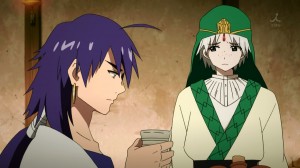 So as expected Alibaba still needed some time in order to really gather some confidence. It’s just not easy going from someone who has been living at the bottom of the world to going to the top. In a sense Alibaba has had to go through it twice. The first time living as a kid in the slums and then the second working and having to demean himself for that guy in the first episode. While getting over his past is something that Alibaba has to do it doesn’t mean that it’ll be easy.

Can’t really blame Sinbad for not having that much faith in Alibaba at the start. He doesn’t give off that air that he can or is willing to take the heavy burden onto himself. Considering the danger of the situation it’s easy to not see what is there underneath all the stress and burden. It probably would have been better from the start to believe in Morgiana and Aladdin’s views. At least Sinbad seems to have them well understood and thus it’s better to trust them. They believe in Alibaba without a doubt and know he’ll come through when the time comes for action. 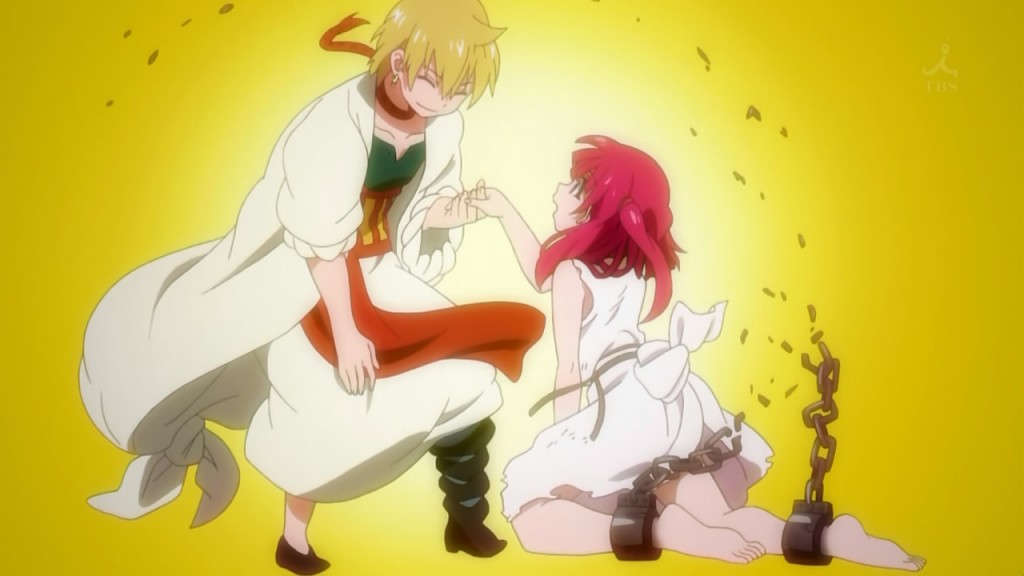 Quite the visual there XD

Have to say it really left an impression when seeing how truly Morgiana believes in Alibaba. She trusts him as someone who helped save her from spending her whole life as a slave. Certainly the criticisms as to his confidence are accurate, but there really is more to him than one can see at first glance. Plus have to say I love how Morgiana just visually makes her feelings known on subjects. The damage to anything in the area is a pretty prime example of it XD.

Still, have to say it has been nice seeing Morgiana come more and more out of her shell. Showing a lot more of her emotions on her face and expressing herself better. Managed to remind Alibaba about how much faith Aladdin has in him and that wouldn’t care about the trouble if it was for the sake of helping his friend. While no one is happy about what happened to Ugo it’s not something that Aladdin blames Alibaba for. Good on her to figure out what Alibaba was going to do going off on his own, but just too bad she couldn’t stop him from doing something so reckless. At least she’ll be quick on his pursuit and should be able to back him up. 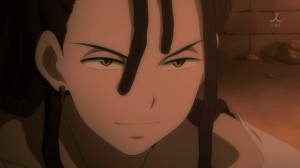 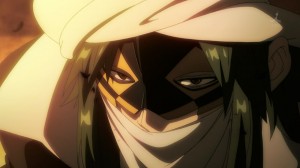 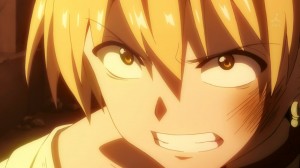 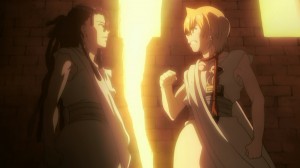 Well Kassim continues to show his true colors. Partly I think he’s an idiot who is letting himself be manipulated and I also think he’s just someone angry and wanting to see blood. I really just can’t trust anything that guy says and wish Alibaba wouldn’t be so damn loyal to him. Better to crush Kassim’s plans before things get carried away. But in the end that was Alibaba’s call.

It is clear though that there is dark dealings behind the scenes. I’d be pretty confident to say that both the weapons dealers and ‘bankers’ are all on the same side. Didn’t make the arms dealer any less suspicious that he had the dark ruhk around him. In a sense it’s brilliant. If they go ahead with this slave farm plan then the Kou Empire wins. However, if Kassim’s plans create a civil war pull through then it makes it all the easier to take over. After all if Balbadd falls apart in civil war then the Kou Empire can “save the city” by coming in with it’s army and crushing the rebels. If the King happens to get killed in the process then the Kou Empire can just take on over. Safe bet that they are working together because the schemes are similar. Get one party in debt by giving them what they appear to need, then entrap them later.

Frankly, I’m just glad that Alibaba was able to stand up to Kassim here. He’s really had trouble doubting or even disagreeing with him to this point. Finally he stood up to his own ideals and didn’t go along with that crazy civil war plan. Though to be fair it’d be hard to go along with “we’ll just throw enough bodies at them in order to win!” Let me tell Kassim that kind of strategy did not work out well for Russia in WW1. You can’t just throw a lot of bodies at a problem and expect to win the day. While Alibaba’s wish to settle this without sacrificing lives might seem naive, it’s worlds better than giving up and getting a ton of people killed. 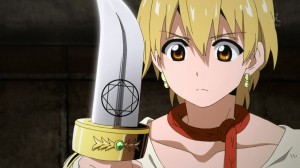 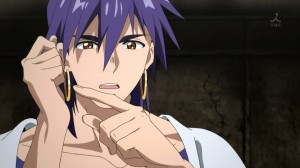 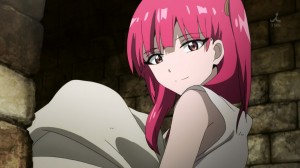 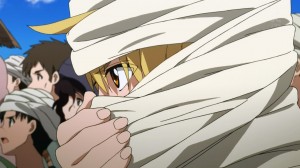 Thus came the quick bit of training for Alibaba. He really did need it. Figuring out how to use a djinn on his own wasn’t going to go too far. Might as well turn to an expert who has a great understanding of how a person can use their magoi. I wonder what kind of trick he suggested when it comes to gathering magoi in the middle of a fight? Especially since it’s a trick that frankly Hakurei would have liked to have in her conflict earlier. Well if Alibaba can get close to the great power that other Princess showed off then maybe he’ll have a shot.

I do wish he didn’t do something reckless like attacking on his own. He doesn’t need to be doing this all solo. At the very least ask for Morgiana’s help here. There’s no point getting himself killed which he will do if he fights by himself. I get that he didn’t want to betray Kassim, but come on at least use your head. Regardless he’ll get backup whether he likes it or not.

Makes me wonder what Sinbad will do. He certainly has limited fighting ability since he still hasn’t bothered to recover his metal vessels. If he can get those then he goes quickly to the most powerful person in Balbadd. I suppose planning on using his seductive abilities works too….I was just joking last time, I didn’t expect that he would actually go ahead and try to talk to the Princess to change the situation up a bit. Though I can’t deny that he would have good effect since he had a positive influence on her XD. 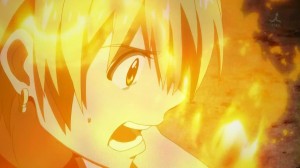 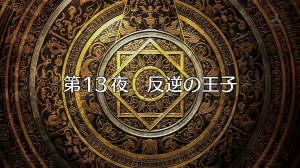 So now we have to see how this will all turn out. Will Alibaba (and eventually Morgiana) be able to hold their own? Will they get backed up by Sinbad’s group? Or will Aladdin manage to wake up and lend a hand? There are a lot of questions leading into this huge battle including at what point will Kassim get involved and make everything all the more complicated?
Score: A-