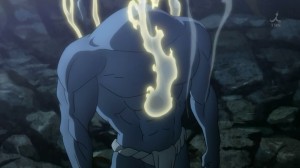 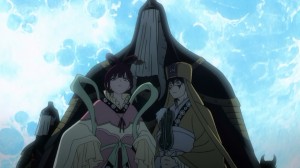 Well I must say the Kou Empire has some really weird people in it. I can’t wait to see more interactions with that country…let’s just hope our main characters can survive another meeting with them. This episode does show just how big the world is and how far Aladdin and company have to come in order to match up in it.

Not that they didn’t make an impact at all in this encounter. Ugo pretty much beat the crap out of Judal and there was going to be one heck of a showdown between Aladdin and that crazy Princess. Of course I’m pretty sure Aladdin was going to get wiped out there considering his exhaustion and how powerful that girl is. Sinbad sure picked a good moment to get involved. Though to be fair talking that girl down and talking down Judal are completely different things. 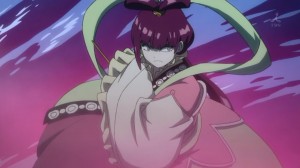 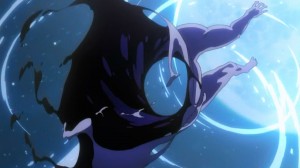 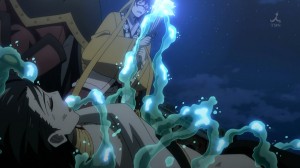 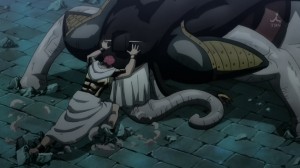 On that note it was a “holy crap” moment when Ugo got taken out. He was there….and then he had a giant hole blasted through him! I mean getting the icicle through the gut was pretty serious, but he was practically blown apart by this attack. Completely taken out of the fight and had to return to the flute. I just hope he’s alright in there. Djinns might be different kinds of creatures, but I’m pretty sure most things in the universe will have a problem if you pretty much blow a gigantic hole in them. Even more concerning is that the seal hasn’t returned. It makes you wonder what is different about Ugo than the other djinn. His relationship to Aladdin and why he was there with Aladdin is still a mystery. Though to be fair pretty much everything about Aladdin is a mystery.

Quite the entrance from the Kou Empire’s hit squad. Things pretty much went fine for them. They got Judal out of there before he was killed and didn’t really suffer injuries themselves. Things could have gotten pretty bad though with Aladdin exhausted, Ugo out of commission, and Morgiana and Alibaba getting pushed to their limits. Sinbad really did save the day this time. Luckily, the Princess got flustered and decided to pull out. I suppose being a badass dungeon conquering King will get you that kind of attention…

Still, that Princess made an impact. That was some crazy power she displayed there. Ugo was able to completely blow Judal away though that might have been partly due to him getting caught by surprise and overwhelmed in a hurry. On the other hand this girl had plenty of time to think before jumping into that fight and attacked with enough force to completely take Ugo out of the picture. Still, that doesn’t take away from the fact that she’s scary powerful and has good control over her ability. Dungeon Conquerors can be overwhelming when they are experienced and she proved it here. Hopefully they don’t have to face her in the near future. 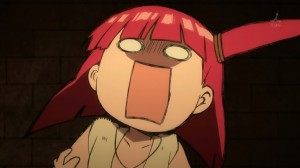 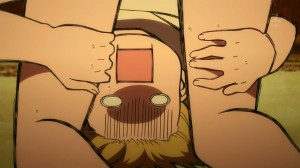 Outside of the fight I’m really feeling for Alibaba here. He’s just feeling overwhelmed and inadequate. A few months ago this guy was living in practical servitude to some jerk and now there is so much expected of him. Those expectations are on himself as well though. He looks over at Sinbad, this great King who always seems to have things under control. It’s easy to feel inadequate compared to someone that overwhelming. But, he’s just got to figure it out and have faith in himself. Aladdin believes in him and I’m sure the same can be said for Morgiana.

Well maybe before that awkward moment in this episode XD. I have to say that’s not…ok, I just don’t have the words for that scene. Remind me never to check for injuries in that manner. Shows remarkable character for Morgiana that she could actually go ahead and treat his injuries after that. Pretty good level of restrain on both sides really. Just a couple of screams in shock and a “what are you doing!?” Though I suppose if Morgiana ever fell into a cliche response then she’d kill Alibaba with the amount of strength she has. 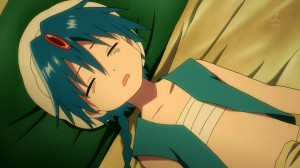 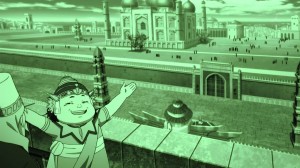 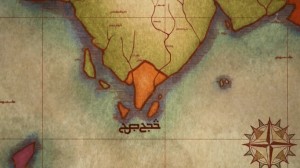 What insanity though from Aladdin to nearly kill himself trying to help Ugo. It was just insanely reckless. Of course Alibaba is right in that it shows how important Ugo is to Aladdin. He’s been his constant companion from the very beginning. He spent all that time with him before he set out on this adventure. I’m sure the feelings run deep on both sides in terms of how far they’d go to save the other. Even still, there’s no point if Aladdin kills himself in the process. But that’s Aladdin, despite that power he thinks at a very pure level. If he wants to help someone he’ll help, if he thinks something is wrong he’ll act against it. He’s someone you have to look after to make sure he doesn’t go overboard. At least they managed to stop him before it was too late, but it seems like he’ll be out of action for now.

If all that wasn’t bad enough they now have to stop Abhmad. That guy has just completely lost it. In order to keep on paying and getting money he’s going to start selling his citizens into slavery!? Does this guy have any concept of what a country is? If you start enslaving your own people you will literally have no one left. Either people will be enslaved or they will get the heck out of there. How long do the nobles think they will last if the people are gone and no one will deliver their food or populate the city? It’s just reaching a completely ludicrous level here. I suppose the point is that they aren’t thinking anymore and are just fueled by greed and desperation to keep their own happy lives secure.

Sadly we’re seeing how bad getting involved with those Bankers and the Kou Empire can be. Abhmad had no clue and helped direct Balbadd into ruin. Things have reached a horrible point and I’m not sure if Balbadd can be saved. Even if they can stop the enslavement what is the future of Balbadd being in this much debt? They’ve gotten into such a mess that it would take a miracle to get them back out of it. They might need to clear a couple dungeons to fix this mess. I suppose it shows the danger of paper money. Anyone who’s familiar with history would see the problem that comes when a currency starts losing its value and you start getting into debt problems. 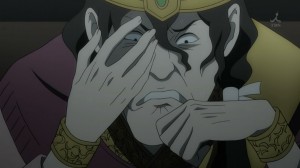 I have to say it was nice to see Sabhmad step out of the shadows. Interesting that he was actually the informant for the Fog Troupe. I can understand his reasoning though. He just doesn’t have the confident to stand up to Abhmad and the only one he could count on was Alibaba. He really does have faith in him though. He believed Alibaba could find a way to stop this terrible scheme. He was fighting his best against his own fears by coming out to see Alibaba and tell him everything.

Not surprising to see Morgiana get fired up about this. Someone who has had her life completely thrown into chaos because of slavery. She’s lived the horrors of that system and any time it comes up I expect her to want to do everything she can to stop it. The chains around her spirit have shattered and she is completely determined here. Of course her passion isn’t exactly helping Alibaba who is already stressed out enough as it is. Suddenly he’s got all this focus on him to make a decision that might turn Balbadd into a battlefield. 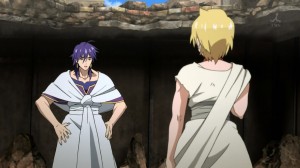 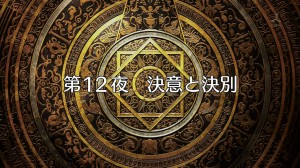 I can’t wait to see how this all turns out. Alibaba has to find the confidence to take charge and save his country. I’m sure Sinbad will help out, but just letting him lead this whole thing isn’t the best way to go about it. This is Alibaba’s homeland and he’s got to do what he can for all the people. This has gone beyond a situation where people can just move to Sinbad’s country. Think this also confirms that Kassim was full of it. They didn’t seal away the slums because of illness, but rather to silence dissent. Makes you wonder what else he lied about.
Score: A