Fans of The World God Only Knows rejoice! In the latest issue of Weekly Shounen Sunday, a third anime season for the series has been announced as green-lit for production. 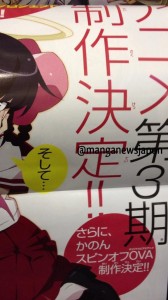 Added to that, a spin-off OVA featuring idol Nakagawa Kanon has also been announced to be in the works!

No word yet on a release date, but given how awesome the first two seasons have been, and how strong the manga is going right now, fans are in for a treat. Much like the previous two seasons, Anime Evo will be reviewing, covering and blogging the new series when it comes out.

Stay tuned for details regarding the third series!