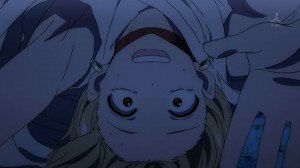 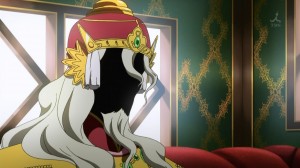 Got to love how Morgiana is the one character in the series that just gets things done. Alibaba and Aladdin are pretty well content to remain miserable without actually going and talking to each other about what is going on. Instead Morgiana pretty much says “screw it” and just brings them together. You just don’t mess with that girl.

At least we are starting to get an idea about what is going on in this country. Clearly there was a reason why the King went and found Alibaba out in the slums. He probably noticed how his legitimate child was pretty well incompetent in so many ways. So much so that finding an illegitimate child was actually worth doing. Certainly proved the King right in being much more capable and regal than the other option. 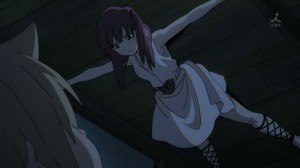 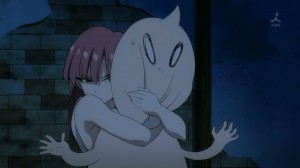 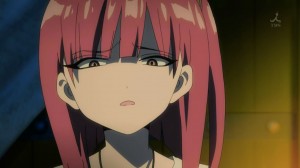 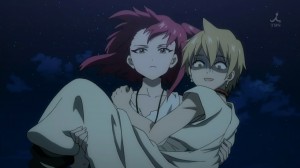 Seems likely that Alibaba either left on his own or was removed because of what happened. His actions lead to the palace getting robbed by thieves and the King passing from a probable heart attack. Even if he wasn’t blamed the guilt wouldn’t be easy to get passed. If he had just avoided going out that night or if he had just not met Kassim maybe none of that would have happened. You could see fate working in that moment.

The whole kidnapping scene was pure hilarity though. I mean first Morgiana tracks Alibaba down via scent. She sneaks around inside a den of thieves like some kind of ninja and then nearly scares Alibaba to death XD. That is one girl you really don’t want to piss off. There is only so much frustration she can take before something gets broken…I just love the expression after she crushes the ground. Just had enough of his nonsense so she scoops him off and takes him to Aladdin bridal style XD. That was just too damn funny for words. 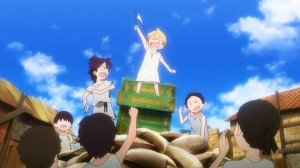 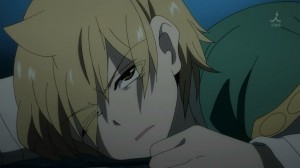 Pretty well this episode was to give Alibaba some serious backstory and start explaining what the heck he is doing here. So was right about him coming from noble heritage, but he didn’t start there. Interesting that he started out as a street kid and then was taken into the royal palace where he learned higher tier stuff. Now it’s clear how he knew what the writing in the dungeon said and how he could fight so well. Even if he only spent a few years in that royal setting the body doesn’t forget.

Of course we still aren’t sure what Alibaba is doing. I mean certainly he must feel a level of responsibility for what is going on here. If he hadn’t screwed up then he’d be sitting on the throne and the country would be fine. Instead an incompetent is on the throne and the city has fallen even further into disarray. It’s just sad what is going on there. People are starving, the rich are hoarding, and the Kou Empire is sneaking paper money everywhere they can. I can see Alibaba thinking he had to take responsibility and help fix things. His brother wouldn’t listen to him, but maybe Kassim could guilt him into helping out. 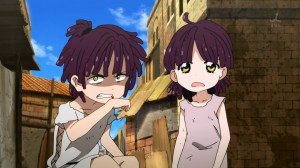 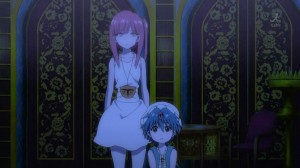 On that note, there’s a guy who has no problem forgetting his past. Alibaba’s mother takes him in, Alibaba treats him like family, and he just goes and betrays them. First throwing himself into thievery and then betraying his friend’s trust in him. All of that while he’s using excuses like parents to explain everything. Just working with a self-fulfilling prophecy. He sees himself as worthless because his father was a drunk and so that’s how he turns out. Kassim could have done all sorts of things, but he just went with thievery since he thought it suited him. I’d like to think that when he let Alibaba go he did it for the sake of making his friend’s life better, but who knows.

Still this isn’t going to solve everything. They still have to resolve this issue of Alibaba trying to fix this problem himself instead of relying on his friends. They can’t avoid this problem for much longer now that Kassim knows that Alibaba has vanished. Throw in the issue of Sinbad looking to deal with the problems here and something big will happen next week. 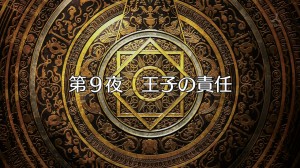 So this was pretty good in explaining Alibaba’s past. I can’t wait to see how this all works out. Nice job with the series tying in the Kou Empire’s conquering. Sometimes economics is more effective than pure military.
Score: A