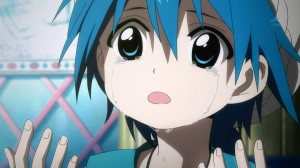 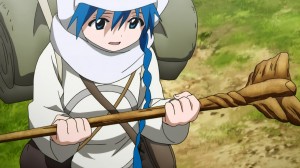 Well this episode turned out to be a lot more exciting than I had expected it to be. I mean sure, I expected some fighting and maybe Aladdin having to jump in the middle to avoid a full out war. Instead, it was a lot more than that with Baba and Hakuei playing pretty big roles in allowing things to turn out like they did. I mean let’s face it, Baba was pretty much Obi Wan with that spirit mode of hers XD. Not a bad thing when you can get more than expected out of an episode.

Still, Aladdin had a role to play in resolving all of this. However, he was the most helpful in just moving people around. That flying turban is certainly a good way to get around. Really, this episode helped Aladdin gain a better understanding of himself and his role. Dying gave Baba a better understanding of things and where Aladdin’s strength comes from. He’s supported by a wealth of power and spirit that lend him what strength can be spared. Though maybe the most important thing he gained was not about Magi, but being a part of that Kouga family. He may not have known Baba as long as the other members, but he still felt her loss. Alibaba gave him friendship, but in a sense Baba gave him a parent. I think it’s more than fitting that he takes that staff to remember the Kouga clan and Baba who taught him so much. Though in a sense she will continue to support him going forward. 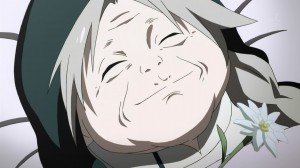 I am glad that Baba survived for a while going into this episode. I thought it’d be too weak and sudden to have her die like that in the last episode. Instead you got to see the shock and pain it had on the Kouga tribe, while at the same time letting Baba save the tribe from destruction. It’s not a surprise that they were sucked up into anger and rage. They’d been pushed so much by Ryosai’s schemes that they couldn’t just take this last shot. I’m glad that Dolge at least tried to stabilize things, but stopping a group that angry required more force.

At least Baba managed to last long enough to save her tribe and go while surrounded by family. She really was one heck of a person to endure the pain she was in while making sure she completed the work she had left to do. While the clan having to submit is painful, it’s worlds better than being destroyed. Sometimes you just have to suck it up and take the uncomfortable reality. A true leader to the very end, reminding her family one last time that staying alive is the most important thing. 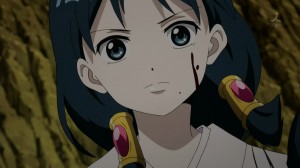 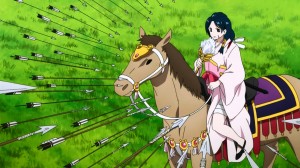 Hakuei was pretty impressive herself in this one. Even with a blade coming at her she held her ground for the sake of peace and Aladdin’s wish for the Kouga tribe to not be killed. This series really doesn’t hold a lot back sometimes. Hakuei took a pretty serious cut by the Kouga attacker and she’s not going to be walking that one off any time soon. Though in a sense it was nothing compared to what she was going to be enduring later. The girl has a lot of guts and isn’t someone you’d want to make enemies with.

Of course, that is exactly what Ryosai did. Sadly, his scheme wasn’t that unexpected. Wanting to kill off someone he didn’t like so he could gain the army. Sending an idiot like that along really shows the problem within that Empire. Though I suppose you have to give him some credit in terms of tactics. Using the least amount of soldiers to waste Hakuei’s strength and then finish the fight. Though you hate villains who rely on the fact that the good guy will use their strength to save their enemies from intentional attacks. Sound tactics, just not very commendable. What a piece of work though, challenging Hakuei to a duel at the end just to rub her naivete in her face. Glad he just got smoked by Ugo at the end there. 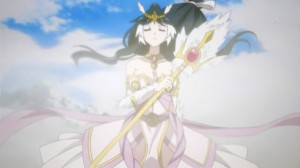 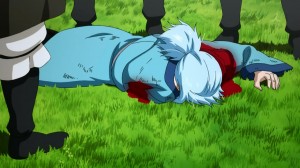 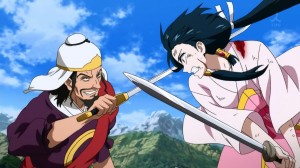 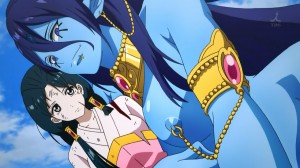 Still, Hakuei did do pretty well considering it was two people against an army. Shows an interesting ability to equip djinns and makes me interested in seeing what Alibaba might have up his sleeve. Really this just shows how powerful the items gained from a dungeon are. Long as you have charges left you can really unload on people. It didn’t work out in the end, but can see how the future trio of Aladdin, Alibaba, and Morgiana should be able to handle themselves out there.

I have to say it was shocking that Paimon wasn’t censored. In this day and age everything seems to get some stupid kind of censor so it was almost relieving to have a character not restricted like that. As to Paimon herself, she’s a pretty entertaining djinn. No issue with teasing Ugo, who remains as easily embarrassed as ever. Does seem to care quite a bit about Hakuei and gave us some important answers. There are more magi out there (though we kind of knew that) and that the djinn’s seem to choose their King representative. Guess this means that Alibaba and Hakuei might end up crossing paths sooner or later as they go along that road. 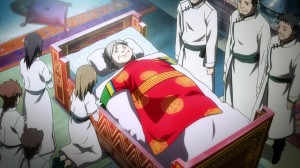 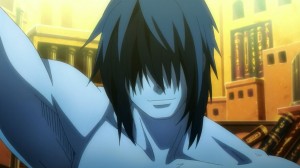 So, it seems that Aladdin is back on his journey. Both he and Alibaba are looking to meet up again though I wonder what kind of adventures they might run into before then. Seems like Morgiana is going to go along her own path and we’ll just have to wait for when these characters meet up and where they will go next.
Score: A+