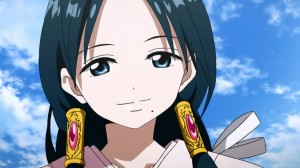 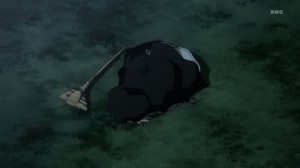 Well that is a rough way to end the episode. This also proves why sending a warmonger along with you to talk peace is usually an absolutely terrible idea. Now I can understand if the Princess had little choice and that guy was forced on her, but she has to be able to keep him in line. If Ren cannot command those around her then what’s the point of her ‘leading’ this group? It is incredibly likely that either the general with her or someone he commanded killed Chagan to trigger a war. Still, I will give the Princess some slack if next episode she does the right thing and arrests/executes the person behind this. An innocent person was murdered and that cannot be allowed to slide.

This whole situation just shows that even if the leaders of groups want peace, all it takes is one idiot to trigger something. Tensions were so high in this episode that even one wrong move might lead to the loss of many lives. Of course, the target had to be the most rational person who was working to keep the peace. Killing pretty much the parent of the tribe is the best plan in order to make anger cloud judgment. The problem being regardless that a line has to be drawn. How much are you really willing to take to avoid a war? No matter how much you would rather avoid it, there is only so much people can take. Though if they want to stay alive they will somehow need to avoid a full out conflict that they very likely can’t win here. I wish Aladdin some luck since he is about the only hope left to avoid war. 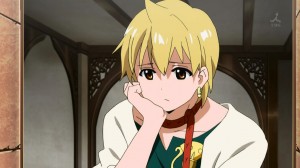 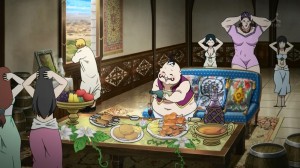 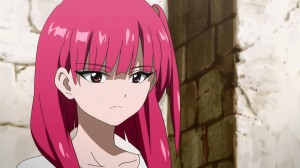 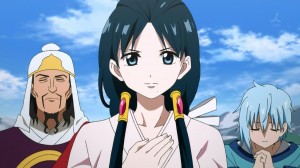 This is the problem though with trying to unite groups underneath you. You’ll have people who frankly value their independence. On the other side you may have those that would prefer war and then just taking everything that group possesses. Not as simple as simply telling everyone to work together. While I think, the Princess has many honorable intentions she does seem to be rather naive about what she is trying to accomplish here. Much as she needs, an iron will to accomplish her goals, Ren needs to be sure everyone working with her is on the same page.

At least things are going smoothly for Alibaba. He’s spending his money well and doing a lot of good. Since the slave industry is all about money, if he simply buys and frees the slaves that helps solve some problems. Of course, a lot of these people are still going to need to do similar jobs, but this time they will be actual jobs that they are paid for. In addition, those like Morgiana can at least go back to their homelands and actually have a future ahead of them. It was rather sad watching that jerk from the first episode just suck up to Alibaba like that. Really does remind you of how Alibaba himself acted in that first episode, sucking up his frustrations and putting up that creepy smile.

Good to see that Morgiana is doing alright. She does have to deal with how her life is suddenly changed and the deaths required to get her to this point. The chains have been cut, but seems like her emotions are still going to take a while to truly be freed. Considering she had to serve an abusive jerk like the previous Lord, it is not really a surprise though. At least she thinks that she is grateful to Alibaba and Aladdin XD. Of course, you know she’s going to be sticking with these guys so I’m just looking forward to seeing how that actually unfolds. 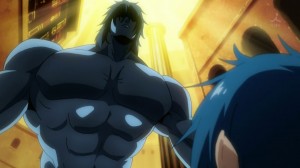 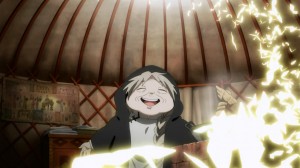 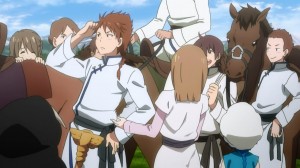 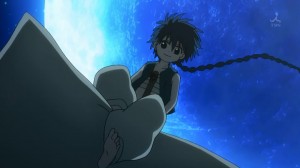 It was interesting to see some flashbacks for Aladdin to really understand how lost he felt about his past. No matter how much he would ask Ugo couldn’t give him the answers he was seeking. So now coming out into this world he’s learning about Magi and the role they play. That serves to tell him what exactly he is, but I agree with the old woman. He’s going to be defined by his relationships and those around him. Long as Aladdin has those bonds then he won’t need to be so unsettled about not knowing much about his past.

Aladdin remains a hoot though. It’s all about the breasts for that guy sometimes. He went right after the horses, getting milk from the source. I felt bad for the young horse since he was cutting in line there XD. At least he got some payback by being carried off like that before being rescued.

Overall, I liked the Yellow Fang tribe. A good group of people just trying to continue with their way of life. Of course it’s tough for a nomadic group to hang in there when an empire comes calling. Obviously they played up the romance with Dolgi and Toya and thus I hope both of them get out of the next episode in one piece. Bad enough they had to deal with the kidnapping in this episode. But really a pretty kind group that despite a bit of suspicion at the start pretty openly accepted Aladdin and gave him a sense of family. Besides Chagan was a hoot and it just sucks what happened to her. 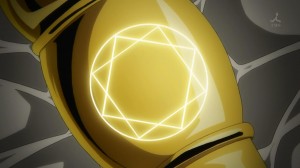 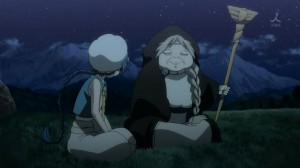 If this episode proved anything it’s that you can do everything right, but still not get rewarded. All that effort not to kill anyone in the kidnapping rescue, but war still might break out. Hope Aladdin can somehow keep things from turning into the worst case scenario next week. This was a good episode for getting some more information about Magi, Aladdin, and those light butterflies that had been fluttering around him in earlier episodes.
Score: A