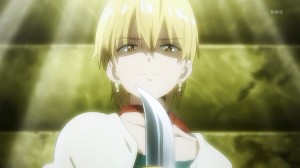 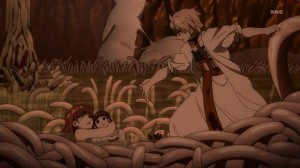 If there is one series that really managed to surprise me going into this fall season it was Magi. A lot happened in the first three episodes and it really confirmed to me that this will be a fun show to keep on following. Aladdin, Alibaba, and Morgiana are all pretty solid characters and especially I’m curious to find out more about Alibaba and where he originally came from.

When we first saw Alibaba we had a guy who was determined to reach his goal, but at the same time was willing to suck up a lot of abuse to get there. He seemed to have reasons for needing the amount of money that clearing a dungeon would give him. The first episode you were just waiting for him to stop holding himself back and take action. When he finally slugged that slaver and went down to try and help Morgiana and that kid. That really was the start for him and he kept showing off interesting skills. His ability to read Tran and use that King’s Stance to fight hints at a pretty elite background. He’s not just some random kid with a goal, but someone who had to have come from the upper class (be it royalty or just being rich). I’m not sure exactly what happened to Alibaba in the past, but it was enough to send him crashing into the ground alone and having to make his own way. 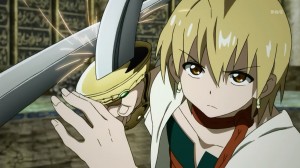 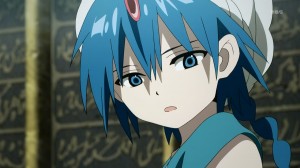 It was purely satisfying watching him trounce that Lord in episode 3. He really has incredible skills with a blade and long as he doesn’t drop his guard the guy is more than able to handle himself. Alibaba also pretty quickly realized he didn’t know much about Aladdin and also decided to share his own past when time would allow it.

Aladdin certainly is a mystery to us and even to himself. He’s known as this Magi, selector of Kings but really doesn’t have much clue about it. He simply wanted companionship and set out into the world. That crazy appetite is good for a laugh, but glad it does have some plot significance. He has to keep on eating so he can summon Ugo without being drained dry. A really pure character who looks at this world without understanding some things. Things that are just seen as natural to the people living there (like slavery), isn’t easy for him to wrap his head around. I’m sure the world and his own personal mysteries are going to keep this series moving along. 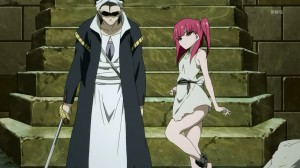 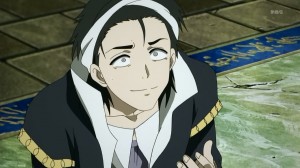 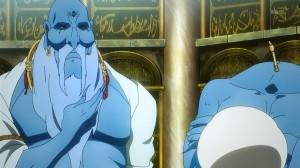 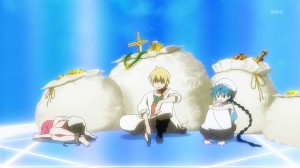 Morgiana really is a sympathetic character, who at the same time is pretty badass. A damn shame having someone that powerful and cute trapped in slavery for so many years. It wasn’t a problem with the chains on her body, but the chains holding her spirit in place. She probably saw this Lord way back before he became corrupted and a monster. The system holding her down even though with that strength she could have certainly escaped on her own any time. I’ve got to give Goltas credit for helping to wake Morgiana up and get her to escape from the dungeon. There is still a big future ahead of her and she still managed to hold herself back long enough from killing Alibaba. While she probably would have done it eventually, Morgiana kept her hands clean. She’ll be some valuable muscle when eventually she joins up with Aladdin and Alibaba.

If those three are going to be going around clearing dungeons, I hope the rest stay as interesting as the first one was. That thing was full of traps, monsters, and tests. These episodes just proved that you can’t simply waltz into these things without a high level of skill. That stupid lord walked in with a huge number of slaves, but they soon were almost completely annihilated. You can’t simply throw bodies at a problem and hope for the best. Of course his lack of care for lives was part of the problem. When he was just going and stabbing Goltas for no reason….that was just frustrating to say the least. But anyways, these dungeons really do seem to require you to be something pretty special. It may simply be expected that you have a magi with you while trying to clear these things since otherwise survival would be difficult. Though in the end it was just as much Alibaba’s knowledge that saved the day.

One other mystery is that of the Djinns. I mean we already got to see Ugo inside and outside of the flute who was pretty impressive. But Amon shows that there are some different ones out there and they seem to represent different things. A pretty good guy that quickly helped Aladdin and company escape before the dungeon collapsed because of the actions of the other magi. I’m not too surprised that more than one is out there, but seems like that guy probably has a better grip on what is going on than Aladdin. 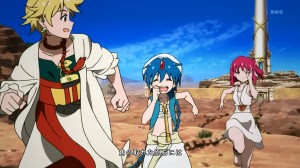 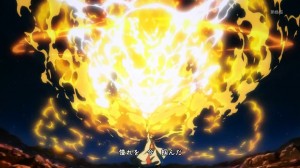 This was a pretty fun OP. I don’t really mind watching it every week. Just one of those OPs that before you know it the song is over and the episode is about to begin. Nothing too out of the ordinary with a focus on the leads and showing off their abilities. Along with them we saw quite a few other characters who are probably going to be fairly prominent as the show goes along. The song itself was full of energy and was enjoyable to listen to. All in all a pretty good way to start off any episode. 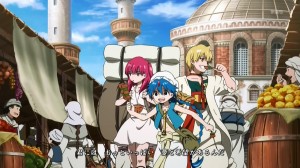 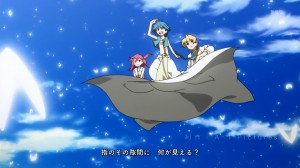 The ED is in my opinion just as good as the OP. While the visuals might be a series of still images, it just seems to work well in my mind. The song is great and I like how it starts up in the last few moments of the episode before transitioning into the ED. The great song just seems to combine well with the visuals to leave me excited for what the next episode is going to bring. Nice to have a series where I can watch from start to finish with no complaints. 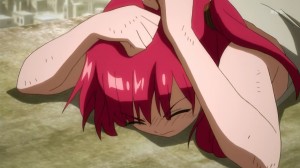 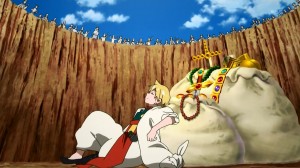 So that makes Magi the second fall season I’m going to be covering. Now that I’ve made that call can get to talking about one episode each week. I just have a feeling that Magi is going to be plenty enjoyable and one that I’ll enjoy talking about.
Score: A