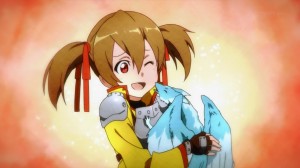 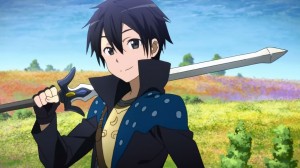 Another episode of foundation building for Sword Art Online and this week the focus turned to Kirito meeting up with beast tamer Silica. I thought overall this was a really well done episode. While it is another episode that has the whole story contained within one episode I still think that’s the right approach to make while building foundations. If we took 2 episodes for each story here we’d just be starting Sachi’s story. In this case I think the decision was a good one since I’m not sure how much they could really expand on Silica’s story. Maybe could have spread more action into a couple episodes, but don’t think the story itself would be advanced. Instead get the story development right in a condensed state and are able to move on ahead.

I have to say that Kirito is doing a damn good job leveling up. He’s managing to thrive as a solo player, but also as a person who doesn’t turn his back on those in need. He took time out of his schedule where he could be grinding at the front lines to come and help out that poor guild leader and Silica. I mean damn the guy is level 78 in episode 4 XD. By the time the story really gets going level’s really aren’t going to be the important thing, but probably skill selection. Unless of course Sword Art Online has some infinite level cap then it could just keep on going indefinitely. 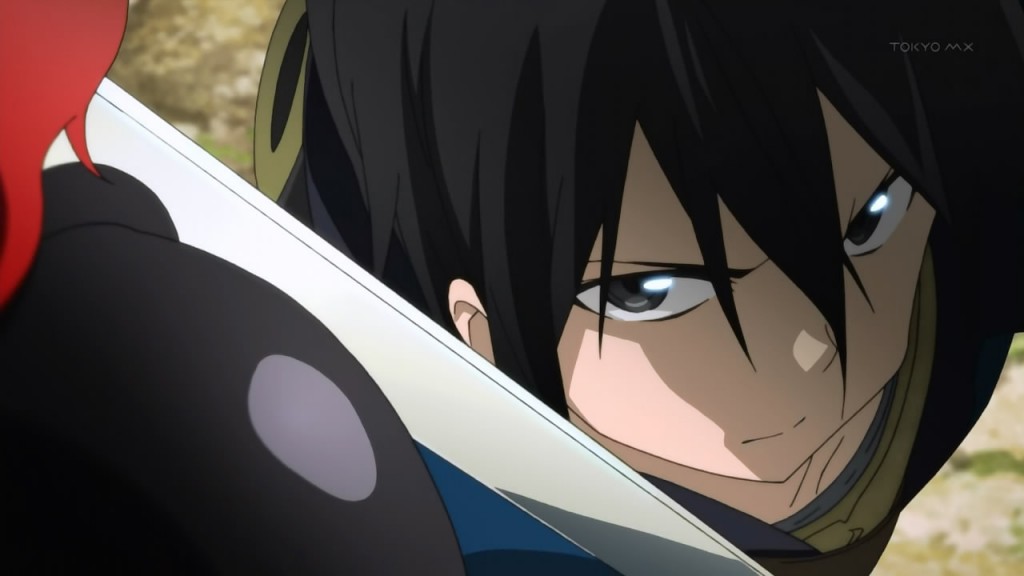 Does anyone seriously want to mess with this guy?

Maybe my favorite part was Kirito just saying pretty much saying “you guys can’t even scratch me.” It makes sense for anyone, but especially a solo player to focus on a battle healing skill that can regenerate health as he goes and lets him focus on fighting and not racing through menus for healing items. 600 health points every 10 seconds isn’t shabby, enough to make a difference in a close fight and enough to make him invincible against lower level opponents. Besides Kirito was just damn badass in this episode near the end. Speeding right at the leader and reinforcing just how out of his league they all are. Did get a chuckle out of his spurs spinning even after he stopped though XD.

Goes to show how intense Kirito has become after that Sachi incident. Getting strong enough that he can look out for those who he may temporarily travel with. I wasn’t surprised he had that crystal prepared for Silica. He’d rather have them fail than seeing another person die in front of him. Even the monsters can’t really hurt him so he’d never be at risk, but it’s not the same for someone like Silica. Seems like he’s also become more forceful with his opinions to make sure he isn’t pulled along like he was with the Black Cats. If he sees something that looks suspicious he’ll be sure to say “no, we’re not going in.” But at the same time it’s still Kirito. While it’s true that helping out Silica went alongside his goals, it’s not like he would have left her if they didn’t. Those criminals weren’t going anywhere and he’d still be able to track them down after. Just in this case he could take care of two problems at once and it was pretty convenient. 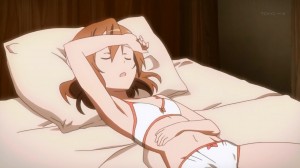 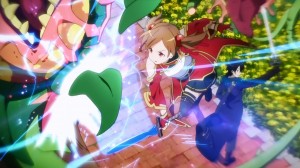 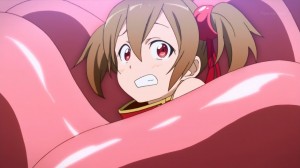 Will say it’s nice to meet a new girl and not have her die. Thanks to Kirito learning from past failures he made sure to have her as well equipped as he could and with an escape option if things got dicey. Silica is definitely one of those girls who is designed for the reaction “damn she’s cute.” I certainly thought she was a cute character and pretty likable. Really took the lose of Pina hard and didn’t try to blame others for what happened. She got angry at herself and was just grateful for Kirito’s help. Of course also had some lighthearted embarrassment at numerous points. I saw more blushes from Silica in this episode than in the previous 3 combined. Though to be fair after this much time these more human reactions are bound to happen as people really feel a part of the world.

Silica just felt like a really honest kind of character. Whether it’s on her face or out of her mouth she’s not holding back on you. Not to mention someone that has managed to keep that kind of personality despite the terrors and dangers of that world. Found enough courage to go out there in that world and take her chances. Though clearly has struggled to find the right guild for herself since too many have been focusing on her appearance and not taking her seriously as a person. On that note hopefully she finds a good group to run with so she doesn’t get caught up in a situation like this again.

I can get behind Silica clearly falling for Kirito there. Though thanks to him saying she reminded him of his little sister maybe Silica put herself into that little sister role. Regardless this was someone who wasn’t treating her like a mascot, wasn’t insulting and was actively trying to help her when he didn’t have to. I just found her to be a pretty entertaining character. Sure maybe a bit too focused on modesty when her life can be in danger (though at the same time Kirito said the first one was weak so she really wasn’t in much danger), but otherwise she was a nice addition to the series. Besides Kirito was also not taking things seriously with half covering his eyes though still looking while Silica was in that predicament. Silica was also used a bit for the sake of fanservice with that bedroom scene.

Think that Silica’s attachment to Pina was pretty understandable. They’ve been trapped in that world for a little over a year if I’ve followed the dates properly. After a year of not experiencing with anything other than that game world you’re going to get attached to the things in that world. The monsters in that world will kill you if given the chance. Makes sense for beast tamers to treat their familiars in this game like pets or family. I’m sure many who have had pets die would know how painful that loss is. Silica really was in no state to fight back at that point. Pina was Silica’s most loyal ally that was even willing to take a critical hit to protect her. I kind of wonder about the AI in this game. If they have the technology to make the world of SAO then who knows how advanced the creatures might be in behavior. In the end Pina was someone so important to Silica that she was willing to go through all this to save it. It’s a good thing Kirito was there when needed. 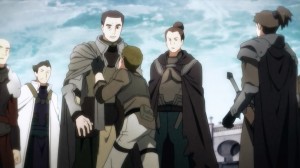 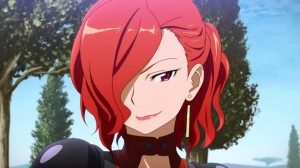 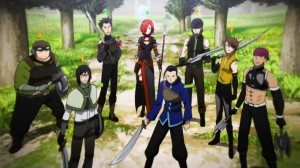 Maybe the most disturbing thing from this episode was the existence of orange guilds. Players who go around robbing others and those who go around outright killing people. I wasn’t really surprised to see those player killers existing since it seemed probable. Think they could be broken down into a few types. Those that are just evil and now that they can kill seemingly without consequence they will. Those who try to rationalize their actions by saying that there is no proof that people really die when they are killed in SAO. Then you have those who are just insane and have probably snapped under the stress of this situation. Sad that some would take that possibility that people don’t die and use it to rationalize their actions. If they really believed what they were saying they’d just kill themselves and get out. Though I suppose some would stay for the fun since where else can you get people to realistically respond to being mugged and killed inside a game?

Whatever type of people Rosalia’s group is made of, they are the kind of people who can actually run up and attack someone that looks like a regular person. The lack of blood may liberate some people, but it still takes a certain kind of person to actually attack someone that looks human. Just shows why it is so important to stay at a high level though. People like that will go around robbing and killing innocent people because they can. Those players that stayed in town for too long and fell way behind are now more at risk from people like that then the monsters. It’s good that there is a way to put these people into in-game prisons so they can’t hurt others. Otherwise the players would be left with the morally questionable decision to kill them or let them be. There is still the option to kill these people who have made others suffer so much, but at least prisons exist to give alternatives. Gives a peek at the moral system that is forming within that game as the players have to deal with questions like what to do with criminals. No longer can people just let it be if some are playing the villain, now lives are literally at stake and players themselves have to be the police. 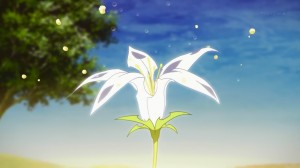 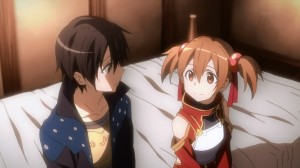 In the end I think this episode did a lot. Shows Kirito’s continued development, builds the foundation of the seris up some more, introduces a character from the OP in Silica, and shows off the dangerous elements that exist in that world. While I’m eager to see the series stabilize and not have to jump around too much, for now I’m fine with it. Hopefully we see Silica again though may be safer for her not to appear with the risks involved in this series.
Score: A-