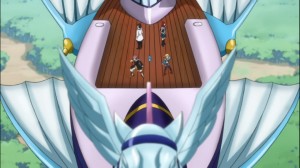 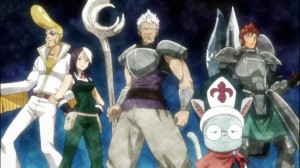 While its definitely true that things are starting to look up for this filler arc that we’ve been saddled with, its also true that the improvement is minimal at best. While the setup and overall plot seems to definitely have gotten a face lift, the dialogue and more importantly, the character portrayals are bad to the point of jarring. A lot of this filler seems to scream “delay time” as much as possible, and unlike what Fairy Tail is generally, it seems to be artificially slowing time down.

I think one of Fairy Tail’s strengths is how quick the pace is, particularly in terms of battles. Unlike Dragon Ball Z, Bleach or Naruto, the battles in Fairy Tail’s manga adapted parts are always over within an episode, maybe two at the max. Whether its due to budget or just the directing style, it definitely keeps things moving at a brisk, swift pace. It is, therefore, extremely painful when Fairy Tail throws in battles that are only meant to delay the plot or even more jarringly, use dialogue to reiterate the same thing several times in an effort to finish the episode. 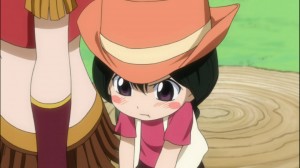 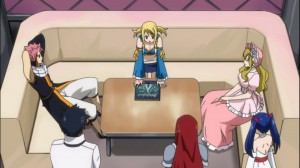 The scene that really rubbed me the wrong way, was in the last quarter of the episode. Its around the time that Lucy and Al and Bisca’s daughter both realize that the Clock Parts weren’t meant to be collected. This is precceeded by everyone going: “Hurr? No Clock Parts collection?” followed by “Really? Is that what the villains were doing?” to “No seriously? REALLY?” and finally:  “People over think stuff, no worries!”. 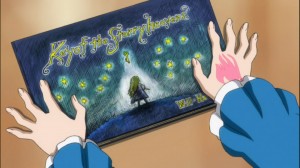 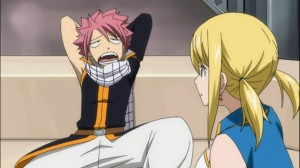 I don’t usually “face-palm” while watching anime, but this was one time that truly merited it happening. Whats sad, is that, much like episoden 139, I can see the anime  writers trying to copy the source manga, and failing miserably. Yes, generally Natsu and the rest would say something simple to make Lucy feel better, BUT it would hardly sound as stupid.

Again, to add insult to injury, all the jokes in the episode are very very predictable, and they feel like that one friend who’s about to try that same routine that he’s been doing forever, that no one laughs at. You watch in horror as the guy gets up and tries the same routine, embarrassing himself. Its sad that that guy is Fairy Tail these days. 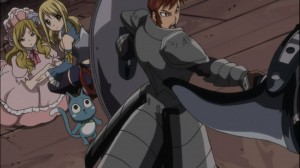 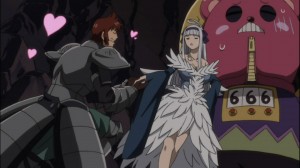 Now… While there’s a lot of bad stuff to say about the continually bad writing for the dialogue and pacing, what is good is the idea and core concept of the second act of this arc. We have a revived oracion seis, that unlike its old self, is actually fairly powerful and strong, not rely on trickery or illusion, but rather on raw power.

And much to my joy, unlike the Legion, their powers aren’t designed to specifically nullify Fairy Tail’s. The idea is quite clever actually. Remember all those powers that Oracion Seis were supposed to have but were using some form of magic to acheive? Well they actually have those powers now. 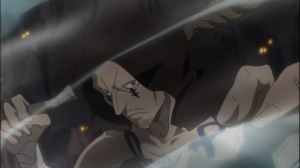 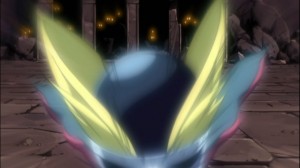 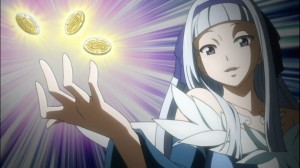 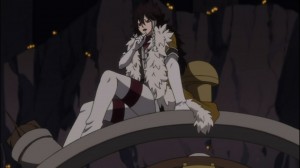 Racer for example, is actually friggin fast instead of using slow magic to slow everyone else around him. Cobra can actually turn sound AGAINST his opponents. Midnight is back, this time as the leader, except he calls himself Brain II (Good God… Anime writers… seriously?). Added to that, we have Angel, who now has some kind of weird Angel magic that can obliterate everyone. Even Erigor has matured in a believable way, having now the power to command storms, not just wind. 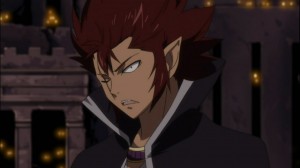 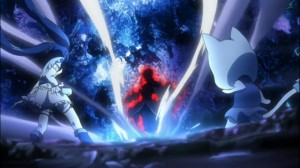 The new Oracion Seis is powerful, but they’ve gone on to enhance and build ontop of the base that the manga setup, which is why they work quite nicely.And you know, in the grand scheme of things, it all makes sense.

Again, while the dialogue, naming sense and pacing continue to trouble this filler arc, I think things are starting to get better. Whether they continue to get better, or whether Fairy Tail will continue to meander and squander this rather good idea, is really up in the air at this point.

Either way, I’m also back from my long and rather unintended vacation, so its nice to get back into the swing of reviewing Fairy Tail every week. 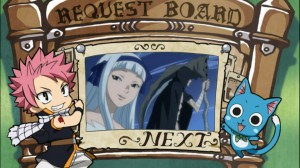 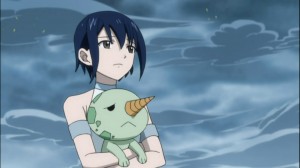 Seems like we’re going to get into some Oracion Seis stuff next week. Also what is the deal with that chick with the Green Plue? See ya all next week! XD