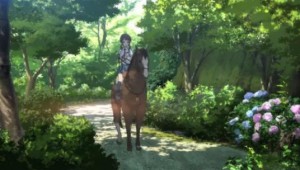 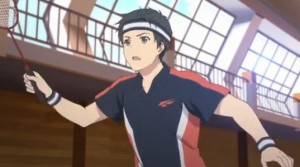 A girl who has given up on singing, a girl who won’t give up singing, a girl who tries to help out everyone, a boy who plays badminton by himself, and a boy who just transferred from Austria; these are our main characters in TARI TARI. I would say this feels like a cross between K-On! (for its music club aspect) and possibly Hanasaku Iroha (with its slice-of-life aspect). I find it will be a nice anime to relax to but it’s definitely not slow enough to get bored or sleepy. This is definitely one I will be following weekly.

Albeit the story isn’t all that original, I think the characters are what drew me in. Character types are pretty important in slice-of-life since many, if not all, of that kind of genre are character-driven. I was happy to find out the characters were actually interesting and left me wanting to find out more about them. The transfer student from Austria has to be my favorite though! His excessive politeness and awkward interactions were super cute! It’s also refreshing to have a student transferring from somewhere that is not the United States or England. I also find Taichi to be impressive. I mean, to be able to play badminton by yourself is pretty amazing XD 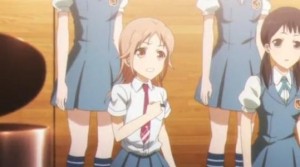 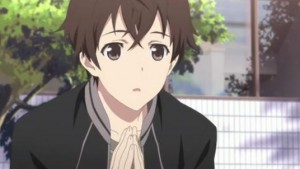 As for the girls, Wakana is the most secretive of all the characters. We know that her mother passed away but we don’t know what caused her to stop with music. She also has a good relationship with her homeroom teacher which I’m wondering how that came to be. And due to the circumstances, Konatsu has left the choir and decided to form her own club. She seems to be the most passionate about acting on what she loves. She is working hard to become a better singer by performing out in the streetl That passion has also dragged her friend Sawa to also join. Sawa dresses pretty fashionable which makes her stand out when she’s out with Konatsu.

Unfortunately, although Konatsu was able to get Sawa to join the club, it’ll be a lot harder to convince Wakana to join. I wonder if seeing Konatsu’s street performance will have a positive effect on Wakana. There’s also Konatsu’s brother Makoto who was threatened to join her choir club. I don’t know if he will actually become a member, but we’ll have to wait to see. 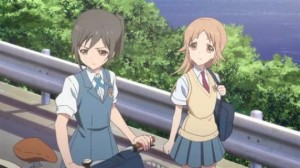 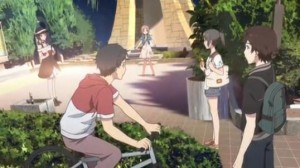 So far, this is a great anime that I’ll hope to see more of! With it being only 13 episodes long, I hope P.A. Works will focus on the story and pacing and not leave any room for yawns.

By the way, did anyone catch what song the choir was singing? It was the True Tears opening “Reflectia” by eufonius. A very nice choice; I’ve loved that song since I saw True Tears for the first time. Still trying to play it on the piano! T_T

Warning: Use of undefined constant user_description - assumed 'user_description' (this will throw an Error in a future version of PHP) in /home/animeevo/public_html/wp-content/themes/aev5theme/single.php on line 60