So, I load up Kingdom episode 1. It didn’t seem like it was going to be my cup of tea but I said “Let’s try something new!” I pressed play and I noticed something odd… I thought it was just me… then the camera shifted to Shin and I was like O_O. I had to pull up a summary just to make sure I was watching the right anime. I had read a while back that it had some cg but I thought it was like for trivial things like buildings or difficult things to animate, not for the entire episode.

But, enough of the bashing. I’m not going to complain about the cg this entire post. But before I completely move away from the elephant, there are times when the cg actually looks good. Especially in the close ups, there are times I can’t tell whether cg was used or not. I think this cg thing would have worked better if they didn’t switch to traditional animation periodically. If the entire show was cg, then the viewers could just probably get used to it. It would have been nice for the anime opening to choose one or the other as well. I’ll just pretend I’m watching the animation from a game… that should help. Oh, I almost forgot, the backgrounds are really nice! I was so tempted to take screenshots of the backgrounds but I figured it was probably too boring XD

The two main boys Shin and Hyou are voiced by amazing seiyuus. Shin is brought to life by Morita Masakazu and Hyou by Jun Fukuyama (my favorite <3). Studio Pierrot must have felt bad for ending Morita’s role as Ichigo and thus stuck him into here XD Okay, bad joke… Both seiyuus do a fantastic job as usual. It’s unfortunate that the animation is not on par with the voices; the body language doesn’t seem to coincide with what’s being spoken sometimes and it makes the exchange a little odd. But when the cg stops, everything is great : )

As for the characters themselves, both Shin and Hyou were a nice pair. They were friends who shared something like a brotherly bond. What surprised me the most, were the masters that the pair belonged to. I honestly expected them to be indifferent to their slave’s terrible fate but they were actually so upset that, along with Shin, they wanted revenge for what was done to Hyou. Well, it was mostly the son (among the group of masters) who felt so strongly about Hyou. Props to the little boy for standing up for Hyou  even when that scary, scary  man was there.

Sorry, I can’t help but bring back the animation. Honestly, the cg detracts from the quality of the story. The story is not bad at all; the cg is. In like a sentence, here’s the first episode: Hyou and Shin were best of friends and slaves and were together until some royal official told Hyou to work at the palace but some time passes and then Hyou comes back about to die but not until he tells Shin to follow his map and Shin goes to this shack after beating up tons of outlaws and finds Hyou there but it can’t be him because he can’t be alive!  (I promise I’ll give a better summary in the other episode reviews XD ) So… the story is quite interesting. It’s a shame that the only time the show is done justice is when the cg stops.

The bad guys in the story, which seems to be one of the princes and his minions, are quite violent which I guess isn’t totally out of place. The prince is the one who began the uprising in the palace causing the whole mess-up which Hyou had to pay with his life for. From the end of the episode, it looks like Hyou was chosen to go to the palace in the first place because he happened to be an exact replica of the other prince. I’m sure this will cause a lot of trouble on Shin’s part in accepting the prince, but because he looks so much like Hyou, Shin may just go ahead and go along with the prince. 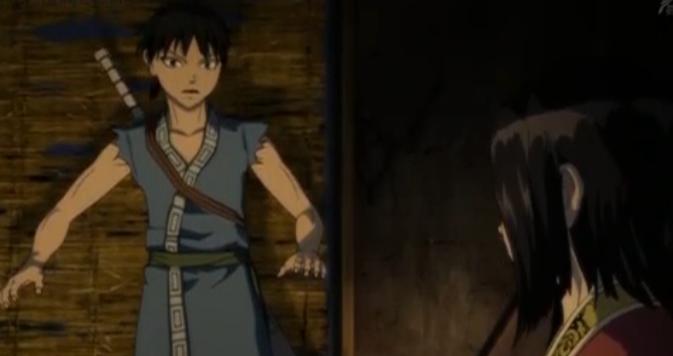 Again, I apologize for the post dealing a lot with the cg. It’s just my first impression of the anime and you know how first impressions stick. Although, some things can be changed and done away with, Kingdom is not terrible. The story might be interesting enough for me to stay so I’ll probably be sticking around to watch more. I just need to think I’m watching a game’s animation. As for blogging, I’m not quite sure about that yet since I have a bad feeling I’ll attack the cg every time XD