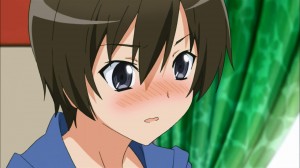 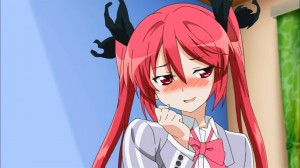 If there is any show from this season that is full of random moments and a ton of references it is Haiyore! Nyaruko-san. Sometimes it feels like this series or at least Nyarlko are running on pure sugar. The series is just full of energy and doesn’t spend much time relaxing. Can sympathize with the male lead Mahiro who actually is in the middle of these events and surrounded by these aliens.

Nyarlko really defines the series with her extreme energy and being incredibly cheerful. Whether she is hitting on Mahiro or massacring monsters she is pretty positive about the whole thing. Maybe one of the more disturbing things is seeing how she dispatches her opponents. Both she and Kuko use what they call Space CQC (close quarters combat) to pretty much kill everything in their path. Of course a lot of the things they use don’t relate to the common sense idea of close quarters combat. We’re talking flying funnels that shoot beams, grenades, crowbars, chainsaws and power suits. At least they explained it with a quote from some textbook they learned from that pretty much stated that anything one believes to be Space CQC is Space CQC no matter what someone else thinks. This series can just get pretty brutal when it comes to fights though. The first episode had Nyarlko punching through one of the monsters attacking Mahiro. After that came some pretty brutal attacks that are so one-sided that you’d think she was the villain of the series and not the heroine. 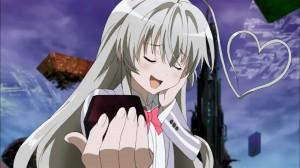 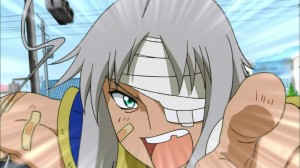 Of course the series really is about getting laughs out of people. Just watching Nyarlko make her advances on Mahiro is pretty entertaining since she really does go overboard. The same can be said when Kuko is making her yuri advances on Nyarlko. Mahiro usually manages to diffuse things before they go too far thanks to the power of stabbing Nyarlko with a fork. Suppose it shows how much she likes him to shrug off that kind of thing which probably doesn’t hurt someone like her much. Just good times like having Nyarlko hand a small box which will help save Mahiro but first calling it an engagement ring, leading to him stomp on it until she reveals its actual purpose. The series just enjoys going over the top whether it’s Mahiro’s reactions or just Nyarlko being Nyarlko. 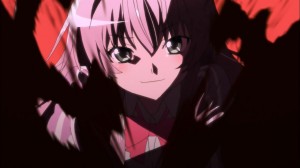 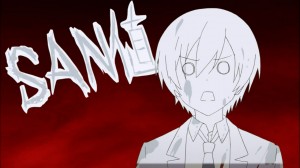 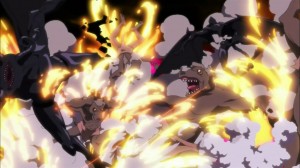 The characters definitely drive the series. Of course Nyarlko takes on the heavy role of the series since she brings so much energy to it. She’s the one initiating the advances on Mahiro and taking charge whenever a fight turns up. Definitely willing to do whatever it takes for what she wants considering she took the mission to guard Mahrio because she felt he was in her strike zone XD. Mahiro is a pretty average presence since without Nyarlko to drive him up a wall he probably wouldn’t stand out too much. But thanks to her he can shine as more of a straight man to all the comedy. Though it’s not like he’s a rock since he’ll show a rare softer side when it is needed and watching Nyarlko massacre her opponents does drain the blood from his face. He’s probably only able to retain his sanity by pretending he can’t see or hear anything. Probably also has to ignore that Nyarlko could take on a much more terrifying form compared to a cute girl if she wanted to. Having her look normal just helps his sanity from being completely destroyed.

The series really does make a lot of references to various series and quotes. Probably the easiest to spot was the ones from One Piece. It works pretty well with the comedy, though I don’t pretend to catch a ton of the references that the series throws around. Long as I can pick up a few and get some laughs from them that’s just fine.

The series is solid enough visually. The characters look fine and they manage to have some fun with the action scenes as well. I liked the music well enough too especially what they use for the action scenes. Though sometimes I can forget about that with how brutal Nyarlko can be on her enemies. 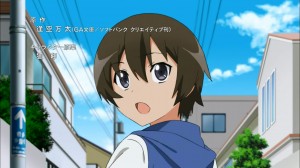 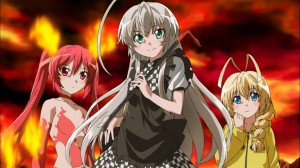 The OP is certainly as active as the series is. The vocals being handled by the main characters brings more of a connection to the series I think. It does a solid job at showing who the major characters are and giving a feel for their personalities. It doesn’t forget either to remind people that the series will have its share of action. It’s not an OP that blew me away or anything, but I think it was good enough.

ED [Zutto Be with you] by RAMM ni Haiyoru Nyaruko-san: (B+) 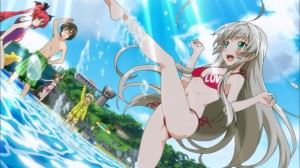 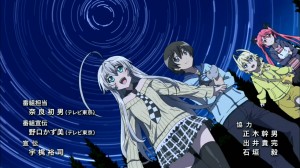 The ED is definitely a softer song that brings you down after a pretty crazy episode (which most of them are). It does reflect how much effort Nyarlko puts into trying to get Mahiro’s attention. Whether its just clinging to him or trying to appeal in different ways. The ED reflects how he isn’t unaffected by her advances, just not good at responding to them. He’s certainly going to blush seeing her in a swimsuit, just expect him to go a bit tsundere if she approaches him. The song was pretty good and I felt fit nicely with the pretty straight forward still images. A pretty nice ED that I like a bit more than the OP, but both are pretty decent in my mind. 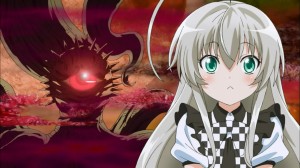 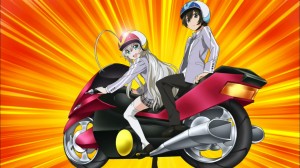 Overall I think this is a pretty entertaining series. Of course how much people will enjoy would vary. If someone can’t pick out any of the references it might feel a bit too random and depends if the comedy works for them as well. Plus there is that odd clash between the laughs and seeing Nyarlko beat some monster to death with a rock…I plan to keep on watching though since it’s pretty entertaining to watch all the characters interact.