Guilty Crown seemed like it would be right up our alley at first.  The combination of the animation, the badass mechas, and a plot involving some sort of apocalyptic virus that could only be stopped by our reluctant hero was too amazing to pass up.  At first, we were sure that this would be the show of the season but quickly took back our declaration.  Though it was a good show, it didn’t live up the expectations that had been created due to the extreme hype and anticipation of the show. 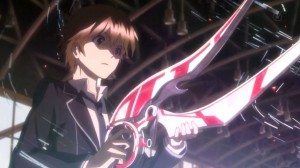 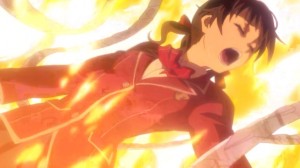 Guilty Crown is the action/adventure tale of a high school student named Ouma Shu, who is unexpectedly drawn into a fight for the world’s survival.  He meets internet idol Inori, who turns out to be part of the rebel group called Undertakers, who are fighting against the government unit GHQ.  Though reluctant at first, Shu ends up assisting the Undertakers with their mission and learns a great deal about his past and his role in the whole thing in the process.

At first glance, the one thing you notice immediately is the animation quality.  Everything is superbly animated; everything from the characters to the backgrounds and items they interact with to the epic fight scenes that happen nearly every episode.  It’s quite clear that they pulled out all the stops on the animation quality and that is one thing that we’re thankful for.  Everything is flawlessly animated though it doesn’t distract us enough to keep us from noticing the pitfalls in the character’s development.

The characters are all incredibly interesting at first, but soon enough you’re looking for more of a development as the plot progresses and you just…don’t get it.  Shu, as the reluctant hero, is wary of what’s going on around him at first (which is expected of him).  However, as he gets further and further into the mystery surrounding his family, himself and the apocalyptic virus, he doesn’t seem to develop in a way that we hoped he would.  One episode he’s incredibly unsure of himself and then the next he’s so focused on what’s going on around him and determined to accomplish whatever his objective is.  Just when you hope that he’s finally come to terms with his powers and what his lot in life is, he regresses back to being a wishy-washy teenager.

On one hand, we can understand why this happens – we’re pretty sure that anyone in Shu’s situation would have wavering confidence from time to time – but after he essentially vows to become King of Tokyo and remove GHQ from their position of power, he only ends up putting on a cold mask in front of others but is still the wavering, indecisive Shu that we’ve see throughout the series.  In contrast to Shu’s varying amount of development as a character, Inori doesn’t seem to develop much at all.  Throughout most of the series she’s the same complacent, non-emotive character.  It’s only when we learn the truth behind Inori’s origins and why she’s alive to begin with does she finally show some more emotion and a bit of development.  One thing is certain though; her dedication and love for Shu were the only things that redeemed her character.  The rest of the cast had very minimal development, but considering they didn’t have a huge role in the overall plot, that was somewhat expected. 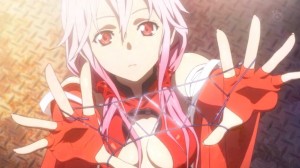 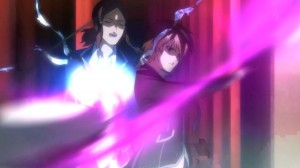 Poor character development aside, the plot was fairly decent.  It initially starts off with Gai introducing Shu to the Undertakers and Shu receiving the King’s Mark through a happy accident.  It’s during this first half of the show that we learn about GHQ, their intentions, what led up to GHQ taking over Japan in a martial law of sorts, and very minor background stories for Shu and a few other characters.  A lot of the fights in this first half set up everything, from Shu realizing that he’s a natural with his power over Voids and learning the skills he needs to in order to survive during battle to the realization that GHQ’s ultimate goal was to reawaken Shu’s older sister Mana who initially started the apocalypse.

While the first half left us somewhat breathless with anticipation for what would happen in the second half of the show, we weren’t quite as breathless at the conclusion of the show.  Though the second half of the show did give us an incredible amount of back story on characters – such as how Gai came to become leader of the Undertakers and his connection to Shu – but we were also thrown for a loop several times.  From Shu suffering from a mental breakdown and imposing his own martial law among his fellow students during a government induced lock-down to Gai being resurrected by an unknown organization in order to claim his right as King and start the apocalypse alongside a fully awakened Mana, it was a whirlwind of events that didn’t always seem cohesive.  Despite this, the ending was satisfactory and the story telling wasn’t so terrible that you couldn’t understand what was going on.

Lack of character development and iffy plot lines, the show did have a solid score in terms of music.  It was a good mix of music of softer music for those more sentimental moments between Shu and Inori (and even Shu and Haruka) and harder rock/techno tunes for battle scenes.  Overall, the soundtrack lent good tunes and helped flesh out a lot of the scenes in the show. 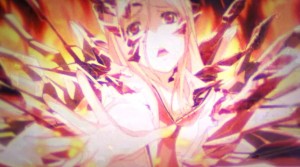 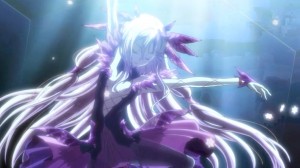 Despite its’ downfalls in character development and the plot generally being fairly confusing and too rushed at times, Guilty Crown was a fairly good show to watch.  The animation was gorgeous and the soundtrack was nice to listen to.  However, because of the incredible amount of hype that was going around for this show once the trailers were released, it fell considerably short of our expectations.  Because of this reason, we’re forced to give Guilty Crown a respectable B-grade.