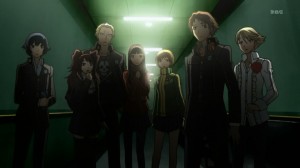 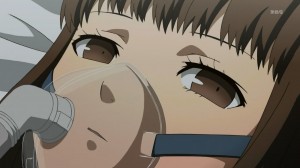 Welcome to the “holy crap” portion of Persona 4. Things had been going so well to this point with simply going in and rescuing whoever they had to from danger. Making the shadows mentally attack the victims helped to keep a sense of danger, but I’m sure everyone figured that nothing bad could possibly happen. They had a super persona user in Yu and the group is pretty well balanced as well.

That piece of garbage killed Nanako! What else can you say other than that? There was just a bad feeling about this situation from the moment she was taken. All the characters needed time to physically recover when they were taken, but Nanako is younger than they are. Her body was hit by a cold, then by the trauma of being kidnapped, thrown into the TV, and then she was hit by all those shadows when Namatame absorbed them into his body. They’ve worked so hard to make everyone care about Nanako and then end the episode with a shot to the gut.

The episode just ends with that flat line. The real problem is Nanako is being affected by something that medicine can’t comprehend. How do you explain how she was bombarded by shadows or even know what kind of effect that would have on her body. Also its possible the fog leaking out might have kept her body from recovering. This episode just reminded me how I felt at that point. All those Personas that Yu has at his disposal and what good are they in this situation? The only thing Yu can do is hold her hand and ask her to keep fighting. She goes flat-line before Dojima can race his seriously injured body to her side. 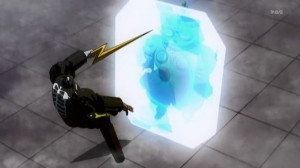 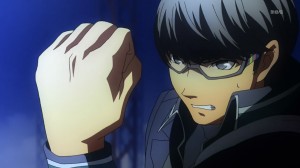 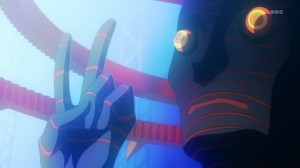 I have to say that’s one way to shorten a dungeon. Instead of racing around inside of that place they just have the fight pretty much at the entrance. But considering the lack of time that was necessary. The conflict between Namatame and the group was one where the group really couldn’t understand this guy at all. Just going on and on about saving people. Maybe a line of thinking that he was saving them through death. How they might end up if he left them alone could mean they were going to self destruct eventually. How long could Chie and Yukiko keep up their friendship while thinking the way they did? Kanji was going to continue going down a dark road unable to face his desire to be accepted. Rise would have stayed depressed and pretty lost in terms of where her life should go. Naoto as well wouldn’t be able to accept herself. Of course whatever his intentions the likelihood of them dying doesn’t make that kind of thing worth it. You can’t just peacefully face your shadow after all. Besides the most logical thinking is that guy is utterly nuts. You don’t need any complicated test to see that guy is clearly unhinged.

The fight was pretty good considering they were fighting a floating…hippie. They took care of what made this guy such a dangerous threat. Nothing like having your allies turn against you. Of course even worse if its someone like Yu who can change up Personas. Though at least the whole group combined should be able to hit some kind of weakness in whatever he calls out. Of course he can also hit their weak-points and swap in a hurry. But damn he definitely didn’t have the ability to just grab almost the entire team in one go. 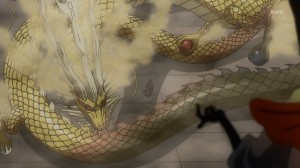 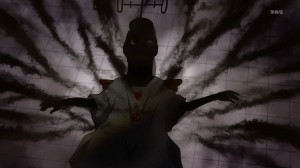 Great move though by Yu to just smash that thing. Of course it took Nanako’s help in a sense for him to do it. Still burning his hand on that thing was worlds better than letting her fall to her death. I liked how Dojima also played a role in helping Yu protect Nanako. Kohryu was one persona I really wanted to see used in this situation and so I’m glad they made use of it. Sure it took a lot of hits to free the team, but totally worth it. Nanako also played the key role in ending the fight with her Justice arcana clearing up the berserk shadows.

Namatame definitely was a tough guy to bring down. The shadows actually came right to him and turned him into a monster. Completely different from the other characters or Mitsuo who had their shadows appear and then they go berserk. Of course Nanako was an exception herself as well. No shadow turned up for her and that’s good since they really didn’t have time for another fight here. Maybe because she was too young for a shadow/persona to have developed yet. 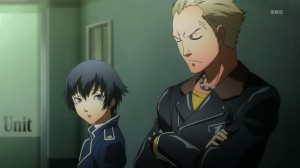 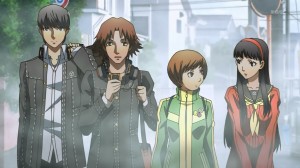 Not that I don’t think that Kanji was right, can’t help but think he’d only say something like that because he likes Naoto. If someone like Yukiko was in that pity party he probably would have stayed silent and someone else would have had to speak up. Though in the end the words were right. It’s not like feeling sorry for themselves and self-blame will resolve anything.

The ability for this series to time skip is truly amazing at times. I still don’t like the series for having Nanako put in danger on my birthday (Nov.6) like that. That calendar is handy though, they can skip 2 weeks into the future with no problem. But that did allow for the fog situation to get extreme. It goes from a pretty regular situation to almost no visibility. The fog only appeared after the long period of rain which signaled the last chance to save people (but since they usually saved them right away that wasn’t really noticeable). But now the fog is constantly around and even worse they can see through just fine with those glasses that should only work on the other side. 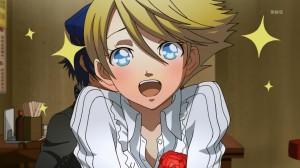 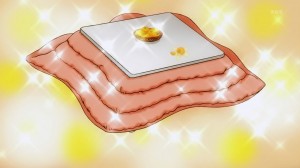 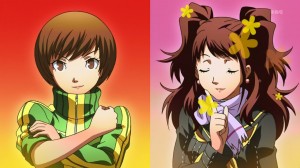 I just love how Chie has breakthroughs without even thinking about it. It makes a lot of sense, but the implications are so crazy one wouldn’t normally say it. If the fog from the other side is leaking out who knows what kind of effects it might have and if things like shadows might start leaking out or something. While the series didn’t show much about it, that fog has pretty hard effects on people who stay in it too long. That’s the main reason why the group needed the glasses so they weren’t seriously weakened while moving around trying to rescue people.

If all that happened in this episode wasn’t bad the idea that the case against Namatame isn’t going well just makes it worse. Even if Namatame admits that he did something the explanation should easily get him the insanity defense. Even if they managed to steer away from the TV stuff the guy just looks mentally insane. The episode just ends like that and now Yu has to go out and tell the group this… 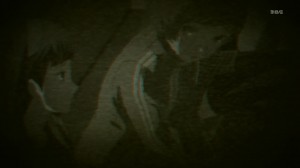 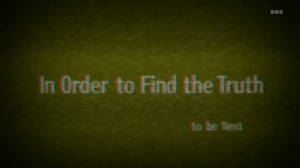 A cold way to end the episode for sure. Can’t say I didn’t expect it to build up to that point. Now the question is what happens next? How does the group respond to this? Next week is going to be one heck of an episode since they could handle it in a few different ways. Once again have to say great episode since seeing what happened here still makes me care. They just brought the hammer down on everyone with how this episode went.
Score: A+