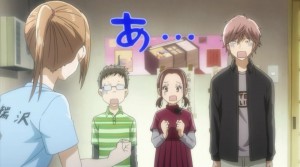 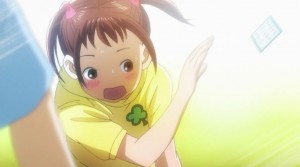 Episode 21 starts off with Chihaya and her friends finishing their exams and preparing for the big qualification tournament that weekend.  Chihaya is relieved to have her exams behind her, but she also seems a bit concerned as to whether she’ll be held back or not.  During practice, she puts her all into it – especially against Nishima since he’s now Class A – but still seems to be making sure she isn’t using her speed.  Instead, she’s concentrating on the placement of the cards and her opponent’s strengths and weaknesses.  Either way, she’s improving her game little by little.  However, our attention is diverted to Taichi – who is reading the cards – because he’s completely memorized the cards and is reading them at random from memory!  Everyone but Chihaya notices, but once the match is over everyone is completely stunned that he was able to read 100 poems at random without messing up a single time.  Nishida tells him to quit being so perfect, which confuses Taichi since he thinks he made a mistake.  Kanade points out that instead of feeling the cards, like herself, Chihaya and Nishida do, Taichi’s weakness is that he can only see the cards as cards.  Taichi considers this and inwardly seems to scold himself for having a weakness in the first place.  As the group leave school grounds after their practice, they’re startled by their teacher hollering out of the second story window.  She’s calling out to Chihaya and is elated to tell her that she managed to pass all of her exams.  Chihaya is ecstatic to hear that, but she’s really touched when her teacher wishes her luck in the upcoming tournament.  Despite the strange looks from the other students in the surrounding area, Chihaya seems even more determined to do her best and not let her teacher down.

The following day at the tournament, everyone is getting paired up with their first round opponents and Chihaya is unsure of what to think of her first opponent.  She’s playing against a 6th grader who made it to Class A by the time she was in 4th grade, much like Shinobu.  Many people are whispering about the child prodigy and placing their hopes on her to make it to the finals and compete against Shinobu.  While Chihaya is considering what to do about her opponent, she’s interrupted by Sudo.  He challenges her to see who makes it to the final round and in the heat of the moment, Chihaya agrees to shave her head if she loses, which causes everyone else to look at her like she’s crazy.  It’s only after Sudo leaves does she realize what she promised, but Nishida promises to defend her honor since he’s facing Sudo in the first round.  Soon, the first round starts and Chihaya and her opponent meet for the first time.  As the first card is read, Chihaya is surprised at how fast the little girl is, but she’s also shocked at how the girl isn’t afraid to commit faults during play.  Chihaya and the girl are on an even playing field for the most part, but Dr. Harada decides to tell Chihaya to use her speed.  She’s confused at first, but quickly gives it her all and overwhelms her opponent.  The little girl’s mother is watching the match and praying that her daughter won’t lose hope because karuta is the only thing that seems to have made her daughter confident in having large ears.  The match quickly ends and Chihaya wins by a landslide, but she’s moved to tears by the little girl’s enthusiasm and the two leave as friends.  Though everyone is talking about how the poor girl isn’t really a prodigy, Chihaya shouts at them and tells them to mind their own business, which seems to cheer up the little girl.  With the first round over for Chihaya, it’s now a waiting game for her until the rest of the players finish.  Meanwhile, we see Arata taking a break at his own qualification tournament, but he’s disheartened when he hears that his mentor and long-time friend wasn’t able to make it past his second round match.  He goes to talk to him, but his mentor says that even if he makes it to the finals and competes against the current King, Arata will be nothing but a contestant.  Interesting… 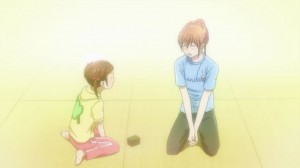 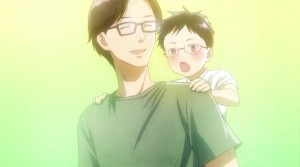 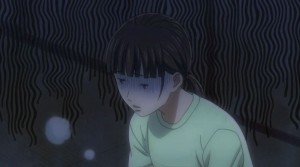 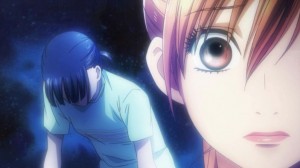 This week’s episode picks up where last week’s left off; round one of the qualifying tournament is completed and Chihaya dashes into the room where Dr. Harada is preparing for his own match to deliver some mind-blowing news.  She’s actually going to be facing off against the former Queen, Yumi Yamamoto!  It really seems like she has terrible luck when it comes to her second round matches.  First she plays against the current Queen and now the former Queen!  Anywho, Dr. Harada tells Chihaya that she knows when she should and shouldn’t use her speed in a match so he’s leaving it up to her to make the decision as to how she plays.  Everyone gets set up for their match and while the players are memorizing their cards, we get to see Yumi for the first time.  She’s rather plain and seems to know it; she almost seems a bit jealous of Chihaya for her beauty, but she also seems wary of her playing style since she had never seen her play before.  Unfortunately, Yumi also seems really depressed about the match since she was beaten by Shinobu only one year after she gained the title of Queen.  As the match starts, we see Taichi, Kanade, Komano and Nishida outside watching the match.  Or rather, Nishida is sulking because he lost by a total of 20 cards to Sudo and still hasn’t quite recovered from playing against his first true sadist (it seems as though Sudo is living up to his nickname).  Taichi is more interested in finding out what Yumi’s playing style is since she belongs to the same karuta society that he does, but before he can answer his teacher drags him off, along with Kanade and Komano.

The windows begin to steam, which causes the players to become slower due to the heat.  Chihaya notices throughout her match that Yumi seems to have lost her passion for the game and that motivates her to play her hardest.  Unfortunately, she also gets ahead of herself and says that she won’t let Yumi get a single card off of her, which causes her to start committing faults.  Because of this, Yumi is able to close Chihaya’s lead fairly quickly.  Nishida is watching the match intently, rooting for both of them, but more or less supporting Yumi.  He’s noticed over the last few years that she’s been crumbling under the inability to meet their teacher’s expectations.  Suddenly, his teacher actually opens a window (partially because he can’t see through the condensation), which helps revitalize many of the players.  He then shouts to Yumi (without actually showing her name) and tells her to play her own version of karuta.  Yumi has to fight the urge to facepalm since he seemed to help out every simple-minded player in the room – including Chihaya – but she understands what he meant by that.  She finally seems to have gotten her steam back and starts taking cards from Chihaya left and right.  She even contests every close call that happens with utter confidence, which usually results in Chihaya backing off.  Outside, Nishida is excited to see that Yumi is back to playing her normal game of karuta.  Apparently, she had always contested everything before she became Queen, but she stopped that once she obtained her title because it was seen as something a Queen shouldn’t do.  Either way, because of Yumi’s new-found confidence and the hope that she’ll be able to face Shinobu again and potentially win her title back causes Chihaya to get overwhelmed and ultimately lose the match.  She’s stunned by the turn of events, but she also realizes her mistake; she shouldn’t have said she wasn’t going to let Yumi take a single card off of her because she is the former Queen and got that title for a reason. 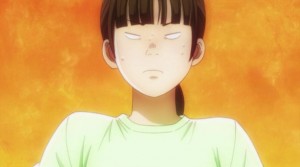 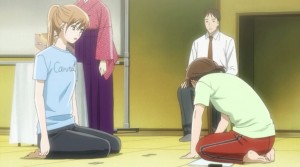 Opinion:  Over the last two weeks, we saw Chihaya grow quite a bit throughout her matches.  Her match against the younger kid showed the fact that even when playing against someone like a prodigy, she has an ability to win so long as she pays attention and only uses her speed when necessary.  However, in her match against Yumi, she learned that she really shouldn’t get too full of herself.  I honestly think that was her downfall in that match.  Sure, she was able to get 5 or 6 cards from Yumi in a row, but Yumi was the Queen for a reason.  Seeing Yumi get her passion and drive for the game back was interesting and it also showed how people who play anything competitively can buckle under pressure from their coaches.  Overall, it was an interesting couple of episodes though not a lot happened in terms of plot.  It’s a shame that Chihaya won’t be able to play against Shinobu, so I’m interested in seeing how the rest of the series turns out.