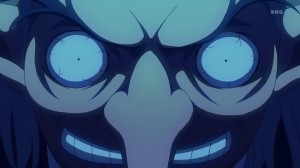 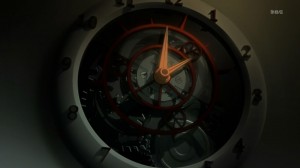 If any episode signaled the end of silliness for a series it was this one. Not only did they figure out who threw people into the TV, but they embarked on their biggest rescue so far in the series. This time they have to save Nanako and nothing is going to stand in their way in order to accomplish that. Sure, they had plenty of reasons to save the previous victims, but this just feels like a completely different level. The series has done its job of making people care about this girl and wanting to save her.

From the start this episode just turned things back in a serious direction. Not like I needed Igor or Margaret to remind me that we’re almost out of time XD. But good that the group discussed that letter and warned Yu. After all any time a criminal of this level knows where you live the danger is raised. Of course if it’s only throwing into a TV then Yu would be fine, able to hang out with his Persona until help arrived. Of course it’s not only him at risk here… 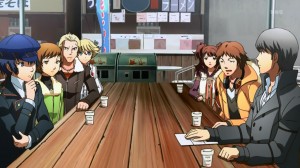 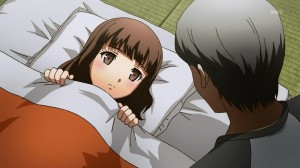 Of course it’s not like they can stop focusing on the character focus. Naoto got some attention this time since it did return to being about the case. No surprise that she gets caught up in the mystery side of it being a detective who has been involved with numerous cases. Especially when involved with murder cases there just has to be a level of emotional detachment. Instead of thinking about the danger Yu would be in she has to think about what this means to the case and put the puzzle together. Doesn’t mean she doesn’t care, but being without friends for so long and her connection to solving crimes its not surprising.

Seeing that bastard outside with Nanako early in the episode just sent some chills up my spine. It wouldn’t mean much without knowledge of what was to come though. Still it does help piece things together in your head. It’s just too easy for someone like Namatame to get close to people. After all people in uniform and those you see often (delivering things) gains trust. 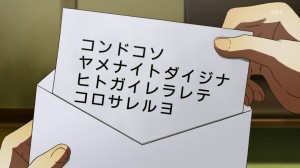 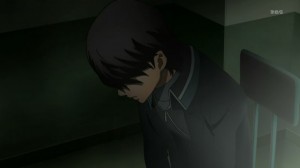 That letter really did make everything go bad in this episode. Hard to tell how things might have gone differently, but even still it contributed. A detective like Dojima wouldn’t be able to ignore something that suspicious especially with the message “if you don’t stop, this time someone close will be put in and killed.” You don’t need to know the specifics to warrant some extreme action. Especially with Yu becoming part of the family some extreme action is necessary. He doesn’t want Yu to get hurt by being involved in this situation. He’d had suspicions for a while now, but the letter pushed things over the limit. It was physical evidence that he was involved in something serious.

Unfortunately the truth does not convey well in this kind of situation. Hard to say the truth without it sounding like a lie. Naoto didn’t believe the drunken ramblings when she heard it and even though Yu was clearly not drunk…it’s hard to swallow. Has to be frustrating for Yu, he wanted to tell the truth but it wasn’t believed. Hurt for Dojima too who felt like even after all that happened that Yu still didn’t trust in him. 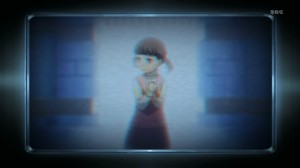 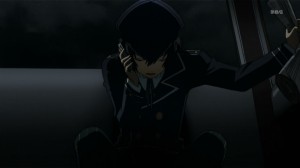 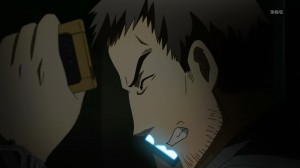 Now frankly the most chilling moment came when Yu saw the Midnight Channel inside the interrogation room. I mean is there a more terrifying thing than being trapped and seeing something like that? Well sure, but it was still pretty damn chilling. We’re talking about seeing Nanako of all people on that thing. Of course everyone else was in a panic and they weren’t trapped at the time. Once again the Midnight Channel showing those who will be taken makes an impact. We had more obvious cases with the earlier abductions, but in Nanako’s case it was much more subtle. A quote and voice instead of a full image. I can’t blame Naoto for not figuring it out. Everyone else was visibly shown on TV before their capture so naturally you’d make assumptions based on past examples.

Finally the anime got to portray the personal panic you felt when realizing Nanako was a target. The game can only do so much with a silent protagonist (minus you picking from statement choices) in that kind of situation. This really showed how frustrated and anxious Yu was about this situation. He didn’t want to wait and figure out the facts, but race out and find Nanako! Of course Naoto was right in them figuring things out, but the feelings were only natural. 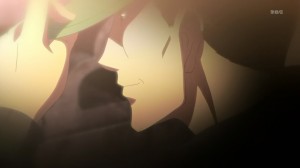 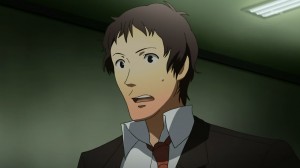 Thank god Naoto was there to beat Adachi in terms of wordplay. They really didn’t have time to goof around and let that idiot obstruct them. The important thing was piecing together the facts and figuring out the culprit from them. Just like the rest Nanako opened the door and was captured. But unlike the others she would only open the door for a select group of people. Yukiko lives at an inn, Kanji at a store, same for Rise, and frankly Naoto was expecting the culprit. Besides being teenagers they are more likely to open the door to at least see who is there. Of course they cut through some of the speculation like discussing different car options. But Yu quickly realized that it was a delivery truck. Of course with a town like that probably only a few companies would deliver things around so people would be used to seeing the same truck just about everywhere. Then it was easy to move towards the suspect Namatame Taro. A direct connection to the first case which makes him suspicious already. One could suspect that he intended to kill Yamano and then followed the pattern for the rest of the victims. 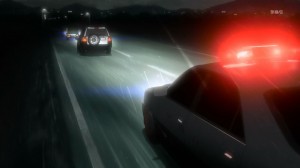 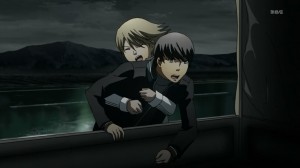 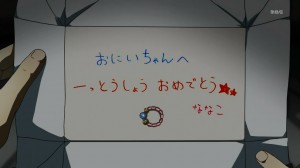 The car chase was pretty good considering you don’t see many cars at all in the series XD. A really intense moment for everyone since Dojima is trying to rescue his daughter and now Namatame has the police on his tail. That crazy bastard flipping his car so he could then escape in to the TV….Even worse that Dojima was seriously injured by that insane stunt.

Once again it was great to see the real panic and desire to save Nanako that very second out of Yu. Thanks to all the focus she has gotten it’s a desire that should be shared by viewers as well. If people weren’t physically holding him back he would have jumped in right then and there. I’m almost surprised he didn’t just go in himself and tell Rise and the others to go in the regular way and just find him later. Still I like the anime’s way that you could go that very night and save Nanako. I don’t care if she’s ‘safe’ until the fog lifts over there, this is an emergency situation! That letter and present just added to the emotion of the moment. It’s always been clear how much she cares about Yu and the feeling is mutual. 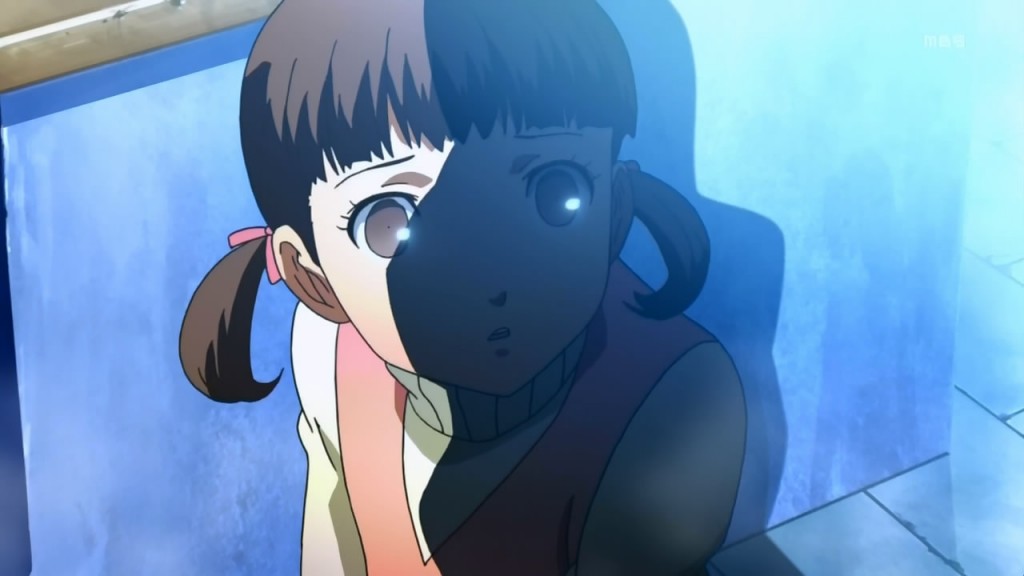 If nothing else this episode signals the serious mode for the series. No more relaxing and laughing. Right now they have to save Nanako from that lunatic Namatame without a moment’s rest! I’d hate to call an episode where Nanako got captured one of the best of this series, but it sure felt that way.
Score: A+