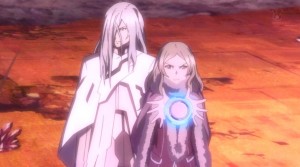 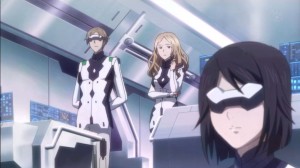 After the previous episode’s cliffhanger, I wasn’t entirely sure where the rest of the series would go.  Is Shu going to die?  Is Inori going to go back to Gai although he’s obviously been brought back from the grave and isn’t who (or what) he was before he died?  Why did Haruka let this happen?  What is Arisa doing cooperating with GHQ in the first place?  With so many questions, I was really eager to see how this episode would turn out.  It picks up where we left off last time; Shu has had his arm cut off and Gai now has the power of the King’s Mark.  Inori cries out for Shu and tries to rejoin him, but is unable to because her own Void is pinning her to the ground.  Overhead, the UN is releasing their fighter jets to drop bombs on central Tokyo and stop GHQ – and the Virus – from getting out of hand.  Someone calls out to Gai and he releases Inori’s Void and is somehow able to draw out three people’s Voids and combine them into a missile.  He launches the newly created Void at the fighter jets and missiles that are heading towards them and he is able to hit the fighter jet.  When the Void explodes, as expected, the student’s whose Voids were used turn into crystals and implode, effectively killing them.  Daryl and the other Endlave pilots are actually given the order to protect Gai at any cost, which bewilders Daryl and causes him to go beserk.  He ends up charging Gai trying to put a stop to him and protect Tsumugi in the same blow, but his fellow pilots shoot at him, but thankfully they were able to use the emergency bailout system to save his life.

Argo, Ayase and Tsumugi are watching everything unfold and are completely bewildered by what’s going on but are helpless to put a stop to any of it.  Many of the students are surprised by Gai’s ruthlessness, but Arisa steps up beside him and uses her Void to protect him from some stray missiles.  While all of this is going on, Shu and Inori are able to escape, though it doesn’t look like Gai is planning on chasing them quite yet.  The UN Naval Fleets are blown to bits by the Leukocyte and Gai pretty much usurps control of the entire globe by saying that if anyone tries to interfere with his plans, he’ll activate one – if not all – of the 256 Leukocyte satellites orbiting Earth.  Of course, no one is going to argue with him, so for now he seems to have an iron clad control of everyone in the world.  Three days pass since Gai has made his announcement and Shu and Inori are still on the run from the Antibodies.  Arisa, who is now working for the organization Daath – a secret organization that nearly no one knew about until recently – is in charge of their capture, though she becomes jealous about why Gai wants Inori so badly.  Her commanding officer tells her to calm down since Gai doesn’t have to answer to her and there’s no reason for her to be jealous, but that only seems to make her angrier.  Elsewhere, we see Arisa’s grandfather talking with Oogumo and Okina about Daath.  He’s aware that Arisa has joined forces with them and isn’t pleased about it at all.  In fact, he tells his two companions that he’ll need their assistance to take care of some family matters. 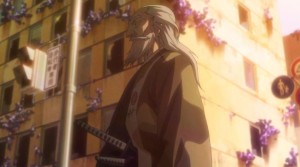 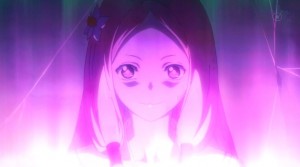 Meanwhile, Inori and Shu seem to be doing fairly well.  Shu hasn’t died, though he’s lethargic and apathetic about anything and everything that happens to him.  Inori is scavenging for food when she sees the Antibodies, but is able to get back to Shu without being spotted.  Inori does what she can to comfort him, but she’s busy fighting off her own demons.  On her way back to Shu, she’s confronted by several men and she blacks out, only to awaken and find them all slaughtered.  Afraid, she flees and finds Shu sitting on the ground looking through a slideshow of photos from happier times on his digital device (I’m still not entirely sure what that thing is supposed to be).  She tackles him, startling him out of his depression-induced stupor and he starts to worry about her when she attempts to pull his pants down (presumably to rape him).  Inori starts out of her trance, which can only be caused by Mana, and starts sobbing.  Shu tries to comfort her the best he can, but it appears that neither of them are faring very well with everything that’s happened recently.  Later, Inori finds herself alone facing a mirror and is shocked to see Mana herself staring at her.  Mana mocks Inori, calling her a copy and a monster, which terrifies Inori but she’s unable to tell Shu what is going on with her since it will only cause him to worry.  Instead, she’s determined to prove that she is herself and not just a copy of Mana.

Elsewhere, Arisa’s grandfather and Okina pull up beside the command center that Arisa is stationed in.  Okina stages an attack on the grunt workers so that Arisa’s grandfather has time to get her to and kill him, removing the dishonor and shame that she has caused from his family name.  Not only is he in full kimono with two katana, but he’s a total badass for an old guy!  He confronts Arisa and says that she has caused their family shame and dishonor and though he can’t stand it, he can’t sit idly by while she drags their name through the mud.  He draws his sword and takes out several men on his way to Arisa, but is felled by Arisa when she shoots him.  As he lays dying on the ground in front of her, she doesn’t even show a bit of remorse which makes me wonder what happened to the sweet girl we knew in the beginning of the series.  Elsewhere, Shu hears Inori singing on a balcony and goes to listen.  He’s moved to tears over her song, though we’re not sure if it’s because of the guilt that he feels over what happened or if he’s just in one of those moods where everything makes him emotional.  Inori comforts Shu and tells him not to worry about her or feel guilt about what happened because it wasn’t his fault.  Shu still takes the blame, but Inori shushes him.  She tells him that she’s going to face Gai but when Shu protests, she stuns him (likely using the powers that she’s able to access because of Mana).  She lays him down gently and kisses him for the first time before saying farewell.  She makes herself known to Arisa, who commands several Endlaves to attack and capture her, but Inori is able to morph into a “monster” of sorts.  She takes out all of the Endlaves and says that though she is indeed a monster, she’s not a copy nor a fake because Shu loves her for who she is.  Gai uses a Void to capture an enraged Inori, fulfilling his goal of bringing her back to him.  Shu awakens sometime later and finds Inori’s hair clip beside him and grows determined to rescue her from Gai. 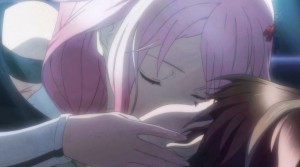 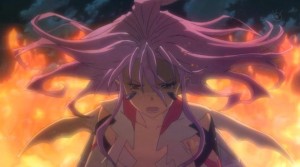 Opinions:  Though a lot didn’t happen in this episode, it did move the plot along fairly well.  It’s clear that Mana is beginning to fuse with Inori on a genetic level, which is giving Inori her powers as well as causing her to black out.  But the question is why is that happening? And what is Gai planning on using Inori for?  We found out that Haruka basically let Shu get his arm cut off in an attempt to protect him from the obligations of being King, but what exactly do those obligations entail?  And how is Gai even able to combine several Voids into one unit?  Is he truly the “one true King”?  There’s a lot of questions, especially about how Shu is even going to attempt to rescue Inori.  He’s missing a hand, has no powers left and I’m pretty sure that if he’s captured he may be killed on sight.  This is definitely taking a turn that I didn’t forsee, so I’m eager to find out how everything turns out.