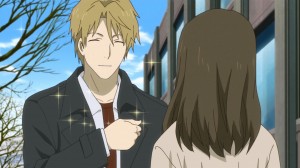 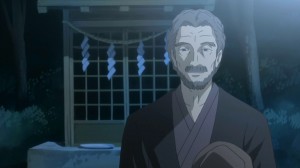 Natsume is just too reckless at times. It’s crazy to have him get upset about others putting themselves at risk for him and then he does suicidal things like this. It certainly shows how much he has changed being willing to put himself in danger for youkai, but it’s just too crazy. He’s a great guy, but sometimes he has to think logically of who is more durable. He already got hurt from the fall and now he gets himself taking the worst of that trap.

Still, it was good to see Natori once again. It’s not like this is the first episode that Natori has been involved with, but still good to see him. This episode was also a good reminder of how Natsume isn’t the only person who has changed during the series. Natori is a different guy than he used to be, though Hiiragi still hopes that he’ll change even more. The old Natori would not have had a problem with just sealing away the more dangerous of the gods. Of course really if it was possible the old Natori would have been fine with obliterating a troublesome youkai. The fact that he currently seals away what he can is by itself a great step. In this case he really would prefer to undo the seal of the other exorcist and balance things out. 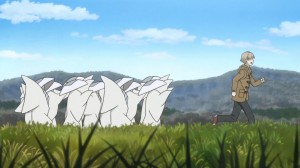 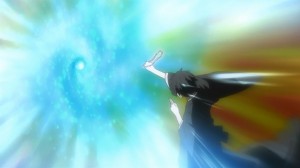 Unfortunately for Natori the other exorcists don’t feel like he does. The one who gave him the job probably isn’t as bad as the Matoba clan, but he still timed it so Natori would have to seal the god. Logically it makes sense since instead of gambling you can make sure that nothing bad would happen. Still it sucks for Natori that he’s getting saddled with a tough job like this. The other exorcists probably realize how Natori has changed and thus did this. They need someone of his talent, but they don’t want him to just free the other god and let the competition resume.

No surprise that Natsume once again gets himself into more trouble. He just can’t ignore what he hears and keep walking. Instead he waited and the white hats charged at him. One has to assume they eventually stopped and explained the situation. Natsume of course can’t turn others down when they ask him for help. I mean long as its not something evil he’s going to take action and the worst case scenario here would be disastrous. 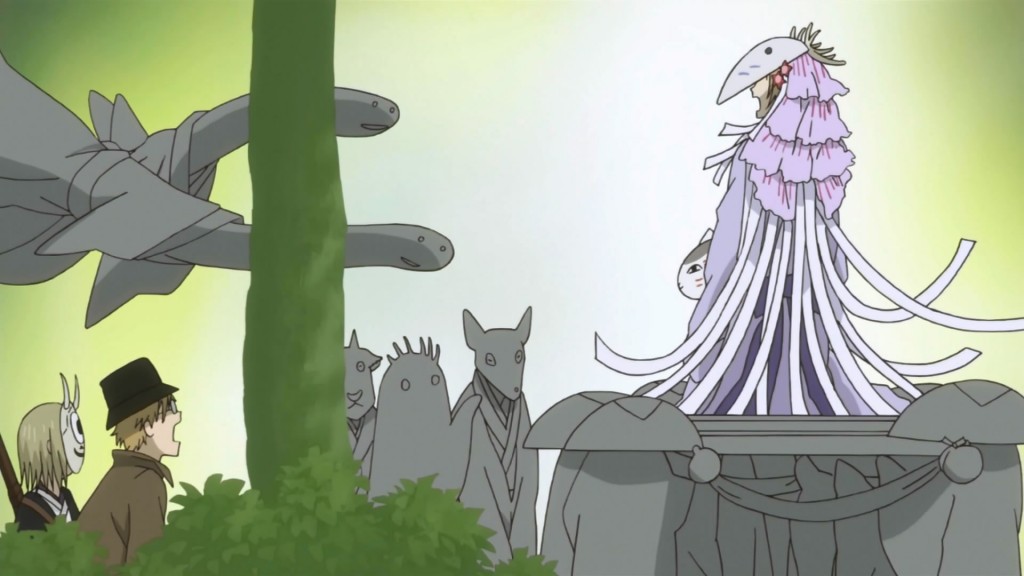 There are just no words...

I couldn’t help laughing though when Natori spotted Natsume in that disguise. He really had to doubt what he was seeing. Sure, he knows that Natsume can be reckless, but seeing him dressed up like that deserves some pause XD. Plus every time he finds Natsume involved in these situations Natori immediately gets worried. Natsume may have the seniority of worry when it comes to his normal friends, but Natori does when it comes to Natsume. Having done that job for so long he knows how dangerous it can be and having someone who has no training like Natsume out there is a bit scary. Plus now Natori really has to force himself to find the other god since he doesn’t want to take an action that Natsume won’t like. 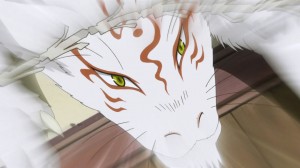 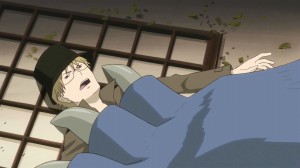 This episode did show how there really isn’t much teamwork between Madara and Natori. Both want to protect Natsume and take care of the threat, but they can’t actually work together too well. Though I suppose it’s not too surprising since they don’t team up that often. Most of the time Natori has a good sealing plan in mind and Madara only has limited involvement in it. The idea of Natori and Nyanko moving together to unseal the god is a bit scary. They don’t really like each other after all. Still Nyanko won’t let anything happen since Natsume cares about what happens to Natori. 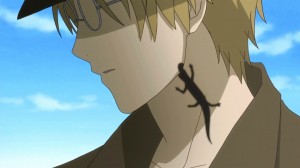 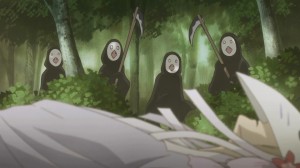 In the end this was another good start to a two-parter. Though the fact that we’re in another mini-arc reminds me how much closer we are to being done with this season of Natsume. But for now can just look forward to what should be a pretty exciting episode. Still I have to say the episode didn’t end on a good note. We have an unconscious Natsume and Hiiragi along with some not very friendly black hats. Hopefully they get some help or this situation could get very bad.
Score: A