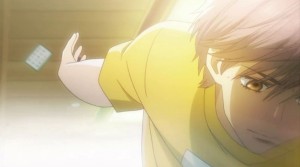 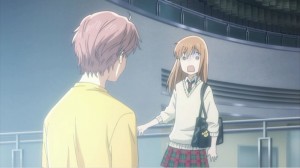 This week’s episode starts off with the karuta club finishing their first round of matches and heading to a quick 15 minute break before the next round.  As everyone heads out to the hallway to either grab a quick snack or drink, Chihaya stays behind and tries to focus on her technique.  She’s finally gotten the hang of the two and three syllable breathing technique with the cards, but she realizes she still needs to work on her accuracy.  She also goes over the fact that with Kanade and Komano, she’s able to go back up to 7 spaces from the playing field and still be able to reach the last row of cards easily, but with Taichi and Nishida, she’s only able to go back 3 spaces so far.  She proceeds to practice her technique by visualizing the cards on the mat (like Arata did as a child), but instead of practicing alone, she visualizes Shinobu and tries to compete against what she remembers of her speed.  As she’s doing this, the others are watching her in stunned awe.  Komano makes the comment that if Chihaya would use even 1/10 of the concentration and dedication she shows karuta on her studies, she wouldn’t be 5th from the bottom of their entire class.  Speaking of which, Chihaya goes to speak to their adviser about the club going to the last tournament in the division before the qualification tournament for who is going to play against the master and queen.  Their adviser seems happy that they’re all so dedicated, but tells Chihaya that she can’t let her go because she’s on the verge of failing all of her classes and is liable to be held back.  Chihaya doesn’t understand why at first, but when her teacher reminds her that the first day of exams is on Monday, Chihaya starts to panic.  Her teacher smiles and tells her not to worry since she managed to find her a tutor.  As luck would have it, Chihaya’s tutor is none other than Komano.

That afternoon, Chihaya is lamenting the fact that she can’t go to the tournament but Nishida isn’t able to either since he’s on the verge of failing both English and math.  Komano agrees to tutor Nishida as well, but only if they call him Komano-sensei.  Kanade doesn’t seem to have any problems with her classes, but since the tournament is only for A and B class players, she wouldn’t be able to go and compete anyway.  Upon finding out about this, Taichi says that he’s heading to the community club since they won’t be practicing and he really needs to practice if he wants to advance in rank.  Nishida brings up the fact that if you place second in two tournaments in a row, you automatically get to advance to the next rank.  Taichi laughs, saying that it’s a rule of their community to win a game before advancing in rank.  Nishida starts to tell them what happened when his own community club found out he advanced to Class A, but trails off when he remembers how his teacher scolded him for allowing his friends to bring back his super competitive side.  Taichi nods in understanding and heads to the club to practice while Komano faces the difficult task of tutoring Chihaya. 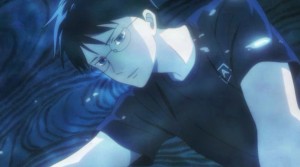 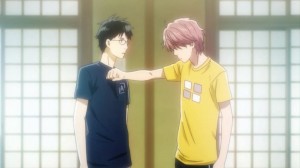 The next day, Chihaya, Komano and Nishida are all in the library studying (more like cramming at this point) but Chihaya can’t stop thinking about the tournament and how Taichi will be all alone all day.  However, under Komano’s constant watch, she’s unable to sneak away to go to the tournament and cheer for Taichi.  Meanwhile, at the tournament, we find that Taichi has won the first two rounds of the tournament and is feeling rather confident about the whole thing.  He runs into Dr. Harada, who is also practicing for the qualification and the two chat for a bit before Dr. Harada brings up the fact that Taichi should have seen someone familiar.  Taichi scans the room and we see that Arata is there competing!  The two stare at each other for a moment, but Arata’s teacher – who turns out to be an old friend/rival of Dr. Harada – runs over and the two older men start chatting happily.  Arata and Taichi start off awkwardly, but eventually Arata gives Taichi his cell phone and email address and asks him to give it to Chihaya if he sees fit.  This catches Taichi off-guard and of course, it’s right before the next round.  Meanwhile, Chihaya has managed to slip away to run to the tournament by saying she needed to go to the restroom.  She sends Komano a text message to apologize, but Komano is furious about this (of course, he doesn’t exactly let on about that).  When she finally arrives at the tournament center, she finds Taichi sitting in the lobby and asks him how he did.  Turns out, he lost in the third round and lost his last chance for advancing a rank before the qualifications, which upsets Chihaya.  However, as soon as Taichi mentions that Arata is there, she seems to be in a trance and goes straight for the playing hall to watch him play.

She enters and sits down to watch Arata’s next match and Taichi follows her.  At first, neither of them say anything, but Chihaya suddenly grabs Taichi’s wrist and shakily says that Arata’s back, just like he promised.  This brings a tear to both of their eyes and Taichi leaves the room, though Chihaya is enthralled with how Arata plays.  The way she describes it, it’s like watching someone move through water.  Each motion is fluid and calculated, without making much noise, if any at all.  As Chihaya is busy watching the match, Taichi is sitting in a room and stares at the phone number Arata gave him to give Chihaya.  Dr. Harada notices Taichi’s frustration and seems worried about him, but doesn’t say anything yet.  After Arata’s match, Taichi and Arata find Chihaya furiously scribbling down notes based on Arata’s movements.  This makes Arata smile and he tells Chihaya that he’s happy to see that even when she’s not playing, she’s fired up.  Of course, Kanade comes out of nowhere (she came to watch the tournament and show Taichi the club’s support) and scolds Chihaya for skipping out on her tutoring with Komano.  As she drags Chihaya off, Taichi and Arata have a small chat.  Taichi hands Arata the phone number back, saying that it’s not fair of him to ask Taichi to decide whether or not Chihaya needed his phone number.  Arata blushes and says that he figured that since he was gone for so long, the two of them were already dating.  When Taichi says they aren’t, Arata almost looks relieved to hear that.  The two say goodbye since Arata needs to head home, though Taichi still seems upset about his loss.  On the train ride home, Kanade continues to scold Chihaya and makes her read their textbook on the way back to the school.  Chihaya paused and notices a poem that’s from karuta and comments on how it almost feels like a love poem; she even goes on to say that she understands how the author felt since she feels the same way whenever she sees Arata.  Kanade is moved, but continues to make Chihaya study on the way back to the school.  After the tournament is over, Taichi heads to the train station with Dr. Harada and their other clubmate.  Dr. Harada offers Taichi the opportunity to advance in rank, even if it’s against the norm for their community club but Taichi declines.  He says it’s because he wants to be able to become a person who can advance even through their frustrations. 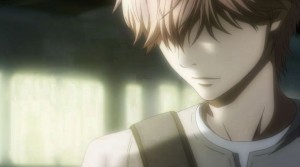 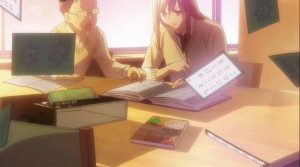 Opinions:  Well this was certainly interesting.  I was only half expecting Arata to show up, but I’m glad he did.  It seemed to be a bit of a reality check for Taichi, though I was bummed that he didn’t win the tournament and advance in rank.  I’m kind of surprised that he passed up Dr. Harada’s offer to advance in rank though!  I  had to laugh at Chihaya throughout the episode though; not only was she banned from playing in the tournament, but she had to cram for exams because she’d fail otherwise.  I don’t know why, but I found that extremely amusing.  That aside, seeing her reunion with Arata via karuta was incredibly touching.  Not only did she learn some valuable information from watching him play, but the fact that Arata finally came back to karuta like he promised was a nice touch.  The whole scene where Arata asked Taichi if he was dating Chihaya was cute and it makes me wonder if this means Arata has feelings for Chihaya as more than a friend.  It’s pretty obvious that Chihaya may have romantic feelings for Arata since she feels as if she understands how the poet who wrote the love poem (the one she read on the train) felt while writing it.  With the qualification tournament coming up quickly, it’ll be interesting to see how things will go, especially now that Arata is finally back in the picture.